Secretariat follow-up and photo of winning ticket: What was Big Red's number in his final race?

- Jockey Eddie Maple on Secretariat
as quoted in the American Press


He might have taken to the air and flown.


On Sunday October 13, 2010, I wrote about the great Secretariat and his last race in the Canadian International at Woodbine Racetrack here in Toronto, Canada. I mentioned that I was at Woodbine on that cold and rainy day to witness Big Red’s final race. I have received a great deal of response to that posting and many people seem to be interested in Secretariat’s number in that race. I can tell you that it was number 12. 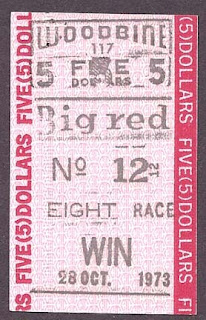 I have since viewed the movie Secretariat. I enjoyed the film immensely.  I was disappointed. although not surprised, that the legendary racehorse’s final race was not depicted in the film. I guess the race was not deemed of great importance to American audiences.  John Malkovitch, wo played trainer Lucien Laurin, didn't quite suit the part.  He appeared too tall to be a former jockey and he failed to convince me that he was a francophone from Quebec.


Secretariat’s regular rider, Canadian Ron Turcotte, did not ride Secretariat in his farewell race on October 28, 1973 because he was under a five-day suspension for a riding infraction in New York. Turcotte was replaced by Eddie Maple who guided the Triple Crown winner to a 6 1/2 length victory. According to an Associated Press story by Ed Schuyler Jr., Maple, now retired, remembers being nervous on that October day in 1973. Although Maple says he “wasn’t any more nervous than anybody else would have in that situation,” he admits that before the race he thought, “If he doesn’t win, they just might tar and feather me."
Eddie Maple, a native of Ohio, retired in 1998 with 4,398 career wins to his credit.  He was inducted into the National Museum of Racing's Hall of Fame in  2009.  Eddie will always have the distincton of being the last jockey to ride Secretariat.  Nothing and no one can take that away from him.