Humour in a world of waning beliefs remains like Hope still left at the bottom of Pandora’s box when all the evils of the Gods flew out from it upon the world. 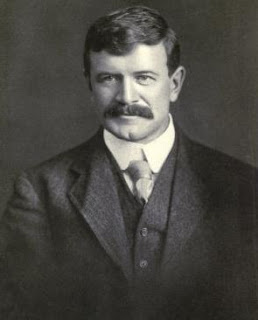 Would you expect a Canadian economist to become one of the English-speaking world’s great humorists? Well, Stephen Leacock did exactly that. After the death of Mark Twain in 1910, this professor of economics and political science became the most popular writer of English-language humour on the planet.

Stephen Butler Leacock was born at Swanmore, England on December 30, 1869. He came to Canada at the age of six with his family and was raised on a farm near Sutton, Ontario, south of Lake Simcoe. Leacock’s father, Peter, was an abusive alcoholic. He eventually abandoned the family, leaving his wife Agnes to raise their eleven children.

After studying economics and political science at the University of Toronto and the University of Chicago, Stephen Leacock obtained his PhD in 1903. That same year, he joined the department of economics and political science at McGill University in Montreal. Leacock rose quickly in the ranks at McGill and became department head. He remained in that position for 33 years, until his retirement in 1936.

On August 7, 1900, Stephen Leacock married actress Beatrix (Trix) Hamilton. Trix was a niece of Sir Henry Pellatt, the man who built Toronto’s Casa Loma, the largest castle in North America. Leacock and his wife had one son, Stephen Lushington “Stevie” Leacock, born on August 19, 1915. Trix died of breast cancer on December 15, 1925 and Stephen was left to raise the ten-year-old boy. Born with a lack of growth hormones, Stevie was very small in stature, looked much younger than his age, and was a constant source of worry for his father.

Stephen Leacock was a prolific writer and he produced a great deal of non-fiction material. He is best known, however, for his humorous fiction. Literary Lapses, published in 1910, was his first collection of humorous stories. Leacock’s masterpiece was Sunshine Sketches of a Little Town (1912) in which he affectionately satirized the customs and behaviour of the people of a small town in Ontario. Although Leacock called the fictional town “Mariposa,” it was a thinly-disguised model of Orillia, Ontario.

In addition to his many essays and academic works, Stephen Leacock wrote popular biographies of his two favourite authors: Mark Twain (1932)  and Charles Dieckens: His Life and Work (1933).  Yet, it was Leacock's very first book that proved to be his most profitable.  Elements of Political Science (1912), a university textbook, was translated into seventeen languages.

Stephen Leacock died of throat cancer in Toronto on March 28, 1944. He was 74 years old at the time of his death and was survived by his son, Stevie, who died in his fifties.  As a tribute to the great Canadian humorist, the Stephen Leacock Memorial Medal for Humour was established in 1947. It is presented annually to the best book of humour written in English by a Canadian writer.

During my years working at the library of the Toronto Star, I became acquainted with two winners of the Leacock Award – the Star’s late humour columnist, Gary Lautens and another long-time columnist, Joey Slinger. Gary, who died in 1992, won the award twice and was such an admirer of Stephen Leacock that he named his first-born son “Stephen”.

If you are in the Orillia area, I strongly suggest that you visit the Stephen Leacock Museum and National Historic Site. It was Leacock’s summer home and is situated on the shores of Lake Couchiching. Stephen Leacock found peace and comfort there and did much of his writing in the study overlooking the lake. The house was built in 1928 on the banks of Old Brewery Bay. I have visited the Leacock home twice and enjoyed it immensely. After touring the house, you can eat at an outdoor cafe there and wander out to the boathouse.

To view a website containing information and photos of the Leacock home, click on the link below.

To view a CBC archival site and listen to the voice of Stephen Leacock reading, click on the link below.
.

http://archives.cbc.ca/arts_entertainment/literature/clips/3540/
- Joanne
Posted by Joanne at 3:38 AM