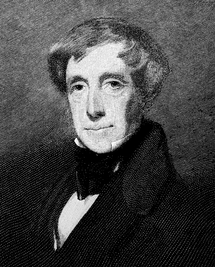 'Twas the night before Christmas, when all through the house,
Not a creature was stirring, not even a mouse.

These are the opening lines of the famous poem A Visit from St. Nicholas. The presumed author of the poem is Clement Clarke Moore (1779-1863), a scholar and professor at Columbia College, now Columbia University.

A Visit from St. Nicholas was originally published anonymously in a newspaper, the Troy, New York Sentinel on December 23, 1823. Clement C. Moore later acknowledged that he was the author, although his claim has been questioned in academia.

According to writer and historian Don Rittner, Moore was cited as the author of A Visit from St. Nicholas, for the first time in the December 25, 1838 issue of the Troy Budget newspaper.  He did not admit to authorship of the poem until 1844 when he was 65 years old and it was published in an anthology of his own poetry, apparently at the insistence of his children.

A Visit from St. Nicholas provides the first detailed description of the physical appearance of Santa Claus, his sleigh and his reindeer. It includes the number and names of the reindeer.

Tonight is Christmas Eve and I would like to pay tribute to a great Canadian who was born on December 24th at the dawn of a new century. Today marks the 110th anniversary of the birth of Joey Smallwood, the first premier of Newfoundland and a Father of Confederation. Born Joseph Roberts Smallwood on December 24, 1900 at Gambo, Newfoundland, he was the eldest of 13 children. The family was poor and Joey’s father, Charles Smallwood, was an alcoholic.

Joey Smallwood became a journalist and began his career in Newfoundland and Nova Scotia. He moved to New York in 1920 and spent five years there working for The Call, a socialist newspaper. Smallwood returned to Newfoundland in 1925 and became a union organizer. In the late 1930s, he hosted a popular radio show devoted to Newfoundland’s history and cultural traditions. His radio name was “Joe the Barrelman”.

Smallwood’s reputation as “The Barrelman” helped him become director of the Newfoundland Confederate Association, which advocated Confederation. He campaigned vigorously to bring Newfoundland into this country and he succeeded. In 1949, Newfoundland and Labrador became Canada’s tenth province. Smallwood served as premier of the province for over 22 years, from April 1, 1949 until January 18, 1972.

The latter years of Joey Smallwood’s life were very difficult ones. He suffered a major stoke in 1984 and lost his speech. He also experience financial difficulties. Nevertheless, he devoted much of his time and energy to producing The Encyclopedia of Newfoundland and Labrador. The first two volumes were published in 1981 and 1984. The second volume was release two months before Smallwood’s stroke and work was suspended until 1987. The five-volume set was finally completed in 1994.

Joey Smallwood did not live to see the publication of the fifth and final volume of his encyclopedia. He died in St. John’s, Newfoundland on December 17, 1991, a week before his 91st birthday.

To listen Peter Gzowski interview Joey Smallwood in 1973, click on the link below.

I visited Newfoundland in the summer of 2001. I was captivated by the rugged beauty of the province and the friendliness and hospitality of its people. Newfoundlanders really have a sense of community. While I was there, a benefit concert was held at the Mile One Centre in St. John’s to aid some victims of an apartment fire. For $15 dollars, I enjoyed hours of Newfoundland music and entertainment.

For those interested in Joey Smallwood, I highly recommend a 1998 novel by Wayne Johnston entitled The Colony of Unrequited Dreams. It is a fictional portrayal of Smallwood’s life.