No, Donald Trump! Canadians do not want the U.S-Canada border reopened now 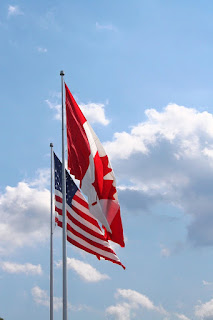 Donald Trump has stated that the Canada-U.S. border will reopen soon.  Yesterday (September 18, 2020),  he claimed that "Canada would like it opened."  "You know, we want to get back no normal business,"  he added.  That same day, Canada's Public Safety Minister, Bill Blair, announced on Twitter that closure of the border has been extended until October 21, 2020 (It was set to expire on September 21st).  "We will continue to base our decisions on the best public health advice available to keep Canadians safe," Blair wrote.

In a July 2020 IPSOS poll, more than 8 out of 10 Canadians surveyed said that they want to keep the U.S. Canadian border closed until at least the end of 2020.  That' was over 80 per cent back in July.  I bet the percentage would be even higher now.

If Trumps thinks reopening of the border is going to happen any time soon, he's wrong!  Canadians do not want the border reopened until the virus is under control.  It is certainly not under control. now, thanks to the negligence, indifference and incompetence of Trump and his supporters.  As I write this, the number of deaths from COVID-19 in the United States is 198,000.  That number will soon reach the grim milestone of 200,000.  Those are the cold, hard facts,  However, the American president's first concern is getting himself re-elected.

Canada's record with regard to COVID-19 is much better, but there has been a resurgence of new cases here lately.  We do not need or want Americans coming across the border and spreading the virus further.  We simply cannot afford to put more human lives at risk.  That is why reopeinig the border anytime soon would be foolish and immoral.

The tragedy is that Donald Trump was aware of the deadly virus back in February.  His words on investigative journalist Bob Woodward's tape prove that he knew.  Trump's voice on Woodward's tape is clear and distinct.  He can be heard telling Woodward that the virus was "deadly." Yet, he failed to act quickly and decisively.  If he had done so, many lives would have been saved.  This was a dereliction of duty of epic proportions.  The president of the United States failed to protect American lives and he should be held accountable for that.

The Canada-U.S. border should not be reopened until the virus is under control in the United States.  That will not happen unless and until Joe Biden is sworn in as president on January 20, 2021.  This is a matter of life and death.  The choice is as stark as that.  So, Prime Minister Justin Trudeau must remain firm that our border with the U.S. will remain closed until he COVID-19 is contained there.