Meditations at Home During the Pandemic #4 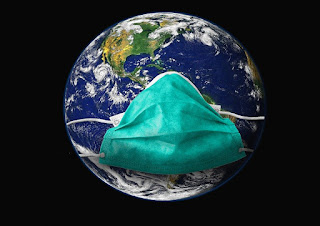 This is the fourth in a series of reflections while I am at home during the COVID-19 pandemic.

Hello to readers from around the world.  Greetings from Toronto, Canada.  It is May 26, 2020 and I have been at home for about ten weeks  now.  Some days are better than others.  Sometimes I feel as if I am in the twilight zone.  Is this really happening or is it a nightmare?  I am trying to keep the faith that better days will come.

I and many others were unable to see our mothers on Mother's Day.  We miss live gatherings with families and friends.  At the moment we have to make do with virtual get-togethers.  We don't have a choice.  Still, there is nothing like a real life hug.  There is no substitute for it online.  A virtual hug doesn't measure up.  Nevertheless, I consider myself fortunate because I have a roof over my head, enough food to eat and I haven't tested positive for the virus.

I freely admit, however, that with every fibre of my being, I long to be free of COVID-19 restrictions.  I yearn to come and go as I please.  I wish I could discard my masks.  I wish I didn't have to see other people wearing masks.  I want to travel or go to a movie theatre.  Yet, I know that this virus is not going to magically disappear.  A reliable vaccine may be on the horizon, but we don't have it yet.  Around the globe, doctors and scientists are working tirelessly re working around If we don't sacrifice now, we will pay later.  Some restrictions have been lifted here in Ontario, but most responsible people know that we have to proceed with caution and prudence.

In the United States, the death toll from the virus is nearing 100,000.  The estimated U.S. population is 331 million people.  Here in Canada, the death toll is 6,637.  The estimated population of Canada is 37.8 million.  The numbers and the facts don't lie. It is a tragedy that the United States of America has the world's worst record on COVID-19 deaths per capita.  It's purported "leader," Donald Trump is leading his country astray and Americans are paying a steep price for Trump's folly.

Trump refuses to accept responsibility for America's poor showing in dealing with the pandemic.  He brags that everything he does is perfect.  He will never admit to a mistake and he will never apologize.  He has referred to himself as a "stable genius."  Well, that "stable genius" has led his country into a state chaos and confusion.  His reckless ramblings have only served to make the situation worse.  He has ridiculously advised people to inject themselves with bleach and to take an unproven and potentially dangerous anti-malaria drug.  Unfortunately, some of his sheep-like followers have heeded his misbegotten recommendations.

There is a great deal of false and misleading information.on the internet and social media.  Some people don't know what to believe and how to separate fact from fiction.  The best way to do that is to listen to the doctors and scientists, not debunked conspiracy theories.

According to a study conducted to the School of Journalism at Carleton University in Ottawa, nearly half of Canadians (46 per cent) subscribe to conspiracy theories including false miracle cures, the idea of a 5G cover-up (5G stands for the fifth generation technology standard for cellular networks which phone companies began employing in 2019) or that the virus was engineered in a lab in China.  They believe in at least one of four myths circulating on the internet.  The co-author of the study, Carleton professor Sarah Everts considers the high rate of belief in conspiracy theories alarming because of the "risk of overwhelming an already overwhelming health system."

I urge you all to keep your guard up and don't pay any heed to internet conspiracy theories or to Donald Trump's blather.  He doesn't know what he's talking about and he doesn't want to be seen wearing a mask.  In fact, he discourages people from protecting themselves with masks.  He has even criticized Joe Biden, his prospective opponent in the impending 2020 election, for being responsible enough to wear a mask.  Trump has stated that American will not be locked down if there is another wave of the virus, as respected doctors have predicted there will be.

Donald Trump is more concerned about his political and financial fortunes than the welfare of Americans and others around the world.  He is willing to sacrifice human lives for his personal own gain.  He doesn't treat all human life as sacred.  The man lacks empathy and he has no idea how to deal with this unprecedented crisis.  He doesn't understand that it is a health crisis, not an economic crisis.  The economic problems will not be solved until the human and health challenges are dealt with first.  He is reluctant to use government assistance to help needy citizens during this terrible time.  What is the alternative to government aid when people are sick and suffering, when they are losing their jobs?  He just doesn't know what it's like to be unemployed with a family to feed and bills to pay.  He doesn't understand how it feels to lose your job and your company health insurance.

I know it isn't easy, but the only way out of this mess is to exercise patience, vigilance and discipline.  It is the only way to deal with a second wave of the virus, which scientists say is inevitable.  Take care everyone.