PHOBIA (noun): an exaggerated usually inexplicable and illogical fear of a particular object, class of objects, or situation

The word "phobia" comes from the Greek word phobos, meaning fear or horror

Number 16 presents a multiple choice vocabulary quiz on phobias.  Choose the correct definition of each word listed.  There are ten words for you to define.  Ready, set, go!

A.  Fear or dislike of the internet and social media

B.  Fear or dislike of computer nerds and information technicians

C.  Fear or dislike of advanced technology or complex devices and especially computers

A.  A morbid dread of being electrocuted

B.  A morbid fear of thunder and lightning

D.  A morbid dread of water

E.  A morbid fear of freezing

A.  Fear of the number three

A.  A condition of vague, nonspecific anxiety: generalized fear

B.  A fear of forests and trees

C.  A fear of darkness

D.  A morbid fear of being lost or abandoned

E.  A fear of loud voices

A.  Fear of famous people

B.  Fear of  public speaking

C.  Fear of being without access to a working cell phone

A.  Morbid dread of pirates

B.  Morbid dread of funerals

A.  Intolerance to light

B.  Fear of cameras

A.  Abnormal fear of birds

B.  Abnormal fear of bees and wasps

A.  Fear of foreign languages

B.  Fear of mold and mildew

A.  Pathological fear or loathing of drums and drumming

B.  Pathological fear or loathing of dogs

C.  Pathological fear or loathing of the colour red

4.  A
panophobia (noun): A condition of vague, nonspecific anxiety: generalized fear - the fear of everything or that something terrible will happen

5.  C
nomophobia (noun): Fear of being without access to a working cell phone


10. B
cynophobia (noun): Pathological fear or loathing of dogs as in "If a person were bitten by a dog, the experience could lead to cynophobia." 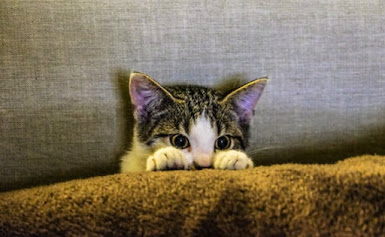