Another four years of Trump or a return to decency? The ball is in your court, America! 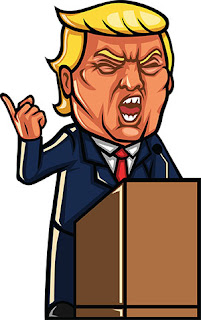 All things must pass and so must the Age of Trump.  Someday, historians will look back at the Trump era and put it squarely in perspective.  They will analyze how a shady businessman, a reality show host, a man who had no governing experience, a man who bragged about groping women, a man who called Mexicans criminals and rapists, a xenophobe and a misogynist, became President of the United States . . . with a lot of help from the Russians and social media.

In 1973, ex-White House Counsel John Dean famously warned President Richard Nixon that there was a cancer growing on the presidency, due to the Watergate break in.  Fast forward some 46 years.  It's 2019 and, tragically, the cancer is back.. It has returned in the form of President Donald J. Trump and his immoral, criminal and unconstitutional behaviour.  Unfortunately, the situation is far worse than during the Watergate era.  This time there is a stain on the very soul of America.  Millions of Americans are cult-like followers of Donald Trump.  They support him no matter what.  Facts and logic won't change their minds.  At his rallies, he sparks their fears and appeals to their basest instincts and rawest emotions.

The United States Senate is controlled by scores of spineless Republicans, 53 to be exact.  There are 47 Democrats (including two independents). The Republican contingent is led by Senator Mitch McConnell, the self-described "grim reaper".  Therefore, it is unlikely that enough Republican senators would put country before party and remove Trump from office.  If the Democratic- controlled House of Representatives votes to impeach the president, it is up to the Senate to make the final decision.  At that point, the conviction of a president and removal from office requires the support of 67 of the 100-member Senate.  That means that at least 20 Republicans would have to vote to convict Trump.  It's difficult to see that happening.

It's obvious that there is something very wrong with Donald Trump.  I am not a doctor, so I cannot offer a medical diagnosis.  However, there is enough evidence to say that, at the very least, he is a malignant narcissist. (One only has to read his incessant tweets for proof of that).  There is also evidence that Trump's cognitive powers are in decline.  For example, he stated that his father, Fred Trump, was born in Germany, when the senior Trump was actually born in the Bronx, New York City, the son of German immigrants, but not an immigrant himself.  Why would the President of the United States forget where his father was born?

Donald Trump makes bizarre comments and refers to himself as a "stable genius."  He often rambles incoherently. No one knows exactly what's wrong with him, but there is certainly something wrong with him, and it's only going to get worse.  He really isn't fit to be president, and that's what's so scary about the man.  Who knows what he's capable of if he really feels threatened or cornered?

There is only one way to wash the stain of Donald Trump from America's soul.  In the 2020 election, voters have to reject his bid for a second term. Americans have to unequivocally reject Trumpism and all that it stands for.  There needs to be a cleansing, a catharsis.  Americans must want to restore decency and show the world they have not abandoned their moral compass.  If Donald Trump wins re-election, it will be a disaster for the United States and for the world.  Humanity can not afford another four years of Trumpism.

During the 1920 U.S. presidential election campaign, Republican candidate Warren G. Harding of Ohio used the slogan "Return to normalcy," meaning a return to the way of life before World War I.  Many Americans are sick and tired of the hate and anti-immigrant rhetoric spewing from the president and his supporters.  They want a return to civility and respect.  They are tired of seeing Donald Trump trample overs the values that have always been near and dear to them.  They roll their eyes when they hear their leader heap praise or cozy up to murderous dictators and authoritarian strongmen such as North Korea's Kim Jong-un, Russia's Vladimir Putin and Saudi Crown Prince Mohammed bin Salman.  They cringe with sadness and horror when they see innocent migrant children separated from their parents and held in detention camps.

Many Americans are tired of school shootings and mass murders, while their president gives his undying support to the National Rifle Association.  They are tired of Donald Trump's constant lying or misrepresentation of the truth.  They are fed up with his ugly tweets, his bullying tactics and his childish schoolyard name calling.  They feel that he doesn't treat Congress as a co-equal branch of government along with the Executive Branch. They are disgusted by the White House's interference with congressional oversight and its stonewalling of Congress's attempts to shed light on the findings of Special Investigator Robert Mueller's two-year investigation into Russian interference in the 2016 U.S. election.  Key Mueller witnesses such as Don McGhan were ordered not to testify.

Unfortunately, Attorney General William Barr has misrepresented Robert Mueller's report.  A large number Americans have not read the Muller Report.  They only listen to conservative media and they believe that Trump has been fully exonerated.  They are sadly misinformed.  In his surprise May 29th press conference, Muller clearly stated that  "if we had confidence that Trump did not commit a crime, we would have said so."  Muller also stated that there was "no hoax" and "no coup" found in his investigation.  Several instances of obstruction of justice by President Trump are cited in Mueller's report.  The only reason why Mueller did not indict Trump is that he did not believe that he had the green light to indict a sitting president.

If Donald Trump is truly innocent of wrongdoing, as he claims, then what does he have to hide?  Why is he scrambling to cover up the truth?  Why is he continually attempting to prevent his tax returns from being released.  These are definitely not the actions of an innocent man.

May I respectfully suggest a slogan for the 2020 Democratic Party nominee.  How about, "Return to decency?"  If the U.S. returns to decency, then Americans can concentrate on what really matters, such as heath insurance for the uninsured, fighting climate change, reducing poverty, increasing  wages for working people, establishing sensible gun control laws and background checks, making college education more affordable . . .

Donald Trump has been President of the United States since January 20, 2017.  He has done much damage during his time in office and it's going to take some time for America to heal once he leaves the White House.  Let the healing begin, sooner rather than later.  It's time for America to live again, to let the light in, to creep out of the darkness of nationalism and isolationism. It's time for Americans to build bridges, not walls, to be the best it can be.  It's also time for the United States to have a president who is not beholden to a foreign government as Trump is to Russia, one who does not say he'd accept foreign information on his Democratic opponents, as Trump told ABC's George Stephanopoulos.

I wish Donald Trump no personal ill will.  I only wish that he be held accountable for his actions and that his days in the Oval Office come to an end as soon as possible.  I hope that he becomes the second U.S. president to resign or that he experiences electoral defeat in 2020.