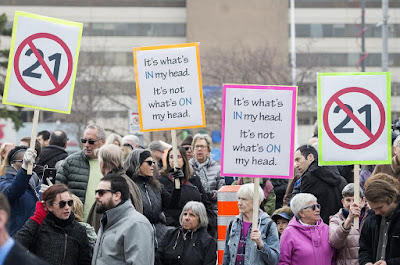 Shame on the Coalition Avenir Québec (CAQ} government of Quebec and its leader, Premier François Legault!  How ironic that while people all over Canada (of all ages, races and religions) were celebrating the Toronto Raptos' NBA championship, the province of Quebec passed Bill 21, banning religious symbols for state workers.  The secularism law prohibits public school teachers, government lawyers and police officers from wearing religious symbols while on the job.

I won't mince words.  This legislation is short-sighted and disgraceful.  It is an utter travesty and has no place in a country that seeks to be open and inclusive and diverse, like Raptor fans.  It is a an attack on freedom of religion.  It reeks of Trumpism and racism.  Such a law may be welcomed by Donald Trump and his supporters, but it should be anathema anywhere in this country.

Bill 21 uses the cause of public secularism as an excuse to cover the Quebec government's underlying xenophobia, its anti-immigrant policy and its racism.  It does not represent Canadian values. Instead, it represents the ethos of the staunchest Quebec nationalists, the"pure laine" advocates (both overt and covert).  Religious symbols are worn by "them," not "us."  This is a law based on bigotry and fear mongering.

There is no reason to fear any kind of religious domination or destruction of the secular state in Quebec.  The days of strong Catholic control of the province are long gone, never to return.  The large crucifix in Quebec's legislature, although a target for ultra nationalists. is rife with historical meaning and purpose.  The history of New France and Quebec cannot be changed and it is dangerous and foolhardy to pretend that the past did not exist.

Bill 22 is not who we are.  It is not worthy of Canada and it is not worthy of Quebec. Immigrants come to this country because they don't want to be told what they can or can't wear on their heads.  Fortunately, the National Council of Canadian Muslims and the Canadian Civil Liberties Association are launching a court challenge to the legislation.  People of faith in Quebec should not have to choose between their religious beliefs and their jobs.  Many work in the public sector.  Many are health care workers and educators.

Late Sunday night (June 16, 2019), the CAQ government of Quebec passed Bill 21.  After a weekend marathon session in the National Assembly, the legislation passed by a 73-35 vote, with the support of the Parti Québécois.  Once the bill passed, the CAQ introduced several amendments to ensure that the law is being enforced and it impose disciplinary action if it is not.  This, of course, raised the spectre of "secularism police."  What a dark day for Quebec and for Canada!

As The Globe and Mail pointed out editorially, "But what has Mr. Legault really accomplished by making Quebec the first subnational government in North America to ban Muslim headscarves and collateral religious symbols."  If I sound upset, you bet I am!  This is a blatant assault on freedom in my country!  It is my hope that Prime Minister Justin Trudeau comes out swinging against this abhorrent legislation.  Oh, by the way, Raptors "Superfan," Nav Bhatia, led the victory parade, wearing a turban.

EDITOR'S UPDATE (July 26, 2019): The following headline appeared above a story on the CBC's website yesterday:

According to the story, a white man "accosted an Arabic speaking woman and her two-year old daughter earlier this week, uttering racial slurs and sexually violent threats in broad daylight on a Montreal street."

The story went on to say that the incident, captured on video and widely circulated online, has added to increasing fears that Quebec's new religious symbols law "has provided licence for the public expression of hatred."
Posted by Joanne at 6:34 PM