An Open Letter to the Toronto Blue Jays: Vladdy should have played yesterday 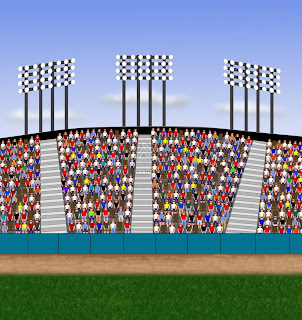 To Mark Shapiro and Ross Atkins:

Yesterday I attended a matinee game between the Toronto Blue Jays and the Boston Red Sox.  It was the Victoria Day holiday and I was looking forward to watching my favourite team play at the Rogers Centre.  I was also waiting to see Vladimir Guerrero Jr. work his magic at the plate.  In March of 2018, I was at Montreal's Olympic Stadium when Vladdy hit a walk-off home run to win an exhibition game against the St. Louis Cardinals.  This time I wanted to see him play in an official major league game.

To my disappointment, Vladdy Jr. was not in the line-up.  Why?  Apparently, the 20-year-old slugger was being rested.  There was some talk that Vladdy might pinch hit, but that didn't happen because the game was an absolute blowout.  So, I will have to wait for another day to see him at the dome.  Some fans, however, will be so turned off by the Victoria Day fiasco that they won't buy another ticket this season. The Blue Jays were so overmatched  by the Boston Red Sox that it was embarrassing.  Just compare their batting averages to those of the Jays.


It's no secret that the Jays are rebuilding.  We all know that they won't be contending this year.  It's also true that many of the Jays' starting pitchers are suffering from injuries.  However, that doesn't excuse what happened on the field yesterday.  That holiday crowd deserved better.  They deserved to see Vladdy Jr.  After all, they paid their hard-earned money and were rewarded with an inferior product.

The game turned out to be such a one-sided affair that it was painful to watch at times. The Red Sox pounded our Blue Jays by a score of 12-2.  The crowd of some 26,000 people was very quiet.  There was little enthusiasm or energy in the stadium.  I noticed that many people didn't even bother to stand up for the seventh-inning stretch.

Given the nature of the game, it's not surprising that the atmosphere was library-like.  Other than catcher Luke Maile's two-run homer in the second inning, there wasn't much to cheer about.  The Jays did not record a single hit after that.  As I sat in the stands and followed the game on the radio, I heard the broadcasters announce that Vladdy Jr. had been named American League player of the week, the youngest player in Blue Jays history to receive the honour.  I felt royally ripped-off that I did not see him play yesterday afternoon - and I wasn't the only disappointed spectator.

I am not a fair-weather fan. I have followed my team through thick and thin - and there have been many lean years.  Since their two World Series victories in 1992 and 1993, the Jays have only participated  in postseason play twice.  They have only made the playoffs two two times in over 25 years.  I believe that the holiday crowd was shortchanged.  I also believe that the Blue Jays only hurt themselves by their bonehead decision to sit Vladdy out on a holiday.  If he had to be rested, it should have been scheduled for another day.  The Jays should have showcased Junior in front of that Victoria Day crowd.  How do they expect to fill the stands, when they treat their customers that way?

The Blue Jays should admit their mistake and apologize to their fans for their regrettable decision to sit Vladdy out.  They are in the entertainment business and there is no excuse for not giving their customers value for their money.  An appearance by Vladdy wouldn't have won the game for the home team, but it sure would have made losing more palatable.  It would have brightened up the atmosphere.

For the record, I will always advocate of behalf of the fans.  We fans are the lifeblood of a sports franchise. We don't get paid millions of dollars and we don't have agents. Yet, without our support, sports franchises would not survive.  Once a year, teams play lip service to us with a fan appreciation day.  Yes, there are promotions, but the promotions bring in advertising dollars.  So, today I will stand up for the fans unequivocally.