You're wrong, Donald Trump. White nationalism IS a threat and you are helping to make it more so. 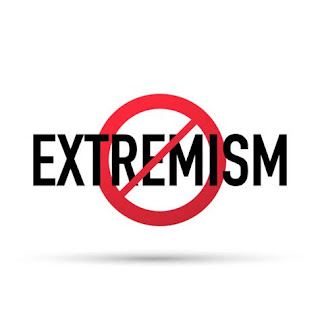 The brutal massacre of 50 innocent people in Christchurch. New Zealand was absolutely horrific.  Words are not strong enough to describe an atrocity of this magnitude .  Acts of such violent extremism, whether political, religious or racial, are a scourge.  They are particularly vile when they occur in a houses of worship, whether they be Christian churches, Jewish synagogues, Islamic mosques or other sacred places.  This kind of inhumanity should be condemned unequivocally, whether left wing or right wing in nature.

Although U.S. President Donald Trump expressed sympathy for the New Zealand victims, he failed to express  concern about  the rise in white nationalism around the around the world.   Instead, he said, "I don't really. I think it's a small group of people that have very, very serious problems, I guess.  If you look at New Zealand, perhaps that's the case.  I don't know enough about it yet.  But it's certainly a terrible thing."

It's obvious that Trump doesn't realize (or doesn't want to realize) the gravity of the situation.  Perhaps he is afraid of alienating his base, many of whom are white nationalists.  He continues to deny that he is a racist.  The facts, however, tell a different story.

While he was still a private citizen, Donald Trump was very outspoken in leading the so-called "birther" movement.  He questioned whether Barack Obama, the first Afro-American U.S. president, was actually born in the United States (Obama was born in Hawaii in 1961).  Trump claimed that Obama's birth certificate may not have been authentic.  The implication was that Obama, whose father was a Muslim from Kenya, was a foreigner and not a true American.  Trump eventually had to admit that Obama was "born in the United States PERIOD."

Trump's presidential victory corresponded with a growth in readership on white supremacist internet sites and hate comments occurred on message boards.  In 2017, a report form the Southern Poverty Law Center, found there were more than 600 groups that believe in some form of white supremacist ideology.  Neo- Nazism showed the most growth, increasing from 99 to 121 groups over the past year.

The New York-based Anti-Defamation League reported that domestic extremists killed at least 50 people in the United States in 2018, an increase from 37 in 2017.  It stated that white supremacists "were responsible for the great majority of the killings, which is typically the case.”  Earlier his month, the FBI released

A former white nationalist told CNN's Chris Cuomo about the rise in hate and how it spreads online.  Christian Picciolini, now an author and public speaker, told Cuomo that the internet is a serious problem because "what's happening on the internet is essentially a 24-hour hate buffet" where people can "feast all night long" on this stuff.

Soon after the 2016 election, Richard Spencer, president of the National Policy Institute, a white supremacist think tank, and his fellow white nationalists expressed their support of Donald Trump.
Trump's hard line stance on immigration, his anti-Mexican rhetoric and his Muslim ban have only served to encourage and embolden right-wing  racists.  Trump may have publicly denounced bigotry, as his supporters are quick to point out, but white nationalists appear to be receiving another message from him.  They seem to believe that they have his tacit support of the President of the United States, one of the most powerful and influential persons on the planet. When Donald Trump declares, "Let's make America great again, white supremacists, perceive it to be a clarion call to make America white again.

Sadly, white nationalist violence is spreading around the world.  My country, Canada, has not been immune to it.  On January 29, 2017, a gunman entered a mosque in the St. Foy neighbourhood of Quebec City..  He killed six worhippers and injured 19 others shortly after the end of evening prayers.  On February 8, 2019, the perpetrator was sentenced to life in prison with no possibility of parole for 40 years.  People who knew him claimed he had far-right, white nationalist and anti-Muslim views.  He often disparaged refugees and feminists online.

On August 12, 2017, white supremacists held a "Unite the Right" rally in Charlottesville, Virginia.  It was a chilling display of anti-Semitism. as a group of white men, carrying torches marched through the town shouting, "Jews will not replace us."  Some carried Nazi flags.  It ended in death when a car was driven into a crowd of people who were peacefully protesting against the racists.  Heather Heyer, a 32-year-old Charlottesville woman, was killed in the attack.  Donald Trump later held a new conference in which he stated that "both sides were to blame" and that there were "fine people" among the original protesters.  White nationalists, of course, interpreted his remarks as his approval of them.  They felt vindicated.

David Duke, a white supremacist and former Grand Wizard of the Knights of the Ku Klux Klan, attended the Charlottesville rally and proclaimed that white nationalists like him voted for Trump because "he's going to take our country back."  It should be noted that Trump did not immediately reject Duke's support during the 2016 election campaign.

On October 26 2018, a man was arrested in Florida for mailing explosives to Democratic Party officials and several media personalities who had been criticized by Donald Trump.  The man was a Trump supporter and his white van was festooned with Trump propaganda.  The president declared that he had been "insane" long before he had become a Trump fan.

On October 27, 2018, a mass shooting occurred at the Tree of Life synagogue in Pittsburgh, Pennsylvania.  11 people were murdered and seven were injured.  It was the deadliest attack on the Jewish community in American history.  Using an online social network, the suspect had earlier posted anti-Semitic remarks against the Hebrew Immigrant Aid Society (HIAS), which is supported by Tree of Life.  In reference to the Central American migrants and immigrants, whom Trump rails against, he wrote that "HAIS likes to bring invaders that kill our people.  I can't sit by and see my people slaughtered."

Just last month, a U.S. coast guard lieutenant, stationed in Washington, D.C., was arrested on suspicion of domestic terrorism.  The suspect, a 49-year-old from Silver Springs, Maryland, is accused of stockpiling weapons and drugs.  He had an apparent hit list of Democrats and MSNBC and CNN anchors, including Nancy Pelosi, Joe Scarborough and Kamala Harris., the very people Donald Trump demonizes.  Prosecutors say he is a white supremacist who holds extremist views.  According to court documents filed on February 19, 2019, the defendant "is a domestic terrorist bent on committing acts dangerous to human life that are intended to affect government conduct."

On March 9, 2019, The Washington Post reported that according to internal FBI data, more domestic terror suspects were arrested in 2918 than those allegedly motivated by international terrorist groups.

On March 15, 2019, a 28-year-old Australian carried an attack at two mosques in Christchurch, New Zealand, targeting Muslims at Friday prayer.  50 people were killed and some 50 were injured.  The accused gunman left a lengthy manifesto behind in which he described himself as a white nationalist who hated immigrants and was sparked by attacks in Europe that were perpetrated by Muslims.  He also wrote that he supported Donald Trump as "a symbol of renewed white identity and common purpose" but not as a "policy maker and leader."

On March 16, 2019 in Cleveland, Ohio, a vigil for victims of the New Zealand mosque attacks was interrupted by a Trump supporter with an enormous "Build the Wall" parade float.  Newsweek reported that according to local news outlets, "the float was rolling through the memorial service while blasting music, including "God Bless America."  The Trump supporter, a tourist from Michigan, told a Cleveland news channel that he had been visiting the Rock and Roll Hall of Fame when he noticed the memorial service, which was taking place near City Hall.  The vigil was organized by the Islamic Center of Cleveland and Global Cleveland for the purpose supporting and paying tribute to New Zealand's dead and injured.  Its aim was also to combat hate speech and polarization.

The White House has vehemently denied any link between Trump and the man accused of the New Zealand shootings.  Mecedes Schlapp, its director of strategic communication, made the following statement:  "It's outrageous to even make that connection between this deranged individual that committed this evil crime to the president who has repeatedly condemned bigotry, racism and made it very clear that this is a terrorist attack.  Mercedes told reporters that "We are here to support and stand with the people of New Zealand,"  She said that Trump had telephoned Prime Minister Jacinda Ardern to offer his condolences, prayers and any help the U.S. might be able to provide.  Ardern's message was "to offer sympathy and love to all Muslim communities."

This past weekend, at least 30 gravestones at a Jewish cemetery in Fall River, Massachusetts were defaced with swastikas and anti-Semitic messages.  The Fall River Police Department told Newsweek that the gravestones at Hebrew Cemetery had been vandalized.  The hate messages were written in black marker and among the graffiti was "This is MAGA Country," referring to Donald Trump's "Make America Great Again" slogan.

Condolences and prayers are well and good, but much more is needed from this U.S. president.  For a start, he could turn down his rhetoric.  New Zealand's Jacinda Adren, in her handling of her country's tragedy, was everything Trump is not.  She was unifying.  She was firm, decisive and empathetic and she refused to name the accused.  She also made sure that assault rifles were banned in her country.  Now that's leadership!