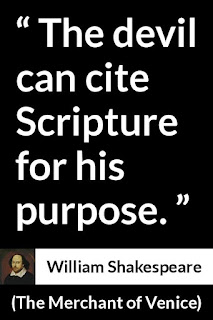 "The devil can cite Scripture for his purpose!"

- William Shakespeare
From The Merchant of Venice, Act 1, Scene 3


U.S. Attorney General Jeff Sessions has quoted from the Bible in defence of President Donald Trump's immigration policy.  In so doing, Sessions has cited Scripture for an evil purpose. He has used a Biblical verse to justify the inhumane practice of separating the children of undocumented immigrants from their parents.at the southern border of the United States.

The passage that Sessions quoted is from St. Paul's Epistle to the Romans 13:1, which reads as follows:

Let everyone be subject to the governing authorities, for there is no authority except that which God has established. The authorities that exist have been established by God.

Here is what the Attorney General has said to justify the United States Justice Department's policy of prosecuting migrants who cross the border from Mexico.  During a speech to law enforcement officers in Fort Wayne, Indiana, Sessions declared, ""I would cite you the Apostle Paul and his clear and wise command in Romans 13, to obey the laws of the government because God has ordained the government for his purposes."

That passage from Romans 13 has been used to defend the most execrable and immoral practices.  Sessions, who is a Southerner from Alabama, knows that it has been quoted to justify slavery and the treatment of human beings as property.  The Nazis in Germany used it give religious authority to genocide.  In South Africa, it was used to grant legitimacy to apartheid.  St. Paul would be appalled to know that his words have been used to condone actions that cause human suffering.  Paul himself spent time in prison because he did not always obey the rules of unjust governors.

What Jeff Sessions has suggested is that God supports the Trump administration's reprehensible policy of tearing children away from their parents.  He has advocated that laws should be blindly obeyed, even unjust laws.  Sessions should read Henry David Thoreau's essay, Civil Disobedience.

"The government itself, which is the only mode which people have to execute their will, is equally liable to be abused and perverted, before people can act through it."

"Under a government which imprisons anyone unjustly, the true place for a just man is also in prison."

In 1963, civil rights leader, Martin Luther King, Jr. went to prison because he protested the segregation laws in Alabama, defying a judge who ruled that Dr. King could not hold protests in the city of Birmingham.  In his Letter from a Birmingham Jail, King explained why he had broken the law.  "I am here because injustice is here, King wrote.  "I would agree with St. Augustine that an unjust law is no law at all."

According to a 2016 profile in Newsweek magazine, Sessions is a Sunday school teacher at the Ashland Place United Methodist Church in Mobile, Alabama..  He has also been a delegate to the annual Alabama Methodist Conference.  Is it any wonder that Southern Baptist leader Russell Moore told CNN's Wolf Blitzer that AG Sessions "could use more time in Sunday school?"  Moore, who is responsible for lobbying the government for Southern Baptist interests, declared, "We all have moments when we could use a little more time in Sunday school and this is one of those moments for the Department of Justice."


Sessions reminds me of the Pharisees, a Jewish sect at the time of Christ.  They followed the letter of the law, but ignored the spirit of the law.  They were more concerned about appearances than actions.  They were more interested in upholding the law than acting compassionately.  That is why they criticized Christ for healing the sick on the Sabbath.  Christ, however, called them out for their hypocrisy.

Instead of focusing on a singular Biblical quote, Sessions should instead focus on the basic tenets of Christianity such as "love your neighbour as yourself."  He should also reread the parable of the "Good Samaritan" and write a 500-word essay on it.  Let me be clear.  I am not advocating that laws should be completely disrespected and ignored, only that they should not be obeyed blindly and unquestioningly.

In a just society, compassion should always overrule the letter of the law.  How dare the Attorney General of the United States hide behind the Bible to justify the cruel and immoral treatment of innocent babes in arms!  How dare President Donald Trump blame the Democrats for this egregious policy!  He has the power to stop it with the stroke of a pen.  Instead he refuses, using the children as a bargaining chip to obtain the funding for his insufferable wall along the Mexican border.  What kind of of president does that? What kind of a man does that?

This should not be a partisan issue.  It is a moral issue.  That's why all five living First Ladies of the United States, including Donald Trump's own wife, Melania, have spoken out against the so-called "zero tolerance" family separation policy.  It appears however, that their opposition has fallen on deaf ears.

The Trump administration has brought shame and disgrace upon a great nation.  It is time to stand up to the horror that it has wrought.  Children need the security of being with their parents.  Pediatric experts agree that without that security, they will suffer irreversible psychological damage.  That is an outrage!  It's time to take a stand.  People in the United States and around the world should protest and speak out against Trump's immigration policy.  Thankfully, Americans have the chance to express their opposition with their vote on November 6, 2018.

EDITOR'S UPDATE (June 20, 2018): Under increasing pressure from the public (and reportedly from his wife Melania and daughter Invanka), President Trump has announced his intention to back down on his policy of separating children from their parents.  It's good that Trump has changed course, albeit rather reluctantly.  He has blamed the Democrats for the immigration debacle, saying that they were the reason for the separation of families.  Yet, he now says he intends to sign an executive order backing down on his administration's unconscionable treatment of migrant children.    It turns out he can put a stop to it with the stroke of a pen.

What about the 2,300 children who are already separated from their parents?  Their fate is unclear and they remain locked up.  The executive order does not excuse what Trump has done and does not undo the harm to the children that have already been detained.
Posted by Joanne at 12:00 PM