Roy Halladay: My Tribute to the Doc 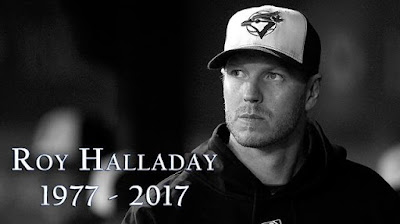 "By all accounts, the baseball world lost not only a star and a great competitor but also an even greater man, one who had earned virtually universal respect within the industry and among fans.  His immense talent may have been matched only by his tireless work ethic and his humility."

Roy Halladay's premature death came as a shock to baseball fans, especially those in the two cities where he made his mark - Toronto and Philadelphia.  On Tuesday, November 7, 2017, Roy lost his life when his single-engine plane crashed into the Gulf of Mexico, off the coast of Florida.  He was 40 years old, much too young to die, especially for a man with such a zest for life.

Halladay was the Toronto Blue Jays' first-round selection in the 1995 major league draft. In total, Roy spent 16 season in Major League Baseball, 12 of them in Toronto, the remainder in Philly.  He was an eight-time All-Star and two-time Cy Young Award winner (22 wins in 2003 for the Blue Jays and 21 wins in 2010 for the Phillies). The lanky right-hander from Colorado left the game with some impressive career statistics. He had a win-loss record of 203-105, an ERA of 3.38 and 2,117 strikeouts.  Halladay was durable and resilient.  He had the strength and determination to go deep into games.  At the time of his retirement in 2013, he was the major league leader in complete games.among active pitchers with 67.  He had also racked up 20 career shutouts.

Roy's nickname "Doc" (after Wild West gunslinger Doc Holliday) was bestowed upon him by the late Tom Cheek, longtime radio voice of the Toronto Blue Jays.  He endeared himself to Torontonians because of his philanthropy.  He gave back to the community.  During his time with the Jays, Roy and his wife Brandy invited children from Toronto's Hospital for Sick Children and their families to watch games in  "Doc's Box" at the Rogers Centre.  Halladay also had a stipulation in his contract by which he donated $100,000 each year to the Jays Care Foundation.and he was nominated several times for the Roberto Clemente Award for his support for underprivileged children.

When Roy left the Blue Jays after the 2009 season, Toronto fans were disappointed and saddened.  At the same time, they understood why he had to go.  It was best for Doc.  He wanted an opportunity to compete in the playoffs and the World Series before his career ended.  He didn't think that was going to happen in Toronto.  So, he went to Philadelphia, where he fulfilled his dream of playing in the postseason.  He simply wanted a chance to play on a World Series-winning team.

In December of 2009, the Phillies acquired the Blue Jays' ace in a trade for minor league prospects Travis d'Arnaud, Kyle Drabek and Michael Taylor.  For Roy, the 2010 season in the City of Brotherly Love was unforgettable.  It was simply magical.  On May 29, 2010, he pitched a perfect game for the Philadelphia Phillies, defeating the Florida Marlins by a score of 1-0.  It was the 20th perfect game in Major League Baseball history.  Halladay followed that up by throwing a no-hitter in his very first postseason start, on October 6, 2010.  It was only the second no-hitter in Major League Baseball history (Don Larsen threw a perfect game for the New York Yankees in the 1956 World Series).  Halladay's postseason no-hitter made him the fifth pitcher in major league history to throw two no-hitters in one season.  It came at the expense of the Cincinnati Reds in the National League Divisional Championship).

Although the Phillies did not advance to the 2010 World Series, Roy's 21 regular season victories and his perfect game earned him his second Cy Young Award.  He joined the exclusive group of only six pitchers in MLB history to win the Cy Young in both the American and National Leagues.  It is a group that includes such luminaries as Roger Clemens, Randy Johnson, Pedro Martinez and Gaylord Perry.

During the 2012 season, Roy reached another milestone in his illustrious career.  He became the 67th MLB pitcher to record 2000 strikeouts.  During  2013 season, however, Halladay was plagued with shoulder problems and had a 6.82 earned-run average in 13 starts with the Phillies.  His fastball averaged only 88 miles per hour.  Realizing that he was no longer capable of playing at his former level of excellence, Roy decided it was time to retire and spend more time with his family.  He explained his decision with these words: "There's a lot of travel and a lot of time away from family and loved ones.  I felt this is a great time for me to get back involved and help my kids. They're starting to strive for their dreams and that's something I want to be part of, so I'm looking forward to that."


In December of 2013, Halladay signed a one-day, free-agent contract so that he could retire as a Blue Jay.  In doing so, Roy demonstrated the high regard he held for the city of Toronto and the Blue Jays organization.  At the time, he stated, "I was very lucky to have a lot of people in the (Blue Jays) organization really develop and help me become the player I was able to become."

By no means did Roy intend to slight the city of Philadelphia or the Phillies organization.  In fact, he he said, "I want the Phillies organization to know how much I enjoyed my time there.  How much they meant to my family and what a major part of my career they were."  It was just that Toronto had given him his start and had stuck with him when he struggled during the early days of his career.

Last June, I attended the Canadian Baseball Hall of Fame induction ceremonies in St. Mary's Ontario.  Roy was one of the inductees, along with Montreal Expos great Vladimir Guerrero, Baseball Canada president Ray Carter legendary umpire, Doug Hudlin and the 2015 gold-medal winning Pan Am Canadian Baseball team.  Although I didn't get an opportunity to speak to Roy, I was delighted to see him there.

I am so thankful hat Roy Halladay played in Toronto for a dozen years.  My only regret is that he was unable to play on a winning team here and it's unfortunate that he failed to secure a World Series ring in Philadelphia.  However, he deserves to be voted into the Hall of Fame at Cooperstown when he is scheduled to appear on the 2019 ballot.  I admit I'm biased, but I hope Halladay is inducted as a Toronto Blue Jay.

Apart from Roy's excellence as a ball player, he was a wonderful human being and an exemplary family man,  He was completely devoted to Brandy and his two sons, Braden and Ryan.  He wasn't loud-mouthed, crass or boastful.  He was the kind of athlete you would want your children to emulate. 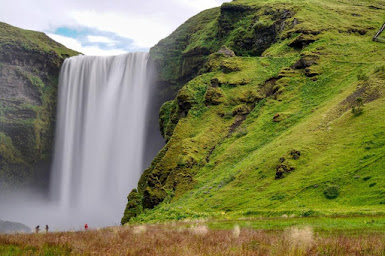