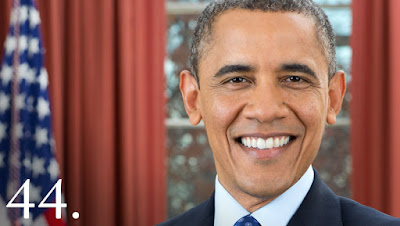 Rather than protect wasteful tax loopholes for the few at the top, we should be investing more in things like education and job creation and job training that we know grow the economy for everybody.  And rather than lock in tax breaks for millionaires, or make it harder to actually enforce existing laws, let’s give tax breaks to help working families pay for child care or for college. And let’s stop rewarding companies that are shipping jobs overseas and profit overseas, and start rewarding companies that create jobs right here.


As Barack Obama nears the end of his presidency, the 44th President of the United States must be reflecting on his legacy. He's had a rough time in office due to the machinations of conservative Republicans and Tea Party supporters. Will history treat him more kindly?  I certainly hope so.

Let me be clear.  I am not an apologist for President Obama or any politician.  I'm not saying that Obama's a 21st century Abraham Lincoln.  I'm merely arguing that he has been underappreciated and underrated.

From the beginning of his first term in office, Republicans and Fox News tried to discredit him.  They endeavoured to portray him as an outsider, a foreigner and "not one of us."  The so-called "birthers," including Donald Trump, claimed that he wasn't really born in Hawaii and that he was probably born in Kenya or Indonesia.  His middle name is "Hussein," so they implied that he had sympathy for Islamic extremism.  What utter nonsense!  What claptrap!  Unfortunately, too many Americans were hoodwinked.  According to polls, they actually believed this to be true.

Soon after his inauguration, President Obama had to deal with the worst economic crisis since the Great Depression.  His steady hand and his investment in infrastructure helped the United States through a crisis that wouldn't have happened if there had been more regulations on American financial institutions.

In addition, Obama inherited the fallout from George W. Bush's ill-advised and ill-fated invasion of Iraq.  According to a 2013 report by scholars from the "Costs of War" project at Brown University's Watson Institute for International Studies, more than 190,000 people had been killed in the decade since the invasion began in 2003.  The war will cost the United States $2;2 trillion, including the funds needed to provide for veterans until 2053.

Every step of the way, the Republican-controlled Congress has tried to impede Obama's attempts at progress.  For example, the President supports more stringent gun-control legislation.  He is sickened by the preponderance of gun violence in the United States, particularly after the tragic shootings at Sandy Hook Elementary School in Connecticut.  In fact, he told the BBC that his failure to pass "common sense gun safety laws" in the United States "even in the face of mass killings" is the biggest frustration of his presidency.

Here's what President Obama has accomplished:

* The current U.S. unemployment rate (April 2016) is 5 per cent.  When Obama took office in January of 2009, it was 7.8 per cent.  In 2008, the last year of George W. Bush's presidency, the jobless rate jumped from 5 percent to 7.3 percent.  In October of 2009, during the economic downturn caused by the Great Recession, the unemployment rate rose to 10 per cent, the highest level of Barack  It decreased steadily from then on.

Here is a chart, provided by the U.S, Bureau of Labor, showing the U.S. unemployment rate from 2006 to the present.

* In his recent statement on the economy, Obama called on the Republican-controlled Congress to close corporate tax loopholes such as "inversions," a kind of merger in which an American company purchases a foreign counterpart and then relocates to that county in order to reduce its taxes.

* He has taken action on climate change while right-wing Republicans refuse to accept the severity of the situation.  Despite reliable scientific evidence to the contrary, they deny that it is a problem or they hide their heads in the sand.

* He has restored diplomatic relations with Iran and removed many economic sanctions against the country in exchange for the limiting of Iran's nuclear program.  This may not be a perfect deal, but it's certainly preferable to tension between the two nations and uncertainty about Iran's nuclear intentions.  Not surprisingly, Donald Trump, the Republican Party's presumptive nominee for president, has been vocal in his criticism of the deal and has stated that he would revamp it.

During his final year in office, Obama has seemed more relaxed.  He doesn't have to be concerned with being re-elected, so he has a freer reign to do accomplish what he wants.  He can really be himself and fight for what he believes.  It's unfortunate, though, that during he two terms in office, race relations do not seem to have improved in America.  As the first African-American U.S, president, Obama has had a historic opportunity to make significant progress in that area.  It seems to me that he just hasn't been particularly successful in soothing strains between blacks and whites.

On Friday, May 27, 2016, Barack Obama will make a historic visit to Hiroshima, Japan, where the first atom bomb was dropped by the United States on August 6, 1945.  He will become the first sitting U.S. president to tour the site of the world's first nuclear bombing, where he will be accompanied by Japanese Prime Minister Shinzo Abe.

This is a bold move on the part of the President and the prospect of Obama travelling to Hiroshima has stirred up controversy. He will, however, stop short of apologizing for American actions in 1945. He told Reuters news agency that the main purpose of the visit is to "reflect on the nature of war" and the suffering it causes.  He said it's "a happy story about how former adversaries came together to become one of the closest partnerships and closest allies in the world."