Soeur Sourire: The Saga of the Singing Nun 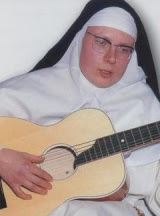 Back in the 1960s, around the time of John F. Kennedy's assassination, a nun from Belgium gained international fame with a hit song.  Her birth name was Jeanne-Paule Marie Deckers and she was born in Brussels almost 79 years ago, on October 17, 1933. You may remember her as The Singing Nun.

Jeanine's parents, Lucien and Gabrielle Deckers, encouraged their daughter to take over the family bakery in Brussels.  She had other ideas and briefly enrolled in a Paris art school.  She later attended the Catholic University of Louvin and became a high school art teacher.  While in her 20s, she studied art, played guitar and became distraught over a broken engagement.  In 1959, at the age of 25, she entered the Dominican Fichermont Convent in Waterloo, Belgium, taking the name Sister Luc Gabriel (a combination of her parents' first names).  At the convent, the talented nun wrote, sang and performed her own songs.  Her music was so popular with the other members of the order and at retreats that she was encouraged to record an album.that visitors to the monastery would be able to purchase.

The nuns approached the Philips Record Company's office in Brussels about recording some of Sister Luc Gabriel's songs.  Philips was so impressed with her record that they signed Sister Luc Gabriel to a contract.  It was agreed, however, that all royalties from her recordings would be donated to her order as she had taken a vow of poverty. Her album became so popular in Europe that Philips began importing the disc to North America.  It was released in the United States as The Singling Nun.  A single from the album, "Dominique,"  became an international hit.  Sister Luc Gabriel had written the song as a tribute to Saint Dominic, he 13th -Century saint who founded her order.  It was recorded to raise funds for a church mission in Africa.

Suddenly and unexpectedly, the obscure Dominican nun attained celebrity status.  This shy, bespectacled woman became the unlikeliest of pop stars.  She found herself in the midst of a whirlwind of fame that changed her life irrevocably.  She used the stage name Soeur Sourire (Sister Smile), a  moniker devised by Philips, and she also performed concerts . . . reluctantly.  By late 1963, both her album and her single had risen to the top of the charts in the United States..

After the death of President Kennedy on November 22, 1963, grieving Americans were ready for a softer, more soothing sound.  "Dominique" filled the bill.  It is the first Belgian song to become a number one hit single in the United States.  It held the Billboard top spot in  the U.S. for four weeks beginning on December 7, 1963, holding back The Kingsmen's "Louie Louie" from reaching Number 1.  Versions of "Dominique" were recorded in Dutch, German, Hebrew and Japanese and the song was charted in many different countries.

On January 5, 1964, The Singing Nun reached the pinnacle of her fame when she appeared, via tape, on the Ed Sullivan Show.  She performed a brief rendition of Dominique and was interviewed by Ed Sullivan,  At the conclusion of the interview, Sullivan commented that the nation "feels so much closer to nuns now."  In 1964, The Singing Nun put forth her second album, Her Joy, Her Songs.  The album did not receive much attention and was quickly forgotten.

Sudden fame had been difficult for the unassuming nun to handle.  In 1965, she returned to the protective confines of her convent.  In 1966, an MGM musical called The Singing Nun was released.  It was very loosely based on the life of Jeanine Deckers, although she was referred to as Sister Ann.in the film.  The Singing Nun starred Debbie Reynolds in the title role and featured Ricardo Monalban, Greer Garson, Katherine Ross, Chad Everett and Agnes Moorehead.  Ed Sullivan portrayed himself.  The film was dismissed by Deckers who described it as "fiction."  It was, however, nominated for an Academy Award in the category of Best Music, Scoring of Music, Adaptation or Treatment.

In 1967, Deckers left her convent before taking final vows.  She had decided to pursue her  music career on a full-time basis.  This time she performed under the name "Luc Dominque" as Philips Records owned the rights to her original stage name, Soeur Sourire.  That same year, she released another album, I Am Not a Star in Heaven.  The album's title track included the following lyric: Sister Smile is dead, God is the only star . . .  Deckers' disdain for the spotlight was made abundantly clear.  Perhaps that is one reason why he album did not sell well.  It was a commercial failure.

Although deeply religious, Deckers became increasingly critical of some Catholic doctrines, particularly the Church's teachings on birth control.  In fact, she strongly advocated the use of artificial contraception.  Her album I am Not a Star in Heaven contained a song called "La Pilule D'Or."  It's English title is "Glory Be to God for the Golden Pill." and it is a song about how God sent The Pill to women. 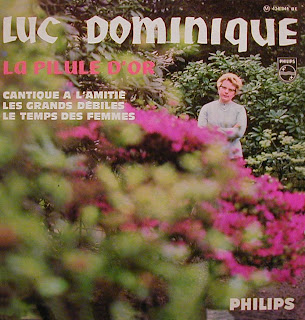 Jeanine Deckers was never able to duplicate the success of "Dominque," and was destined to become a one-hit-wonder. With her singing career going nowhere, Deckers opened a school for autistic children in Belgium with her companion, Anne Pecher.  Anne (also known as Annie) was the author of a book on psychomotor therapy with regard to autistic children.  Published in 1977, Individual Experiences in Psychomotor Therapy deals with a therapy that involves the relationship between conscious metal activity and physical movement.  Although Pecher did not invent psychomotor therapy, she used it in the treatment of autism.

Jeanine Deckers and Annie Pecher were plagued by financial difficulties.  In the late 1970s, the government of Belgium claimed that Deckers owed a large sum of money in back taxes (about $63,000 U.S.).  Deckers argued that she was liable for payment of the taxes because the royalties from her recording were donated to the convent and her religious order.  She lacked proof,  however, because she had neglected to ask the convent for receipts.

In 1982, Deckers lost her final court  case with Belgian authorities.  Facing the financial pressure of rising legal fees, she became so desperate that she attempted to revive her singing career with a disco synthesizer version of "Dominique.". Its promotional video featured Deckers traipsing around the ruins of an abbey with her acoustic guitar.   Not surprisingly, it failed to rejuvenate her career.  Click below to watch the promotional video of the disco version of "Dominque."

The true saga of The Singing Nun does not have a happy Hollywood ending.  Anxious about their mounting debt and despondent about the prospect of closing of their school for autistic children, 51 year-old Jeanine Deckers and Annie Pecher (born 1944) enacted a suicide pact.  On March 29, 1985, the two women deliberately overdosed on barbiturates and alcohol  On April 1, 1985, their bodies were discovered in their apartment at the Green Horizons Building at 144 Chaussee Bruxelles in Wavre, Belgium  They are buried in a cemetery in Wavre together. 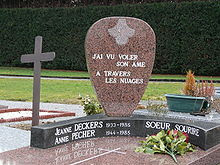 Below are the English and French lyrics to Dominque.

Now a heretic, one day
Among the thorns forced him to crawl
Dominique with just one prayer
Made him hear the good Lord's call
Chorus

To bring back the straying liars
And the lost sheep to the fold
He brought forth the Preaching Friars
Heaven's soldier's, brave and bold
Chorus

One day, in the budding order
There was nothing left to eat
Suddenly two angels walked in
With a loaf of bread and meat
Chorus

Dominique once, in his slumber
Saw the Virgin's coat unfurled
Over frairs without number
Preaching all around the world

Grant us now, oh Dominique
The grace of love and simple mirth
That we all may help to quicken
Godly life and truth on earth
Chorus