!.  The 1940 Summer Olympics were cancelled due to World War II.  Where were they originally scheduled to be held?


2.  Including the London Games of 2012, how many times have the Olympics been held in London, England?

A.  The Olympics have been held in London four times.

B.  They have been held in the British capital two times.

C.  They have been held in London three times.

D.  The 2012 Olympics mark the first time the Olympics have been held in London.


3.  Which famous boxer won a gold medal for the United States at the 1960 Olympics in Rome?


4.  How old was Romanian gymnast Nadia Comaneci when she scored a perfect ten in a gymnastic event at the Montreal Olympics in 1976?


5.  The colours of the five rings on the Olympic flag are blue, black, green, red and yellow?  Why were those colours chosen?

A,  A poll was taken among the athletes at the 1920 Summer Olympics and they chose those colours.

C.  They were the favourite colours of the flag's designer.

D.  A French psychologist,, Dr. Marcel Rousseau, was consulted and he advised that those colours would have the most impact and be the most inspiring.

E,  Those colours were chosen because at least one of them appeared on the flag of every country.


6.  Why is a long distance race called a marathon?

A.  It was named after a town in Greece.

B,  The first winner of the Olympic long distance race was Demetrius Marathon.

C.  It is derived from a Greek word meaning "long race."

D.  It was named after Marathon, a Greek god known for endurance and strength.

E.  It was named to honour an ancient Greek politician, Adelphos Marathon, who was instrumental in promoting long distance running.


7.  Switzerland boycotted the 1956 Summer Olympics in Melbourne, Australia.  Why?

A.  The Swiss were upset with the Australians over a diplomatic incident.

B.  They were angry about the disqualification of a Swiss athlete at the 1952 Summer Olympics in Helsinki, Finland.

C.  The Swiss boycotted the 1956 Games to protest the Soviet Union's invasion of Hungary.

D.  They boycotted the 1956 Olympics in response to Egyptian President Gamal Abdel Nasser's nationalization of the Suez Canal on July July 26, 1956.

E.  The Swiss boycotted the Melbourne Olympics in support of Taiwan.. They were  the People's Republic of China decided to boycott the event because of Taiwan had been allowed to compete under the name "Formosa."


8.  When and where were the first Winter Olympics held?

A.  The first Winter Olympics were held in Oslo, Norway in 1920.

B.  Davos, Switzerland played host to the first Winter Olympics in 1928.


9.  The great American athlete Jim Thorpe was stripped of  the gold medals he had won in  the decathlon and the pentathlon at the 1912 Olympics in Stockholm, Sweden.  Why?


A.  It was discovered that his U.S. passport was not valid.

B.  It was learned that he had played professional minor league baseball.

C.  Three days after the Olympics, he was arrested for disorderly conduct and disturbing the public.

D.  He was charged with theft.

E.  It was revealed that he had gambled money that he would win both the decathlon and the pentathlon.


10.  No women were allowed to compete in the first modern Olympics in Athens in 1896.  At the time, who said that the inclusion of women would be "impractical, uninteresting, unaesthetic and incorrect."

A.  Pierre de Coubertin, founder of the modern Olympics.

C.  Grover Cleveland, President of the United States in 1896

E.  William Milligan Stone, the American educator and historian who escorted the U.S. Olympic team to the 1896 Olympics.


11.  Which of these statements about the first Winter Olympic is not true.

A.  In hockey, the Canadian team scored 85 times over three games without allowing a goal.  Canada won the tournament by scoring 122 goals on their opponents.  Only three goals were scored against the Canadians.

B.  An American, Charles Jewtraw, became the first champion of the Winter Olympics by winning the first event, 500m speed skating.

E.  All of the above statements are true.


12.  Who was Constantin Henriquez de Zubiera?

A.  He was the first athlete from Belgium to win an Olympic medal.

B.  He was the French flag bearer at the 1924 Olympic Games in Paris.  He won two medals in swimming.

C.  He was the President of the International Olympic Committee from 1950 until 1958.

D.  He was the first athlete to win a medal in diving at the Olympics.

E.  He was the first black athlete to compete in the Olympics. 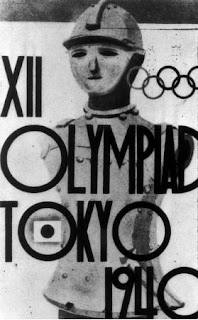 The 1940 Summer Olympics were originally awarded to Tokyo, Japan.  They were officially known as the Games of the XII Olympiad and were scheduled to take place in the Japanese capital from September 21 to October 6, 1940.  Due to the outbreak of war between Imperial Japan and China, the Japanese renounced the International Olympic Committee's Cairo Conference of  1938.  As a result, the IOC denied Japan its host status..

In July of 1940, the Japanese government withdrew its support for the Games.  The Games were then awarded to Helsinki, Finland, the second place finisher in the original bidding.  Following the outbreak of World War II, however, the Games were suspended.  They did not resume until post-war London hosted them in 1948.

The Olympics have been held in London three times - 1908, 1948 and 2012.  They were first held in the British capital in 1908.  Rome, Italy was originally awarded the 1908 Games but had to bow out due to the  huge volcano eruption of Mount Vesuvius in 1906.  As a result, the '08 Olympics were relocated to London.
In 1948, London hosted the first post-World War II Olympics.  The 2012 Summer Games give London the distinction of being the only city in the world to have hosted the Olympic three times.

In the 1960 Summer Olympics in Rome, Muhammad Ali (then known as Cassius Clay) won the gold medal for the U.S. in the boxing light heavyweight division.  There is an apocryphal Upon returning home to Louisville, Kentucky, the 18-year-old was refused service at a diner due to his race.  According to the story, his response was to throw Olympic medal in the Ohio.River.  The truth is that the gold medal was simply lost or misplaced.

At the Summer Olympics in Atlanta in 1996, Ali was presented with a replacement medal by the late Juan Antonio Samaranch, then President of the International Olympic Committee.  At the Opening Ceremony of those Atlanta Olympics, Ali, trembling from Parkinson's Disease, lit the cauldron to open the game.

To watch a video of Muhammad Ali receiving his replacement gold medal, click on the link below.

Those colours were chosen because at least one of them appeared on the flag of every country.  The Olympic flag was created in 1914 by Pierre de Coubertin, founder of the modern Olympic Games.  It was first flown during the 1920 Summer Olympics in Antwerp, Belgium.

Marathon is the name of a town in Greece.  According to legend, more than 2,000 years ago a Greek soldier named Pheidippides ran from Athens to Marathon, a distance of about 40.2 km. or 25 miles.  He arrived in Athens tired and bleeding with the news of  Greek victory in a battle with the invading Persians.  After informing the townspeople of the Greek success, he collapsed and fell to the ground dead.  In 1896, at the first modern Olympic Games in Athens, a race was held of approximately the same length as Pheidippides' run.

Switzerland and two other countries (Spain and Netherlands) boycotted the 1956 Summer Games in response to the Soviet Union's crushing of the Hungarian Revolution.  The 1956 Olympics were affected by
other boycotts too.  Egypt, Iran and Lebanon withdrew from the Games to protest Israel's involvement in the Suez conflict.  Less than two weeks before the November 22nd opening ceremony, The People's Republic of China boycotted the games over the inclusion of a team from Taiwan (Formosa0.

The first Winter Olympics were held in Chamonix, France from January 25,1924 until
February 5, 1924.  The event turned out to be very successful and it attracted 10,004 paying spectators.

Jim Thorpe was stripped of the gold medals that he won in the 1912 Olympics when it was discovered that he had played professional minor league baseball three years earlier.  Thorpe, one of the greatest athletes of the 20th century, was born on May 28, 1888 on Native American territory in what would later become the state of Oklahoma.  He was of mixed ancestry, aboriginal and European.  He had some French and Irish blood but he was mostly of aboriginal heritage, that of of Sac and Fox Nation.

About six months after winning his gold medals, Thorpe admitted that he had been paid to play baseball in North Carolina.  Not long after, the Amateur Athletic Union (AAU) and the International Olympic Committee (IOC), declared him to be a professional and requested that he return his medals.  His name was deleted from the record books. In solidarity with Thorpe, decathlon silver medalist Hugo Wieslander
of Sweden, rejected the gold medal when it was offered to him.  Jim Thorpe died at the age of 64 on March 28, 1953.  In January of 1983, three decades after his death, the IOC returned Thorpe's gold medals to his children.

Pierre de Coubertin, the French historian and pedagogue who founded the modern Olympics, was opposed to female participation in the first modern Olympic Games in Athens in 1896.

Clas Thunberg of Finland earned five medals, including three golds, not two, in the five speed skating events at the first winter Olympics in Chamonix, France in 1924.

Constantin Henriquez de Zubiera, who competed for France at the 1900 Olympics in Paris, was the first known black athlete to participate in the Olympic Games.  He was a Haitian-born French rugby union footballer.  He was also the first black Olympic gold medalist as he was a member of the French team that won the Olympic title at the first Rugby Olympic Tournament.  In addition., Henriquez de Zubiera won a silver medal in tug-of-war at the 1900 Olympics.