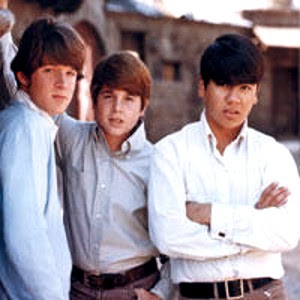 Here's how Billy Hinsche described the formation of the band to Forgotten Hits, an Oldies Music Newsletter:

Dino and I were longtime best friends and classmates in grammar school and started out as a duo - just me and Dino, following the lead of Chad and Jeremy and Peter and Gordon, and both of us just playing 6 string acoustic guitars.

It wasn't long before we realized that having a drummer would be a good idea and we should "go electric" and proceed as a trio.  We knew that Desi Arnaz, Jr. could play drums and so we asked him if he wanted to start a group with us - we asked him during lunch break out by the basketball court.  He was happy to accept the role of our drummer.

The newly formed trio performed at local neighbourhood parties.  At first they rehearsed at an outdoor playroom at the home of Lucille Ball and later at Dean Martin's home.  Dean's wife, Jeanne, was quite impressed with their music and asked Frank Sinatra to hear them play.  As Billy put it, the band "auditioned for Mr. Sinatra as he and Dean listened to us perform a few songs in the bar area of the Martin home - perfect, right?"  After the audition, Sinatra offered the boys a contract on his label, Reprise Records and they gladly accepted.

Due to their show business connections, Dino, Desi and Billy were able to obtain material from some of the top songwriters and promoters of their era such as Lee Hazelwood and Tommy Boyce and Bobby Hart.  They had two hit songs to their credit before any of the three had reached the age of 15.

In 1965, the band made the Top 40 charts with "I'm a Fool."  Later that same year, they enjoyed their second and final Top 40 success with "Not the Lovin' Kind."  On September 19, 1965, they performed on The Ed Sullivan Show.  Their appearance on that particular Sullivan show was noteworthy for two reasons.  It was the first colour broadcast of The Ed Sullivan Show and it took place at the CBS studios in Los Angeles, not in the studio in New York.

Dino, Desi and Billy continued to record until the end of the decade, but they never scored another Top 40 hit.  They released several cover songs including ones by The Beatles, The Rolling Stones, Bob Dylan and Dean Martin ("Memories Are Made of This")  Although their music has been dismissed as "bubblegum," the band did manage to carved a small niche in the musical history of The Sixties.  Desi, who was only 12 when "I'm a Fool" became a hit, remarked in 1992, "We tasted the world at an early age." "People still remember us," he said.  It all came to an end, however, in 1970 when the group dissolved and the three young men went on to pursue other interests.

Dino Martin, born in Santa Monica, California on November 17, 1951, began referring to himself as Dean Paul Martin.  An excellent athlete and Hollywood man-about-town, Dean Paul became involved in auto racing and had a tryout with the old World Football League.  He was also quite an accomplished tennis player who played for awhile on the professional tennis circuit.  His foray into acting did not fare quite as well.

The junior Dean Martin co-starred with Ali MacGraw in the 1979 tennis film Players.  It was his big screen debut and the reviews were less than enthusiastic.  From 1985 to 1986, he had a leading role as Dr. Billy Hayes on Misfits of Science, a short-lived superhero fantasy television series.

Dean Paul was only 19 years old when he wed actress Olivia Hussey (Romeo and Juliet) on April 17, 1971.  Their son, Alexander Gunther Martin, was born on February 12, 1973 and they divorced in 1978.  The dashing young Martin then romanced an American skating sweetheart.  Not long after her victory at the 1976 Montreal Olympics, Desi Arnaz, Jr. introduced Dean Paul to Olympic gold medalist figure skater Dorothy Hamill.  The storybook couple wed in January of 1982 in a traditional church ceremony at All Saints Episcopal Church in Beverly Hills and the guest list included such celebrities as Frank Sinatra and Jimmy Connors.  Barely 21 months later, however, Dean Paul moved out of their home and he and Dorothy divorced in 1984.

An aviation enthusiast, Martin received his pilot's licence as a teenager. In 1981, he was made an officer in the California Air National Guard and eventually became a Captain.  Sadly, his life was cut short when his Air National jet plane crashed in the San Bernardino Mountains of California during a snowstorm on March 21, 1987.  Martin, 35, and his Weapons Systems Officer, Captain Ramon Ortiz, died in the accident.  Dean Paul Martin was laid to rest at the Los Angeles National Cemetery (a U.S. Veterans Affairs cemetery in L.A.).

Desi (Desi Arnaz, Jr.) was born on January 19, 1953, the exact same day that his mother gave birth to Little Ricky Ricardo on I Love Lucy.  His full name is Desiderio Arnaz IV.  From 1968 until 1971, Desi appeared appeared with his mother, Lucille Ball, and his sister, Lucie, on Here's  Lucy.  He portrayed Lucy's television son, Craig Carter. In the 1992 film Mambo Kings, Desi played the part of his own father, Desi Sr.

Desi Jr. had some well-publicized relationships with Patty Duke and Liza Minnelli and he has been married twice.  His brief first marriage to actress Linda Purl lasted from 1980 to 1981.  On October 8, 1987, he wed Amy Bargiel in Nevada.  He and Amy have an adopted daughter, Haley Arnaz (born December 17, 1976).  They reside in Boulder City, Nevada and are the owners of the Boulder Theatre, where the Boulder City Ballet Company performs.  On January 19, 2012, Desi Arnaz, Jr. will celebrate his 59th birthday.

The third member of the group, William "Billy" Hinsche, was born in Manila, Philippines on June 29, 1951.  His sister, Annie Hinsche, was the first wife of Carl Wilson of The Beach Boys.  In fact, the group's final single, "Lady Love," was co-written by Billy Hinsche and Carl's brother, Brian Wilson, The Beach Boys' leader and chief songwriter.  Hinsche has provided background vocals for Warren Zevon and toured as a keyboardist with The Beach Boys.  He met his second wife, Juliette, at a Beach Boys concert.

To watch a 2009 interview with Billy Hinsche, click on the link below.