As the Sidney Crosby saga continues, let's remind ourselves that head injuries and concussions are nothing new to professional hockey.  Let's go back to the Dirty Thirties, to a time when Conn Smythe ruled the Toronto Maple Leafs and they played at Maple Leaf Gardens, the massive arena he built in 1931 during the Great Depression.  Let's remember the day Toronto Maple Leaf star Ace Bailey's career ended.

Irvine Wallace "Ace" Bailey played in the NHL from 1926 until 1933.  Born in Bracebridge Ontario on July 3, 1903, Bailey was raised in Toronto.  He played two seasons of junior hockey for St. Mary's in the Ontario Hockey Association.  In 1924-25, Bailey joined the Peterborough Seniors where he spent two successful seasons and celebrated an Allan Cup victory.

Ace caught the eye of the NHL's Toronto St. Patrick's.  The St. Pat's convinced him to try out with them and, on November 3, 1926, he signed with the team as a free agent.  During Bailey's rookie season, the financially ailing franchise was purchased by a consortium headed by Conn Smythe and renamed the Maple Leafs.  The team's green and white colours were changed to the familiar blue and white.

Ace Bailey became a star with the Toronto Maple Leafs.  During the 1928-29 season, he was the NHL's scoring leader with 22 goals and 10 assists in 44 games.  His life changed irrevocably, however, on December, 12, 1933.  It was on that day, exactly 78 years ago, that Bailey's hockey career ended cruelly and abruptly.  During the second period of a game between the Leafs and the Boston Bruins at the Boston Garden, Ace was hit from behind by defenceman Eddie Shore of the Bruins.  His head hit the ice, fracturing his skull.

Shore's attack on Bailey was in retaliation for a hipcheck from Leaf defenceman Red Horner.  Here's how Horner described the incident.

Eddie Shore was having a very frustrating night.  He was playing a great game but it wasn't getting him or the Bruins anywhere.  They couldn't scare us.  (Coach) Dick Irvin sent out King Clancy and myself and Ace Bailey up front to kill off (two) penalties.  Bailey was a very expert stickhandler, and he ragged the stick for awhile.  Eventually, Shore got his stick on the puck and made a nice rush deep into our end and I gave him a very good hipcheck.

Shore was stunned by that hard check from Red Horner and skated wildly toward Ace Bailey, likely confusing Bailey with Red Horner.  According to Horner, Eddie Shore "wanted to get even for the check I'd just put on him.  He thought Bailey was me.  He charged into Bailey on an angle from the side.  He hit Bailey and flipped him in the air, just like a rag doll.  Bailey landed on his head just a few feet from where I was standing.  Bailey hit the ice and went into some kind of convulsion.  I thought to myself, 'That's the end of Ace.'"

An unconscious Bailey began bleeding from the wound to his head.  Red Horner, upset by the injury to his teammate, knocked Eddie Shore to the ice.  Horner felt that "Shore skated away in a very nonchalant fashion.  I wasn't going to let him get away with it, so I went after him."

Eddie Shore suffered a deep gash to his head.  Both Bailey and Shore were carried off the ice by teammates.  While being attended to by Boston doctors in the Bruins' dressing room, Ace regained consciousness.  Shore approached him to apologize.  "It's all part of the game," Bailey uttered before losing consciousness again.  (Hmmmm.  I wonder if any hockey player has ever said it shouldn't be part of the game?)

By the next morning, Ace's condition was very grave.  The 30-year-old hovered between life and death.  His temperature surpassed 106 degrees Fahrenheit and it was feared that he would not survive his injury.  Bailey underwent two operations to relieve the pressure on his brain and Dr. Donald Munro, a brain specialist, declared that his chances of living were "very slim." With death seemingly imminent, a priest was summoned to give Ace the last rites.

Boston homicide detectives interviewed Shore and other players about the altercation.  If Bailey had died, Eddie Shore would have been charged with manslaughter.  When Ace's father was informed of his son's condition, he became so incensed that he armed himself with a handgun and took the train to Boston. to seek revenge on Eddie Shore.  Conn Smythe and his top assistant, Frank Selke, got word of the elder Bailey's plans and alerted the Boston police.  They located the distraught dad in the bar of the Leafs' hotel and sent him on a train back to Toronto without the weapon.

Ace Bailey began to recover.  By Christmas, and it was evident that he was going to survive, although he would never be able to play hockey again.  Boston manager Art Ross visited Bailey in the hospital and Ace told him that he did not believe that Eddie Shore willfully meant to hurt him.  The Leafs star then went to Bermuda to recuperate.

NHL president Frank Calder suspended Eddie Shore indefinitely and Red Horner was prohibited from playing until January 1, 1934.  It was not until Bailey's survival was assured that the NHL announced that Shore would be permitted to return to action on January 28, 1934.  He missed a total of 16 games.

An all-star benefit game was held in Ace Bailey's honour at Toronto's Maple Leaf Gardens on February 14, 1934.  The game featured the Leafs versus the best in the league.  Before the game, the All-Stars skated onto the ice in their regular team sweaters and a group photograph was taken.  Frank Calder then handed them their All-Star sweaters.  A hushed crowd at Maple Leaf Gardens looked on as Ace Bailey forgave Eddie Shore and shook his hand at centre ice.

The crowd cheered loudly as Bailey, dressed in street clothes, presented Eddie Shore with his Number 2 All-Star sweater.  Ace later stated, "I hold no grudge.  I see Eddie when he comes to Toronto for the games.  It was one of those things that happens."  Shore once said there was no bad feeling between them and that the incident was "purely accidental." 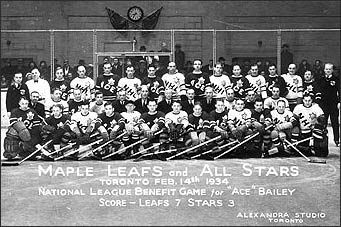 Before the opening face off of the Ace Bailey benefit game, Ace's Number 6 was retired, marking the first time in NHL history that a sweater number had been removed from use.  The fans roared their hearty approval when Conn Smythe announced that no Maple Leaf would ever wear the Number 6 sweater again.

The primary purpose of the benefit game, however, was to raise funds for Ace Bailey.  In this, it was highly successful.  Ace and his family received $20,909.40 in gate receipts from the game (a princely sum in Depression days).  As for the outcome of game, the hometown Maple Leafs defeated the All-Stars by a score of 7-3.  It should also be noted that the NHL All-Star Game took place more regularly after that 1934 event.

During his NHL career, Ace Bailey accumulated 111 goals and 82 assists in 313 games.  He was inducted into the Hockey Hall of Fame in 1975.  From 1938 until 1984, Bailey served as a penalty timekeeper at Maple Leaf Gardens, a position he enjoyed very much.  In 1984, when Ace was 81, Toronto Maple Leafs owner Harold Ballard dismissed him from his job.  The penny-pinching Ballard callously fired Bailey in order to save money.

Prior to the 1968-1969 season, Ace Bailey requested that Leaf forward Ron Ellis wear his retired number 6 sweater.  Ace admired Ellis' effective but clean style of play.  "Wearing No. 6 was my greatest honour ever as a Maple Leaf," said Ellis proudly.  "Ace Bailey personally asked me if I would consider wearing his number.  He had followed me for years and considered our styles of play comparable."  There was one stipulation, however.  Bailey told Ellis that once he left the game, the number would be retired again.  It was.

Eddie Shore died on March 16, 1985 in Springfield, Massachusetts.  He was 82 years old at the time of his passing.  On April 1, 1992, Ace Bailey suffered a stroke.  He passed away in Toronto on April 7, 1992 at the age of 88.  Sadly, Ace died without getting to see his sweater raised to the rafters at Maple Leaf Gardens.  The Leafs had planned to honour both him and Bill Barilko in a pregame ceremony on April 1, 1992, the very day of Ace's stroke.  The ceremony was delayed anyway because of a players' strike which shut down the league for ten days beginning on March 30.

Ace Bailey's Number 6 and Bill Barilko's Number 5 were finally hoisted to the rafters at Maple Leaf Gardens in a poignant display on October 17, 1992.  Ron Ellis and Ace's daughter Joyce were in attendance.