Doris Day is back! 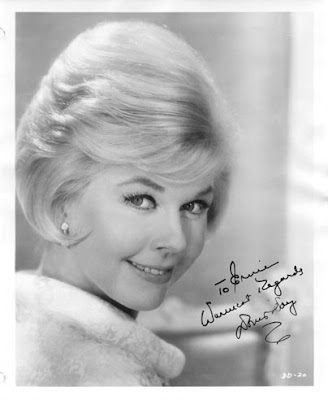 Doris Day lives a quiet life near Carmel-by-the-Sea, California.  She's 87 years old and has long been retired from show business.  For years, she has dedicated her life to the welfare of animals.  The Hollywood legend, however, has just released her first collection of new songs in 17 years.  It's called My Heart and was produced by Doris' late son, Terry Melcher.  The CD includes a track, "Happy Endings," performed by Melcher, and recorded before his death in 2004.  Day has also included a poignant, spoken- word introduction to her son's song.

Melcher, a record producer and musician, was Doris' son by her first husband, trombonist Al Jordan. When he was about ten years old, he was adopted by Day's third husband, Martin Melcher, and took his surname.  After battling melanoma cancer, Terry died on November 19, 2004 at the age of 62.  During his career, Melcher worked with The Beach Boys, The Birds and Ry Cooder.  He also co-wrote the Beach Boys' popular "Kokomo" from the movie Cocktail starring Tom Cruise.

Of her deceased son, Doris told Britain's Daily Telegraph: "I miss my Terry every day.  But I keep him here and I'm so happy that he's singing on the album.  I used to love to hear him sing and he should have done more things."  She said, "I get mail from his friends all the time saying he had so much talent and he was always laid back.  He didn't push himself.  He was such a good guy and I loved him dearly."

The Daily Telegraph published a Doris Day interview with Paul McCartney.  Doris and Sir Paul became friends about ten years ago when McCartney visited her home in Carmel Valley, California to discuss her animal rescue efforts through the Doris Day Animal Foundation.  McCartney, an ardent vegetarian, and Day, have a mutual interest in animal rights.  In the Daily Telegraph interview, Doris told McCartney that she just loves "animals, babies and music" (She didn't specify in which order).  To read the McCartney/Day interview, click on the link below.

My Heart was released in Austria and Germany on September 2, 2011, the United Kingdom on September 5th and in the United States on September 12th.  Its remastered recordings span from 1951 to 1994 and do not reflect Day's present voice.  In an interview with the UK's Yorkshire Post, Doris explained how it was brought to her attention that the recordings were in storage and that Sony wished to release them.  She admitted to having some "misgivings" at first, but liked them after they were remastered.

My Heart made it into the top ten charts in Britain, debuting at No. 9 and outselling Lady Ga Ga and Bruno Mars.  Doris Day made history by becoming the oldest artist to reach the top 10 in Britain with previously unheard material.  Tracks on the album include "You Are So Beautiful (To Me)," the Joe Cocker hit from the 1970s, and classics such as "My Buddy," which Day sang in the 1951 film I'll See You In My Dreams.   Also included is "Life is Just a Bowl of Cherries," Terry's favourite of his mother's recordings, and "Ohio," form the Leonard Bernstein musical Wonderful Town.  Ohio just happens to be Doris' home state and she was raised there.

The Cincinnati-born Day, whose first hit was "Sentimental Journey" in 1945, revealed to the Post that she does not listen to much current music.  She did, nevertheless, express a liking for Canada's own crooner, Michael Buble.  She remarked, "I think Michael Buble is marvellous but perhaps that's because he sings in a style I'm so familiar with."

To listen to a BBC interview of Doris Day speaking about her album, please click on the link below.  This is her website on which occasionally records messages for her fans.

EDITOR'S UPDATE (April 11, 2014): Doris Day celebrated her 90th birthday greeting fans and posing for photos.  She was born Doris Mary Ann Kappelhoff in Cincinnati, Ohio but there has been a public dispute about whether her actual birth date is April 3, 1922 or April 3, 1924. Throughout her career, Doris has given her birth year as 1924.  However, census records and her biographer (David Kaufman) cite 1922 as the correct year of her birth.

Since Doris considers April 3, 1924 to be her birth date, she decided to make her first public appearance in years at her 90th birthday party.  She was the surprise guest of honour at the birthday celebration in Carmel-by-the-Sea, California on Friday, April 4, 2014.  Fans from all over the world were invited to attend the event, although it is uncertain whether there had been definite plans for Doris herself to show up.

The party took place at Carmel's Cypress Inn, owned by Doris since the 1980s.  It was held to benefit the Doris Day Animal Foundation and Peter Marshall, who hosted The Hollywood Squares, was the emcee.  Fellow animal lover, 92-year-old Betty White, conveyed birthday greetings to Doris via video.


EDITOR'S UPDATE (April 4, 2017):  The mystery surrounding Doris Day's actual birthdate has finally been solved.  The Associated Press did some investigating and obtained a copy of Doris' birth certificate from Ohio's Office of Vital Statistics.  The birth certificate indicated that Doris Mary Kappelhoff was born on April 3, 1922, not 1924.  Therefore, she turned 95 years old yesterday, not 93.  Doris took the news in stride and issued the following statement: "I have never paid much attention to birthdays, but it's great to finally know how old I really am."

The revelation also means that Doris is only a few months younger than her friend, Betty White.  Betty was born on January 17, 1922.