WARNING CANADA! Don't give Stephen Harper and the Conservatives a majority 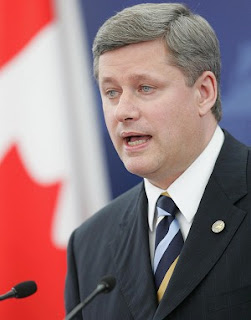 Don’t do it, Canada! I implore you! Don’t give Stephen Harper the majority government he so hungrily craves. I know you are weary of minority government. I realize that this is the fourth election in seven years. Before you mark your ballot on May 2, however, please consider these points.

Minority government can work extremely well with the right prime minister, one who truly respects democracy and the opposition parties. From 1963 until 1968, Lester Pearson's minority governments introduced universal health care, student loans, the Canada Pension Plan, the Order of Canada and the Canadian maple leaf flag. Not a bad record, eh?

If you think our current prime minister is controlling, secretive and ultra-partisan now, he’ll be far worse if he leads a majority government. In fact, he’ll be insufferable. You’ve seen how he has governed with a minority government. Those with whom he disagrees have had their funding cut off and documents tampered. A House of Commons committee has found the Harper government in contempt of Parliament for stonewalling on the full cost of its crime bill, including its plans for big prison expansions.

Consider that Bruce Carson, a former top advisor to Stephen Harper, was convicted of five counts of fraud. He defrauded two different banks with regard to the rental of a Toyota vehicle from a car-rental company. Although Harper has denied any knowledge of his former senior aide’s criminal past, a proper security check would have revealed the truth. Why wasn’t that done on someone who was hired to be in the Prime Minister’s Office?

What about Canada’s place in the world? Under the leadership of Stephen Harper, Canada suffered the embarrassment of losing a seat at the United Nations Security Council. Canadians are no longer as respected around the globe as we once were. We have lost our reputation as an “honest broker” and a leader among peacekeeping nations. Our environmental record is a joke.

Stephen Harper is the most ideologically-driven prime minister in Canadian history. He wants to change the very nature and character of this country. The Conservative Party, under his leadership, is not the party of John Diefenbaker, Joe Clark, Robert Stanfield or Brian Mulroney. Those men were certainly economic conservatives, but they were not neo-conservatives. They differed significantly from the far-right Republicans of the United States. Harper’s ideology is more akin to that of the Tea Party movement south of the border. The Tea Partiers are his soul mates and he would be right at home with them.

It is noteworthy that during this election campaign, the Conservatives unveiled a flashy 60-second ad titled “Our Country.” The ad bears remarkable similarity to an ad used by former Minnesota governor and 2012 Republican presidential candidate, Tim Pawlenty. Pawlenty has Tea Party support and his ad is a panorama of patriotic moments in United States history. It is a display of America’s geographical beauty and the military might of its fighter jets, set to orchestral music and a speech by Pawlenty.

Not surprisingly, The Conservative Party’s “Our Country” has an almost identical theme. It features clips of the 1988 Olympic torch relay, Paul Henderson’s 1972 goal, fighter jets, marching soldiers and views of Canada’s geographical splendour.

A Harper majority will continue to spend your hard earned tax dollars on jails and fighter jets. This money should be spent on health care and education. If you are truly concerned about poverty or the environment, don’t expect a Conservative government led by Stephen Harper to do anything about it. These are not priorities for this government.

Diefenbaker, Clark, Stanfield and Mulroney never would have killed such a valuable resource as the long-form census. They never would have been so unconcerned about the environment. They had some decency, some degree of social conscience.

The Harper government likes to take credit for steady economic leadership. The Conservatives point to how well Canada has weathered recession. They consider themselves to be good economic managers. Don’t forget, however, that this country had a budget surplus when Paul Martin left office. It now has a large deficit.

The Tories were quick to associate themselves with stimulus programs that helped Canada recover from the recession. They portrayed “Canada’s Economic Action Plan” as a “Conservative” economic action plan. Remember, however, that the money for stimulus programs came from you, the taxpayer. Remember too, that conservatives do not generally support spending money on public works. That is considered Keynesian economics. Keep in mind that Canada weathered the storm of the recession better than most countries because of the regulations on our financial institutions. Conservatives are ideologically opposed to such regulation.

Stephen Harper’s Conservative government has wasted millions of taxpayers’ dollars on F-35 fighter jets, prisons and a G20 summit in Toronto. The G20 summit was a $1 billion boondoggle. It was unnecessarily inflicted on Toronto and it transformed Canada’s largest city into an armed camp. The summit should have been held at a military base, not in the centre of a large metropolis.

If you support gun control, you should be concerned about the fact that Stephen Harper is determined to scrap the long gun registry.  The prime minister makes no secret of this and he clearly reiterated his intention during the television debates.  If his government wins a majority, you can be sure he'll do everything in his power to abolish the registry.  This will result in more guns falling into the wrong hands.  It will mean more gun-related deaths in this country.

This week, I watched both the English and French language debates. Yes, Stephen Harper appeared reasonable, calm and collected – but look beneath the surface! Did you notice, for instance, the contemptuous manner in which he looked at his political opponents? While they spoke, he stood there with a smirk on his face. There is no doubt that the Tory leader has been placed on a leash and that the Conservative Party is running a tightly-controlled campaign. This, of course, is classic strategy for a front-runner.

Harper has limited the number of questions he will answer. He keeps stressing that this election is unnecessary and sticks to his mantra that the only thing people care about is the economy. Democracy, it seems, is just an annoying inconvenience. The campaign is merely something he has to endure in order to achieve his goal of a majority government.

Don’t be fooled by negative ads and simplistic slogans such as “tax cuts” and “tough on crime.” Don’t be sidetracked by Conservative fear-mongering about a coalition. Harper himself was willing to make a deal with the Bloc Quebecois in 2004. Remember that in our parliamentary system of government, the party which governs is the party that holds the support of the House of Commons. This is not an American presidential campaign. We are not voting for a head of state. It is not simply a contest between leaders named Harper, Ignatieff and Layton. We are voting for the party we believe is best suited to govern this great nation.

On May 2, restore the “Government of Canada” and reject the “Harper Government.” Our government belongs to you, not to Stephen Harper or the Conservative Party. This is a wake-up call to Canadians. Let it never be said that I didn’t warn you.