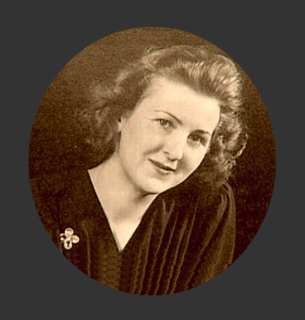 Who was the woman who married Adolf Hitler and committed suicide with him in a Berlin bunker? One wonders how she could possibly have cared for such an evil and repulsive man. On the 99th anniversary of Eva Braun’s birth, let’s take a look at her life.

Eva Anna Paula Braun was born in Munich, Germany on February 6, 1912. She was the second of three daughters born to Freidrich Braun and his wife, Franciska Kronberger. There was nothing extraordinary about Eva’s childhood. Both of her parents came from reputable Bavarian families. She and her sisters, Ilse and Gretl, lived a respectable middle class existence and took part in normal activities such as music, dance and art lessons. Their father, Freidrich, was a Catholic school teacher.

The young Eva had one year of education at a convent school where she studied economics and bookkeeping. For several months, she worked as a receptionist at a medical practice in Munich. She then found employment as an office assistant and model for Heinrich Hoffmann, Hitler’s personal photographer. Braun first met the Nazi leader at Hoffmann’s studio in October of 1929. She began seeing him about two years later. He was 23 years older than she.

In the earlier years of her relationship with Hitler, Eva Braun attempted suicide twice. In November of 1932, she endeavoured to shoot herself in the throat, but missed the jugular. In 1935, she tried to take her own life by overdosing on barbiturates. On both occasions, she cited the reason as Hitler’s neglect.  After the second suicide attempt, however, Hitler purchased a villa in Munich for her and also provided her with a Mercedes and a personal chauffeur.

In 1933, when Hitler became Chancellor of Germany, Eva Braun sat on the stage in the section reserved for VIPs as his secretary. She was placed among the wives of other ministers. By 1936, Eva Braun was a part of Hitler’s household at his country home at Berghof near Berchtesgaden.

Eva Braun was not particularly political and it is uncertain whether she was actually an official member of the Nazi Party. Her interests lay in photography, sports and exercisie, her two Scottish Terrier dogs named Negus and Stasi, and makeup.  In 1943, when Germany transitioned to a war economy, luxury products such as cosmetics faced a ban. According to Albert Speer in his memoir, Inside the Third Reich, Braun approached Hitler with her concerns, after which Hitler ordered Speer to stop production of women’s cosmetics rather than ban them completely.

Eva Braun was a fashionable woman and took care of her appearance. Here is how Traudl Junge, Hitler’s youngest secretary describes Braun in her memoirs Until the Final Hour.

She was very well dressed and groomed, and I noticed her unaffected manner. She wasn’t the kind of girl you saw on recruiting posters for the BDM (League of German Girls) or woman’s magazines. Her carefully done hair was bleached, and her pretty face was made up - quite heavily but in very good taste. Eva Braun wasn't tall but she had a very pretty figure and a distinguished appearance. She knew just how to dress in a style that suited her and never looked as if she had overdone it - she always seemed appropriately and tastefully dressed, although she wore valuable jewellery.

She and Hitler had a few lifestyle disagreements. The German dictator, a vegetarian, did not approve of cosmetics because they contained animal by-products. Hitler was a non-smoker and disapproved of Braun’s smoking habit. He was also unhappy about her predilection for nude sunbathing.

For many years, Eva Braun kept a low profile. She lived a sheltered and comfortable life throughout World War II. Although Braun was an important person within Hitler’s social circle, she did not attend public events with him and they never appeared together as a couple at formal occasions.  It was not until the summer of 1944 when Eva’s sister Gretl married an SS liaison officer that she was deemed acceptable as part of Hitler’s official entourage.

On March 7, 1945, with the collapse of the Nazi regime imminent, Eva Braun drove to Berlin to be with Adolf Hitler at the heavily protected bunker beneath the Reich Chancellery. On April 29, 1945, as Red Army troops closed in on the city, she married the 56-year-old Hitler in a quick civil ceremony. Fellow Nazis Joseph Goebbels and Martin Bormann were witnesses to the marriage. Less than 40 hours later, on April 30th, the newlyweds committed suicide together in a sitting room of the bunker. Braun, 33, consumed a cyanide capsule and Hitler shot himself in the head with his own pistol. Their dead bodies were doused with gasoline and burnt, as requested by Hitler.