Once in the racket you’re always in it. 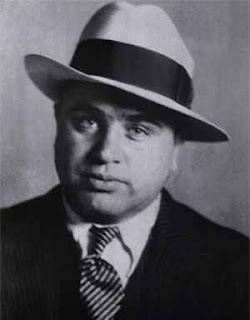 Today is the 112th anniversary of the birth of the notorious gangster Al Capone. He was born Alphonse Gabriel Capone in Brooklyn, New York on January 17, 1899, the fourth of nine children.  His father, Gabriele Capone, came from a small town near Naples. Gabriele was a pasta maker and later a lithographer in Italy. After immigrating to the United States in 1893, he became a barber.

The young Al Capone was expelled from school at the age of 14 for retaliating against a female teacher who had hit him. He never returned to school after that incident. In between scams, Capone worked at several odd jobs. He was employed as a clerk at a candy store, a pin setter at a bowling alley and a cutter in a book bindery. He joined the Five Points gang in Manhattan and worked as a bouncer and bartender at the Harvard Inn on Coney Island, a dance hall and saloon owned by gangster Frankie Yale.  It was there that his face was slashed during a fight and he acquired the scars that earned him the moniker “Scarface”. When photographed, he tried to hide the left side of his face.

Al Capone disliked the nickname "Scarface" and said that his scars were the result of war wounds.  He much preferred his other nickname, "Snorky" because it meant "classy" or "high class"  Capone wanted to be regarded as a sharp dresser.  He spent much money on clothes and jewellery and considered himself to be a fashionable man of good taste.

In 1918, Capone met an Irish lass named Mary “Mae” Coughlin. Mae gave birth to their son Albert “Sonny” Francis Capone on Dec. 4, 1918. The couple were married on December 30, 1918. Since Al Capone was under the age of 21, his parents were required to sign a consent form in order for their son to wed.

While in his early twenties, Capone moved to Chicago and became increasingly involved in gang activities. On January 16, 1920, the 18th Amendment to the United States Constitution had taken effect, outlawing the production, transportation and sale of alcohol. During Prohibition, The Windy City was rife with opportunity to make money smuggling illegal alcoholic beverages into town. From the early 1920s until 1931, Capone headed a crime syndicate dedicated to smuggling and bootlegging liquor. He also participated in various other criminal activities such as bribery of public officials and prostitution.

Al Capone’s influence and power grew to the point where he became a celebrity mobster.  His gang operated largely free of legal interference, setting up casinos and speakeasies throughout Chicago. Despite his illegal activities, Capone became a highly visible personality. He would say that he was just a businessman giving the people what they wanted. Capone gained infamy, however, when the public learned of his involvement in the bloody St. Valentine’s Day Massacre of February 14, 1929. Seven of Capone’s rival gang members were killed in a shootout at a garage in the Lincoln Park neighbourhood on Chicago’s North Side. Capone himself may have ordered the shootings. No one was ever brought to trial for the killings.

The jig was finally up for Al Capone when he was found guilty of tax evasion in 1931. He was given an 11-year sentence and heavy fines. The powerful mob boss was sent to a tough federal penitentiary in Atlanta, Georgia in May of 1932. His time behind bars also included a stay at the infamous Alcatraz prison in California where he was incarcerated for 4 ½ years. He arrived at the island near San Francisco on August 22, 1934 with over 50 other convicts from the Atlanta Federal Penitentiary.

At Alcatraz, Al Capone was given no special privileges and he never saw the outside world. His tasks included sweeping the cell house and working in the laundry. He was placed in isolation for eight days after fighting with another convict in the recreation yard. While working in the prison basement, Capone was stabbed with a pair of shears by a fellow inmate waiting in line for a haircut.

During his time prison, Al Capone’s mental and physical health declined quickly due to the fact that he was suffering from syphilis. He had contracted the disease years ago, but had avoided treatment for it. Early in 1939, Capone was transferred to the Federal Correction Terminal Island in Southern California to serve the remainder of his 11-year sentence. On January 25, 1947, he died in St. Louis, Missouri from cardiac arrest after suffering a stroke. At the time of his death, “Scarface” Capone was 48 years old.