Hey Sixteeners, I have a little challenge for you today. Check out the Language Corner below.

To my knowledge, there are four words in the English language that end in “dous". One of those words is “tremendous". Do you know the other three? I will publish the answer in my next blog entry. 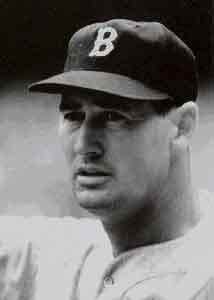 Baseball great Ted Williams was born on this day, 92 years ago. The “Splendid Splinter” was born in San Diego, California on August 30, 1918. It is interesting to note that his team, the Boston Red Sox, won the World Series the same year as his birth, particularly since they failed to win another World Series until 2004.

Ted Williams enjoyed a lengthy career. He played for the Boston Red Sox from 1939-42 and from 1946-60. During World War II, he served in the United States Navy. The magical 1941 season was a special one for Williams and it was one for the ages for baseball fans everywhere. That year, Ted finished the season with a batting average of .406 and Joltin’ Joe DiMaggio of the New York Yankees thrilled fans with a 56-game hitting streak. The accomplishments of those two players live on. Ted Williams is the last major leaguer to have batted .400 or more and no player has equalled DiMaggio’s 56-game hitting streak.

Ted Williams ended his playing career with a bang, literally and figuratively. He hit a home run in his last at-bat at Boston’s Fenway Park. He died in July 5, 2002 at the age of 83.

Click the link below to watch Ted Williams’ appearance on the old game show What’s My Line? in 1954.

Yesterday was Dave Stieb day at the dome as the Blue Jays celebrated the 20th anniversary of Stieb’s no-hitter against Cleveland on September 2, 1990. Unfortunately, the Jays lost 10-4 to split a four-game series with the Detroit Tigers.

Stieb looked well and fit. I noticed the moustache is gone.