The Career of Brenda Lee

In a 2014 interview with Hellenic New of America, Brenda Lee defined her success as "the realization of a dream I had when I was just a little girl.  That dream was to sing, so I had fulfilled that dream along with the fans that have allowed me to do that."

The song "Dynamite" led tp Bremda's lifelong nickname, "Little Miss Dynamite."  At approximately 145 metres (4 ft. 9 inches) tall, the petite singer is a ball of fire and she has a powerhouse voice. She was a child prodigy who became the most successful female artist of the late 1950s and early 1960s.  Her 47 U.S. chart hits during the 1960s is only surpassed by Elvis Presley, the Beatles and Ray Charles.  She is best known for the hit single "I'm Sorry" and the perennial Yuletide favourite "Rockin' Around the Christmas Tree."

Brenda Lee was born Brenda Mae Tarpley on December 11, 1944 in the charity ward of a hospital in Atlanta, Georgia.  Her birth came during World War II and she had an impoverished childhood.  Her family lived in a series of three-room houses without indoor plumbing.  According to Biography, Brenda's father, Reuben Lindsey Tarpley, was a caring dad, but he was an alcoholic and he was killed in a construction accident when Brenda was 6 (some sources, such as Rolling Stone, claim she was 8).

After Reuben's death, Brenda's mother, Annie Grace (née Yarbrough), was left to work long hours in a cotton mill in order to support Brenda and her siblings, a younger brother and older sister.  The family came to depend on Brenda's earnings as a singer at local events and on radio and television.  In an interview with the Women of Rock Oral History Project, Brenda explained that once she  earned her first $20, she was pleased to give it to her family.   "Even at that young age, I saw that helped our life," she said. "It put some food on the table. It helped, and I loved it."

Annie Grace eventually remarried.  Her new husband, Jay Rainwater, was a record store owner and Brenda would sing at stepfather's store on weekends.  At the same time, a local disc jockey helped the young singer get air time.  The DJ also encouraged  her to shorten her last name from Tarpley to Lee.

Brenda displayed her singing talent early in life.  At the age of five, she won a talent show.  In 1956, at the age of 11,, she was hired by a Missouri-based variety show called "Ozark Jubilee."   In July of that same year. she signed a contract with Decca Records.  Her first Decca single was a cover of  a Hank Williams composition called "Jambalaya (On the Bayou),"

In December of 1956, Brenda spent her 12th birthday in Las Vegas.  She told the Lass Vegas Review-Journal that she was at the Flamingo Hotel with the Ink Spots.  "As I remember it," she said, "I was kind of weaved in and out of the show as a kind of little hostess.  And I also sang - so we co-billed." 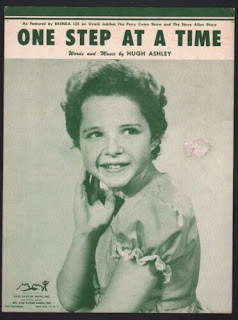 "I'm Sorry" is Brenda's signature song, but her biggest selling track is "Rockin' Around the Christmas Tree,"  She recorded the song in July of 1958  when she was only 12 years old.  It was written by Johnny Marks, the composer of  "Rudolph the Red-Nosed Reindeer" and "A Holly Jolly Christmas."  As Brenda told Billboard, the record was cut in the heat of the summer at the Quonset Hut, the legendary studio in Nashville, Tennessee.  When she walked into the studio, producer Owen Bradley "had it all decked out like Christmas.  I was only 12 going on 13, so that was a biggie to me.  Everybody was dressed Christmassy and the lights were low.  He had a Christmas tree.  It was wonderful.?"

"Rockin' Around the Christmas Tree" was released by Decca Records for the holiday season of 1958 and again in 1959.  It really gained popularity in 1960 when Brenda had a huge hit with "I'm Sorry."  The song reached No 14 on the Billboard Hot 100  that year and became a Christmas standard, appearing on a variety of charts for over 50 years.  According to SoundScan, it is one of the top five best-selling digital singles.

In 1960, Brenda Lee  recorded "I'm Sorry," which hit No. 1 on the Billboard Hot 100 singles chart in July of that year.,  It was Brenda's first gold single and it was nominated for a Grammy Award.  According to Fred Bronson's Billboard Book of Number One Hits, Brenda recorded "I'm Sorry" in early 1960, but Decca Records delayed its release for several months due to its concern that a 15-year-old was not mature enough to sing about unrequited love.

During the late 1950s and early 1960s, Brenda enjoyed greatest success on the pop charts.  By the late 1960s. however, Brenda's popularity had waned and her career had taken a downward turn.  In the  early 1970s, she re-established herself as a country music artist with a string of country hits such as "Nobody Wins" (1973) and "Sunday Sunrise." (1973).
Brenda Lee is an international star.  Early in her career, she was particularly popular in the U.K.  She has recorded in four different languages.

In November of 1962, Brenda Lee met Ronnie Shacklett at a Bo Didley and Jackie Wilson concert in Nashville, Tennessee.  They were married less than six months later, on April 24, 1963, when Brenda was 18 years old.  She and Ronnie have two daughters, Jolie and Julie.  Julie was named after the daughter of  country music star Patsy Cline (Patsy died in a plain crash in March of 1963),

* In December of 1957, 13-year-old Brenda made her debut at the Grand Old Opry.  A photo was taken of her and 22-year-old Elvis Presley backstage at the Ryman Auditorium.  Elvis later gifted her wit a "Tender Loving Care" necklace, which he occasionally gave to female friends.  Brenda treasures that necklace.

* In 1962, while touring West Germany, Brenda Lee appeared at the famous Star Club in Hamburg. The opening act for her show was an up-and-coming band from Liverpool, England called the Beatles.

* Brenda appears in a 1961 a episode of The Danny Thomas Show, entitled "Teenage Thrush" (Season 8, Episode 31, Air Date: May 15, 1961).  Brenda's character is a talented young singer whom Danny thinks could make a big name for herself.  However, the girl's mother wants her to finish her education first.

Below is a photo of Brenda on The Danny Thomas Show in 1961.

* Brenda recorded a duet with American singer-songwriter Willy DeVille in 1992 for his album Loup Garou.
* Brenda's autobiography, Little Miss Dynamite: The Life and Times of Brenda Lee, was published in 2002 by Hyperion.