America on the Brink: The Aftermath of a Tragic 4th of July in the USA 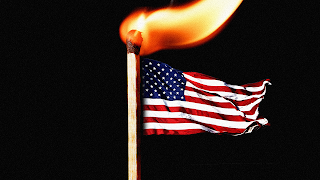 "If there's a child on the south side of Chicago who can't read, that matters to me, even if it's not my child.  If there's a senior citizen somewhere who can't pay for her prescription and has to choose between medicine and the rent, that makes my life poorer, even if it's not my grandmother.  If there's an Arab-American family being rounded up without benefit of an attorney or due process, that threatens my civil liberties.  It's that fundamental belief, I am my brother's keeper, I am my sister's keeper - that makes this country work.  It's what allows us to pursue our individual dreams, yet still come together as a single American family.  'E plubum unum."  Out of many, one.

Yet even as we speak, there are those who are preparing to divide us, the spy masters and negative ad peddlers who embrace the politics of anything goes.  Well, I say to them tonight - there's not a liberal or conservative America - there's the United States of America.  There's not a black America and white America and Latino America and Asian America; there's the United States of America.  The pundits like to slice-and-dice our country into Red States and Blue States; Red States for Republicans, Blue States for Democrats.  But I've' got new for them to.  We worship an  awesome God in the Blue States, and we don't like federal agents poking around out libraries in the Red States . . .

Donald J. Trump and his enablers, such as Mitch McConnell and William Barr, have happened.  The Trump administration has taken America to a dark and dangerous place, a place where it has never been before.  America is on the precipice.  It faces enormous challenges, and a long road to recovery in 2021, provided Donald Trump is no longer president. 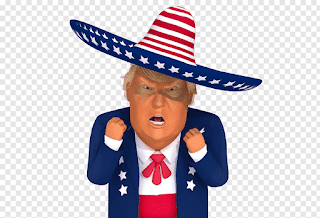 Yesterday, on Independence Day, the nation marked its 244th birthday amid a virus that is growing out of control and severe racial unrest.  America is on the brink and something has got to give.  The situation is comparable to the Civil War of 1861 - 1865 or the attack on Pearl Harbor on December 7, 1941.


I've been carefully following the 2020 American presidential election campaign.  I've been a keen observer, even though, as a  Canadian, I don't have a vote.  As a citizen of the world, however, I certainly have a crucial stake in the outcome.  The world has suffered enough with this horrid pandemic.  Four more years of Donald Trump will be an added nightmare and a real setback for global harmony and for the environment.

One of the most important duties of a national leader is to unite the country.  Trump has done nothing but sew the seeds of division.  If Abraham Lincoln was the Great Emancipator, then Donald Trump is the Great Divider.  He has divided the United States along racial lines, economic lines and partisan lines.  He has divided rural and urban Americans, college-educated and non-college educated Americans, native-born Americans and immigrants.  He has even divided America from other countries with his "America First" policy.  He has shunned traditional European allies such as Germany and France.  He doesn't understand that the United States cannot separate itself from the rest of the world.  We all share this planet.

Trump's crassness and his lack of compassion have been sadly evident since he assumed the office of the presidency of the United States.  These qualities have  been especially evident in his approach to the COVID-19 pandemic.  To date, An estimated 230,000 Americans have lost their lives to the deadly virus, and their purported leader refuses to take take the crisis seriously.  He has declared that one day it will magically go away.  It will suddenly disappear and everything will be wonderful, never mind the people who have suffered and died.  His re-election is more important to him than any individual human life.

The virus is out of control in the United States.  This should never have happened, and it wouldn't have happened if Trump had taken the situation seriously from the beginning.   Now he's putting lives at risk by holding rallies without social distancing or masks.  He's trying to drown out the voices of respected physicians such as Dr. Anthony Fauci, an immunologist and an expert on infectious diseases.  How can Donald Trump even presume to think he is as knowledgeable as Dr. Fauci in dealing with the virus.  Tell me, where and when did Trump receive his medical degree?

Donald Trump refuses to treat the pandemic as a health crisis.  As always, he views the world with dollar signs in his eyes.  He looks at it with his own self-interest in mind.  He only sees it as an economic crisis that he can readily fix as long as the stock market is bullish.  He will not face the fact that this pandemic is far from over.  The virus is spreading rapidly across the United States.  Yew, the crisis will end someday, but it's not over yet, not by a long shot.  Donald Trump is deluding himself and misleading his followers when he says otherwise.  The rest of the world knows how poorly the United States has handled COVID-19.  That's why European countries will not open their borders to Americans.  That's why we Canadians are also fearful of opening our border to our southern neighbours.

That is also why the November 3rd is so important.  I do not exaggerate when I say it is the most significant presidential election in American history.  It must be fair and free.  Mail-in voting must be accepted and allowed.  For the sake of the world and for the sake of American democracy, Donald Trump must go down to electoral defeat or he must resign.  I shudder to think what will happen if he holds on to power.

Joe Biden is leading by a comfortable margin in the polls, but November is still months away.  Something could change drastically or Trump could play some dirty tricks, with the help of his good friend, President Vlladimir Putin of Russia, to whom he is greatly beholden.  He will not criticize Putin even though the New York Times received intelligence (largely corroborated)  that Russia paid  bounties to Islamic militants in Afghanitan in return for killing American soldiers.  This is a disgrace and it is nothing short of treason.

Americans cannot afford to be complacent.  Americans must remain vigilant.and keep a watchful eye on Trump and dictator Putin.  In the coming months, I will will watch history unfold with great anticipation  I am writing this because I am extremely concerned about the state of the world.   I don't have a vote in the U.S, election, so this is my outlet.  It is the best way I can express myself and my strong concerns.  Frankly, I am terrified for the future of humanity if Donald Trump wins reelection or if he refuses to let go of the reins of power.