Lighthouses have always fascinated me.  I had the opportunity to visit many of them when I toured Newfoundland's Avalon Peninsula  in the summer of 2001 and I also visited the famous lighthouse at Peggy's Cove, Nova Scotia back in the 1990s.  It was, therefore, interesting for me to learn that Robert Louis Stevenson, author of such classics as Treasure Island, Kidnapped and Strange Case of Dr. Jekyll and Mr. Hyde, came from a family of lighthouse designers.  In fact, 14 lighthouses dotting the coast of Scotland were built by Stevenson's ancestors.

Robert Lewis Balfour Stevenson was born in Edinburgh, Scotland on November 13, 1850, the only child of Margaret Isabella Balfour, the daughter of a minister of the Church of Scotland, and Thomas Stevenson, a prominent lighthouse engineer.  Thomas's brothers, Alan and David, were also lighthouse builders.

Thomas Stevenson was an expert in optics as applied to the illumination of light houses.  He designed many lighthouses in and around Scotland with his brother David and with David's son, David Alan Stevenson.  A man of great accomplishment, Thomas was also a meteorologist.  He invented the Stevenson screen, an enclosure that shelters meteorological instruments from rain and heat radiation.


Robert Louis Stevenson was a thin, sickly child.  He suffered from lung ailments and nearly died of gastric fever in 1858.  Despite his ill-health and weak constitution, he frequently accompanied his father on official visits to the lighthouses on the Scottish coast.

At about the age of 18, Stevenson dropped his baptismal names of  "Lewis Balfour" and began referring to himself as "Robert Louis."  His close friends and relatives, however, addressed him as "Louis."  In 1867, he entered the University of Edinburgh with the intention of following the family tradition and becoming a lighthouse engineer.

In 1868, as a student engineer, Robert Louis Stevenson travelled to the Scottish coastal villages of Anstruther and Wick.  Prone to ill health since childhood, Robert was not the most robust fellow. Although he tried to be an engineer, he didn't have the stamina required for the outdoor work. More importantly, his heart was not in it.   His preference was for a career in literature.  He could no longer ignore his passion and his great talent for writing.  Around 1870, much to the disappointment of his father, Stevenson abandoned lighthouse building in order to become a writer.

In Underwoods, his 1887 poetry collection, Stevenson reflects on his decision to turn away from the family tradition.

Say not of me that weakly I declined
The labours of my sires, and fled the sea,
The towers we founded and the lamps we lit,
But rather say: In the afternoon of time
A strenuous family dusted from its hands
The sand of granite, and beholding far
Along the sounding coast its pyramids
And tall memorials catch the dying sun,
Smiled well content, and to this childish task
Around the fire addressed its evening hours.


It is obvious from the these line of poetry that Stevenson did not make light of his decision to leave the family profession.  He even wrote a book called A Family of Engineers in which he chronicled the Stevenson family tradition.  Thomas Stevenson, for his part, accepted his son's wishes with sadness and resignation.

According to Life of Robert Louis Stevenson by Alexander Harvey, "Thomas Stevenson, after his first outburst of natural and profound regret, countenanced the literary ambitions of his only son, and gave up with a sigh his one paternal dream.  Nevertheless, the notion that his Louis should grow into maturity without even a nominal profession - literature being inconceivable as the avowed calling of a respectable person - was opposed to a strict Calvinist’s sense of duty to a son."

In order to placate his father and have a "nominal profession," Stevenson reluctantly switched his area of study to law.  Although admitted to the Scottish bar in 1875, he never actually practised law or became involved in the legal profession.  Instead, he went to France.

It was in Grez-sur-Loing, an art colony south of Paris, that Robert Louis Stevenson met the love of his life. She was an American named Fanny Vandegrift Osbourne whom Alexander Harvey describes as "a small, dark young woman with clear-cut delicate features, and endless sable hair. Indianapolis-born Fanny was the wife Samuel Osbourne, a veteran of the American Civil War. They had married when Fanny was just 17 and had three children, although their son Havey died of tuberculous in Paris on April 5, 1876.  The family eventually settled in Virginia City, Nevada where Samuel began cavorting with saloon girls.

Angry at the repeated infidelities of her husband, Fanny had come to Grez with her two young children, Isobel and Lloyd, to study art.  Stevenson became enamoured with the American. Against the advice of friends and without the knowledge of his family, he urged her to leave her philandering spouse and pursued her relentlessly.  Fanny eventually divorced Osbourne and she and Stevenson wed in San Francisco in May of 1880.  For years, the couple searched in vain for a place to settle that would be conducive to Robert's health.  In 1890, they finally purchased a large estate in Upolu, one of the Samoan Islands in the South Pacific.

Below is s photo of Stevenson's home in Vailima, Samoa, showing him on the veranda. 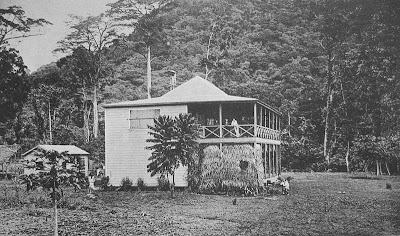 * Robert Louis Stevenson's stepdaughter Isobel (known as Belle) became a successful playwright. She died in 1953.  His stepson, Lloyd Osbourne, was an novelist who died in California on May 22, 1947 at the age of 79.

* Although Stevenson did not remain in the family profession, he remained deeply affected by lighthouses as is evidenced by the following poem he wrote.

The Light-Keeper
by Robert Louis Stevenson

The brilliant kernel of the night,
The flaming lightroom circles me:
I sit within a blaze of light

Held high above the dusky sea.
Far off the surf doth break and roar
Along bleak miles of moonlit shore,

Where through the tides the tumbling wave
Falls in an avalanche of foam
And drives its churned waters home
Up many an undercliff and cave. 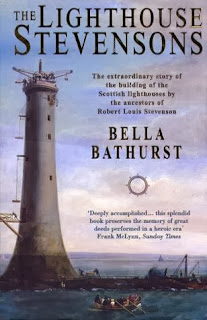