Rob Ford: Should he resign? 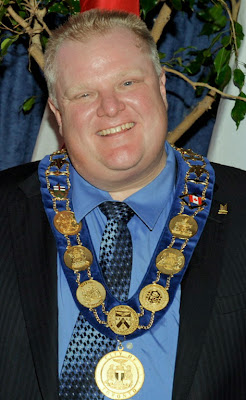 Rob Ford's politics are repugnant to me.  I've made no secret of my distaste for Ford's ideas.  I abhor his ultra-conservative ideology and his good ol' boy approach.  Yet, as much as I wish he weren't Toronto's mayor, the man was democratically elected by the people of this city. Although I disagree with almost everything he says and does, I have never wanted him removed from office unfairly. My hope has been that he would be voted out of office in next year's municipal election.

Now, however, I think Mayor Ford has crossed the line.  Given yesterday's extraordinary events, he should resign or at least take a leave of absence until he sorts out his problems.  It appears that the mayor is in need of professional help and I am not the first person to express those sentiments.  Even though Ford is in denial, he has shown many of the signs of someone with a substance abuse problem.  Toronto is sorely in need of leadership and Ford is incapable of providing it.  His antics have become a distraction, preventing this great city from moving forward.

Yesterday was a Halloween to remember (or forget) for Canada's largest city.  Toronto is receiving world-wide attention for all the wrong reasons.  Rob Ford has simply become an embarrassment and a liability to the city he professes to love and wishes to serve.  Unfortunately, the mayor has no intention of leaving office and claims that there is no reason for him to resign.  He acts as if it's business as usual  and that all the dirt can be swept under a rug.  It can't, as Mr. Ford will eventually discover.  The chickens will come home to roost and he will be held accountable for his behaviour - if not by the law then by the electorate.

Yesterday, Toronto police Chief Bill Blair confirmed that Mayor Ford has been under police surveillance for some time.  The Chief also revealed that the infamous video tape in which Ford appears to be smoking crack cocaine and allegedly spouting racist and homophobic remarks, exists and that the police have it in their possession.

Blair stated that Alexander "Sandro" Lisi,  Mayor Ford's friend and sometime driver, was charged with extortion related to the video.  Lisi, 45, is an alleged drug dealer. According to police documents, Ford and Lisi had more than 100 seemingly clandestine meetings.  Police surveillance succeeded in capturing the two men with a mysterious package of which the contents remain unknown - for now.

None of this will change the attitude of Ford's loyalists, they will stand by their man through thick and thin.  It doesn't matter that he has lied to them and to the other citizens of Toronto.  As Toronto Star columnist Royson James put it, "A hardcore subset of residents, dubbed Ford Nation, care only that Ford is intent on keeping taxes down and care nothing about his moral compass."

In the eyes of Ford Nation, the mayor is quite a guy.  He arm wrestles with Hulk Hogan and, oh yes, he hosts great barbecues.  Don't forget, by golly, that he's going to ensure that the Scarborough subway is built. Just don't ask how it's going to be done without raising taxes.  No! No! No!  Don't go there! Leave the mayor alone. Rob's a regular guy, not some aloof intellectual. He's not one of those snooty downtown elites. You won't catch him riding a bicycle or reading Canadian literature.

Ford Nation believes that the media has been hounding their man, especially the Toronto Star. Although Mayor Ford has nothing but disdain for the Star, the paper's investigative reporters deserve high praise for bringing the story of the "crack cocaine" video to light.  It was due to their diligent work that the police investigation into Ford's activities was undertaken.  Accused of having a vendetta against Mayor Ford, the news organization went before the Ontario Press Council and stated its case calmly and clearly. Yesterday, the paper was vindicated.

Sadly, Toronto's chief magistrate is his own worst enemy.  It's about time he took responsibility for his own actions and stopped blaming the media for all his woes.  Mayor Ford should note that all four daily newspapers have called for his resignation, including the Ford friendly Toronto Sun. Thank goodness for a free media.  Without it, how would people learn the truth about their elected representatives?