All About Easter Lilies 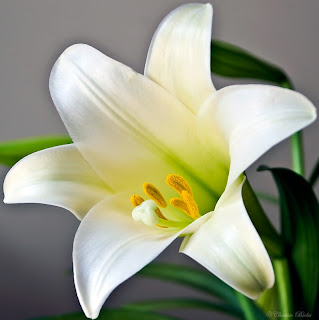 I have a great fondness for Easter Lilies and I get them every Easter. On this Easter Sunday, Number 16 presents some facts about this beautiful symbol of the season.  Their white, trumpet-shaped flowers represent hope and regeneration.

*  Easter Lilies are native to the Ryukyu Islands of southern Japan.  They were discovered by famed plant explorer Carl Peter Thunberg and delivered to England in 1819.  Missionaries and sailors brought the lilies to Bermuda in 1853, hence the name Bermuda lily,  A virus destroyed the crop in 1898 and production moved to Japan.

*  Before the attack on Pearl Harbor in 1941, most of the Easter Lily bulbs were imported from Japan.

* A World War I soldier named Louis Houghton has been given credit for starting production of Easter Lilies in the United States.  Houghton carried a suitcase of lily bulbs with him to the southern coast of Oregon in 1919.  He gave them to friends when the supply was cut off after the attack on Pearl Harbor. The area along the California-Oregon boarder is now the "Easter Lily Capital of the World" and produces the vast majority of the bulbs grown in the world.