The Monster Mash: A Halloween Tradition 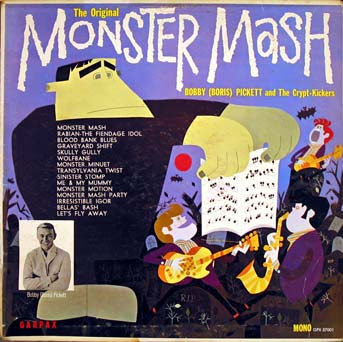 I was working in the lab, late one night
When my eyes beheld an eerie sight
For my monster from his slab, began to rise
And suddenly to my surprise

From my laboratory in the castle east
To the master bedroom, where the vampires feast
The ghouls all came from their humble abodes
To get a jolt from my electrodes

The zombies were having fun, the party had just begun
The guests included Wolf Man, Dracula and his son

The scene was rockin', all were digging the sounds
Igor on chains, backed by his baying hounds
The coffin-bangers were about to arrive
With their vocal group, "The Crypt-Kicker Five"

Out from his coffin, Drac's voice did ring
Seems he was troubled by just one thing
He opened the lid and shook his fist
And said, "Whatever happened to my Transylvania twist?"

Now everything's cool, Drac's a part of the band
And my monster mash is the hit of the land
For you, the living, this mash was meant too
When you get to my door, tell them Boris sent you


"The Monster Mash" was Bobby "Boris" Pickett and The Crypt-Kickers' incredibly successful novelty song, perhaps the most successful one ever.  For the past 50 years, this 1962 chart topper has been played every year on Halloween.  It's hard to believe that we've been doing the "Monster Mash" for  half a century.

Bob Pickett, the man behind "The Monster Mash," was a nightclub entertainer who performed with a band called The Cordials.  He composed his famous song along with his friend Lenny Capizzi.  Both men were horror fans and Pickett enjoyed doing imitations of actor Boris Karloff, the portrayer of Frankenstein.  The song is a parody of the dance crazes at the time such as the Twist and the Mashed Potato.  In fact, the "Mash" in the title comes from the Mashed Potato dance craze.  There is also a reference to the Transylvania Twist in which Bobby does a Bela Lugosi vampire impression.

"Monster Mash" was released as a single on the Garpax Records label in August of 1962.  By October 20th, with Halloween approaching, it reached Number 1 on the Billboard Hot 100 chart.  It's interesting to note that the song was actually banned in Britain by the BBC because it was deemed offensive by some.  It's also noteworthy that "Monster Mash" made the Billboard Hot 100 twice more, in August of 1970 and in May of 1972.  It finally became a hit in Britain in 1973.

It is not entirely accurate to describe "The Monster Mash" as a one-hit wonder for Bobby "Boris" Pickett.  He made the charts with two other songs - "Monsters' Holiday" in 1962 and "Graduation Day" in 1963.  Yet he never again had a recording as popular as "Monster Mash"  Through the years, it has sold over four million copies and has been covered by the Beach Boys and Sha Na Na.  Boris Karloff himself even performed the song on October 30, 1965 on the then-trendy television music show Shindig.  Bobby once said, "I haven't made millions but I have been paying the rent for years with this one song." 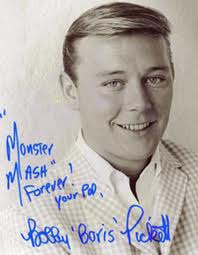 Born Robert George Pickett in Somerville, Massachusetts on February 11, 1938, Bobby was the son of a theatre manager.  As a child, he watched Boris Karloff films in his father's cinema and began to impersonate Karloff.  He served in Korea and spent three years there as part of the Signal Corps.  After his discharge from the army in 1959, Bobby decided to move to California to study acting and appear in television and films.  In 1960, he arrived in Los Angeles where he drove cabs and auditioned for commercials.  Here's how Bobby described his early days in L.A. and how he linked up with his "Monster Mash" collaborator, Lenny Capizzi, in a 2002 Story of the Stars interview with Gary James.

I got an agent after many, many months and after 2 weeks of being with him he died of a heart attack. So I was in trouble as an actor. I wasn't getting out there. What was going on was that Larry Capizzi and his brother Billy had grown up in Somerville, Massachusetts in the same neighborhood as me, and they had shown up in Hollywood at this time with two other Italian boys Ronnie Deltorto and Lou Toscano.

They were gonna start a singing group called The Cordials and they asked me if I wanted to join. We started singing around Los Angeles, literally for our supper. There was an Italian restaurant called Alvu Turnos and we sang for spaghetti dinners on Friday Nights. This is how 'Monster Mash' came about.

The Cordials performed mostly cover versions, including a song called "Little Darlin'" that had been recorded by The Diamonds.  Bobby asked Lenny if he could do his Boris Karloff impression in the part of the tune where the baritone sings.  The Karloff impression went over really well with the audience and Lenny suggested that they should make a novelty record.  In May of 1962, they composed "Monster Mash" and tape recorded it.  They then brought the tape to Gary Paxton, who was lead singer of The Hollywood Argyles, who had had a hit with "Alley Oop"  in 1960.  Paxton, one of the hottest producers in Hollywood at the time, agreed to produce their record.  They recorded the song with many of the sound effects done in  the studio.  Paxton and three studio musicians were credited as the Crypt-Kickers.  Bobby thought "a few Boris Karloff freaks" might enjoy "Monster Mash," but within eight weeks, it was a Number 1 hit.

Bobby "Boris" Pickett passed away on April 25, 2007 in Los Angeles, California. He was 69 years old and he died from complications from leukemia.  His home town has never forgotten him.  On Sunday, October 23, Somerville held a Monster Mashed Up DJ competition in his honour.  According to a headline in The Somerville News, there was a $100 grand prize for "the best mashup of the Halloween classic 'Monster Mash.'"  In addition to the DJ contest, the day's events included a children's parade, a costume competition, a craft fair and an Oktoberfest sponsored by local businesses.  A sizable turnout took part in the activities despite the dreary weather.

To watch a "Monster Mash" video, click on the link below. 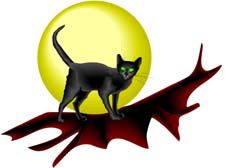 A VERY HAPPY HALLOWEEN FROM NUMBER 16!!!

To read my Halloween story titled The Eerie Mrs. Healy, please click on the FICTION tab above. 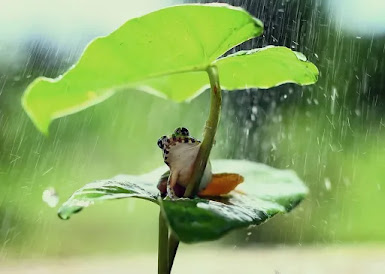