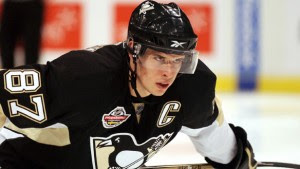 Sidney Crosby is a mere 24 years old, but it seems as if he has played in the NHL for ages.  Sid the Kid was born August 7, 1987 (that's why he wears number 87 on his sweater) in Halifax, Nova Scotia.  and grew up in nearby Cole Harbour.

Crosby has achieved much in the sport of hockey and as an athlete.  He already has a Stanley Cup ring and an Olympic gold medal.  Since he launched his NHL career at the age of 18 in 2005, The Kid has scored 215 goals in 412 games for the Pittsburgh Penguins.

Sid was awarded the Art Ross Trophy, the Hart Memorial Trophy and the Lester B. Pearson Trophy for 2006-07 and was named captain of the Penguins on May 31, 2007.  He became the youngest team captain in NHL history at 19 years, 9 months.  When he led the Penguins to a  Stanley Cup victory in 2009, Crosby earned the distinction of being the youngest captain ever to win the championship.  He was just 21 years old when he hoisted hockey's holy grail.

In comparison, Bobby Orr was 22 when he won a Stanley Cup ring with the Boston Bruins in 1970.  Wayne Gretzky was an old man of 23 when he won his first Stanley Cup with the Edmonton Oilers in 1984.  The Great One was captain of the Oilers when they won their first championship and his playing days lasted much longer than Orr's.

Bobby Orr was just 30 years old in 1978 when he was forced to relinquish his hockey career.  Due to repeated injuries to his left knee, Orr was unable to continue.  Bobby played six games of the 1978-79 season for the Chicago Black Hawks before informing them he was no longer fit to play.

Wayne Gretzky retired from the game in 1999.   He was 38 years old when he played his final NHL game in a New York Rangers uniform at Madison Square Garden.  Gretzky told sports journalist Scott Morrison that his last game in New York was "my greatest day in hockey."  He said, "Everything about the sport of hockey as a kid, driving to practice with mom (Phyllis) and dad (Walter), driving to the game with mom and dad, looking at the stands and seeing your mom and dad and your friends, that all came together in that last game in New York."

At the age of 24, Sidney Crosby is now at a crossroads in his life and in his career.  In February of 2010 he thrilled Canadians by scoring the winning goal in the gold medal game between Team Canada and Team USA at the Winter Olympics in Vancouver.  There was great celebration across the land as the pride of Cole Harbour led his country to Olympic gold.  On New Year's Day 2011, however, Sidney was hit by David Steckel of the Washington Capitals during the second period of the NHL Winter Classic outdoor game at Pittsburgh's Heinz Field.  He left the ice in severe pain.

To watch a video of Steckel's blindside hit on Sidney Crosby, click on the link below.

Sidney participated in Pittsburgh's next game on January 5, 2011, but again left the ice after his head was pounded into the boards following a hit by the Tampa Bay Lightning's Victor Hedman.  He has not played a game since and has suffered from post-concussion syndrome.

Perhaps Sidney Crosby has achieved too much too soon.  If he were never to play another NHL game, what would he miss out on?  He already has a Stanley Cup ring and an Olympic gold medal?  He's financially set for life.  Athletes, however, do not think that way.  They continually set new goals for themselves and they want to compete.  Their competitive nature is such that they will place their health in jeopardy.

Sidney Crosby has said that he wants to return to the ice.  His agent, Pat Brisson of CAA Sports, has adamantly denied speculation that Croby has suffered a setback in his recovery.  Pittsburgh general manager Ray Shero has told reporters that Sidney "has progressed really well this summer" and that the centre is expected to return to Pittsburgh for evaluation prior to the opening of the team's training camp on September 17th.  It remains uncertain, however, whether Sid will be in the lineup when the Penguins open their regular season in Vancouver on Oct. 6th.

The harsh truth is that Sidney Crosby will probably never be the same again.  He will always fear getting hit and experiencing another concussion.  I am certain, though, that he will make every attempt to resume his career even though it will be impossible to dismiss what has happened.  It would be wiser for Sidney to retire now, but he won't do it.  His heart won't let him because his heart is in the game.  It is also true that the NHL has too much invested in the young man to just let him walk away from professional hockey too easily.  He is one of the league's premiere players, a bona fide star.  Yet, the NHL has not done enough to protect the Sidney Crosby's of the game.

David Steckel did not receive a penalty or a suspension for his blindside hit on Sidney Crosby.  Why not?  As Crosby himself said, "I know it's a fast game and I think everybody understands it's a fast game - I've been hit a thousand times - but when you get hit like that there's nothing you can do.  Those are things that hopefully (the NHL) pays more attention to.  It's easy to say that being in this situation, but those two hits - looking back I can't say I should have done something different or had my head down.  I wouldn't change anything."

The NHL will only have itself to blame if Sidney Crosby's career is cut short or if he suffers another concussion.  It should have imposed very severe penalties on blindside hits a long time ago.  Perhaps if it had, Steckel would have thought twice before blindsiding Sidney Crosby.  For shame, NHL!