The Legend of Bill Barilko

Bill Barilko disappeared that summer. He was on a fishing trip.
The last goal he ever scored won the Leafs the cup
They didn’t win another until 1962, the year he was discovered.
I stole this from a hockey card I keep tucked up under
My fifty mission cap

Note: A fifty mission cap is a World War II style U.S. Army officer`s cap.  It is a cloth cap with a visor. 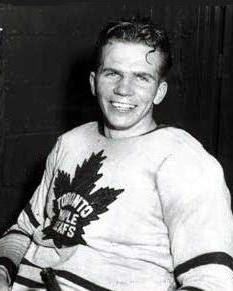 Today is a momentous anniversary in the history of the Toronto Maple Leafs.  Since the Leafs are out of the playoffs again this spring, let us take comfort in the glory days of this storied franchise.  Let`s go back 60 years to April 21, 1951.  That was the day that Bill Barilko scored the winning goal against the Leafs`arch-rivals, the Montreal Canadiens, in Game 5 of the Stanley Cup finals.  At 2:53 of the first overtime, Barilko fired a shot over the shoulder of Montreal goalie Gerry McNeil.  As he celebrated a Stanley Cup victory with his teammates, Bill had no way of knowng that he would never score another NHL goal.

Barilko`s overtime goal was immortalized by the popular Canadian band The Tragically Hip in the song "Fifty Mission Cap" from their 1992 album Fully Completely.  The group`s lead singer, Gord Downie, stated "There must be something in Bill Barilko that people relate to.  We are all united in tragedy."

To watch a video of The Tragically Hip singing "50 Mission Cap," click on the link below.


http://www.mp3rocket.com/mp3/-1_00/Grievous-Angels-Bill-Barilko-Song.htm
William "Bill" Barilko was born in the mining town of Timmins, Ontario on March 25, 1927.  He was the second of three children of Eastern Europeean immigrants to Canada.  He had an older brother, Alex, and a sister, Anne.  His father, Steve Barilko, found work as a cook in various mining camps.  Bill did not do well academically and he quit school at the age of 15.  If he hadn't become a hockey player, he too would probably would have found employment in the mines.

As a young boy, Bill was origninally a goaltender.  He could not skate fast enough to play centre and lacked the abillity to skate backward as a defenceman.  His childhood idol was Leafs goaltending great Turk Broda.  Although Barilko became quite proficient as a goalie, he was transformed into a position player for practical reasons.  He wore thick eyeglasses and was more likely to break them playing goal.  His parents could not afford to continually replace his glasses.

In February of 1947, young Bill Barilko was called up from the Hollywood Wolves of the Pacific Coast Hockey League to the Toronto Maple Leafs. The truth is that Bill did not have a Hall of Fame career in the National Hockey League. The defenceman was definitely not a prolific scorer and his statistics are not particularly impressive.

During his five seasons with the Leafs, he scored only 26 goals. Yet, as author Kevin Shea points out in his 2004 book Barilko – Without a Trace, Barilko “played an integral role” in four Stanley Cup championships won by his team (1947, 1948, 1949 and 1951).  In a 1967 interview on Hockey Night in Canada, Turk Broda was asked to identify the best defenceman ever to play in front of him.  He named Bill Barilko.

Just over four months after scoring his celebrated goal, 24-year-old Bill Barilko embarked on an ill-fated journey that would cost him his life. On the morning of August 24, 1951, Bill accompanied his friend and dentist, Henry Hudson, as they set out for a weekend fishing trip in Seal River, Quebec (a remote river on the east side of James Bay). The single-engine aircraft (Dr. Hudson’s Fairchild 24 floatplane) never returned. On the trip home, it just disappeared without a trace. A massive search involving several Royal Canadian Air Force planes failed to locate the two men.

After Bill Barilko`s untimely disappearance, the fortunes of the Toronto Maples Leafs changed dramatically. While the Montreal Canadiens and the Detroit Red Wings became the dominant teams of the 1950s, the Leafs struggled for much of the remainder of the decade. In the 1957-58 season, Toronto even endured the humiliation of a last place finish.

After an 11-year dry spell, the Leafs finally won the Stanley Cup again, on April 22, 1962. By an uncanny coincidence, the remains of Bill Barilko and Dr. Hudson were discovered on June 6 of that very same year. Helicopter pilot Ron Boyd located the two men in thick bush about 160 km. (100 miles) north of Cochrane, Ontario. Their skeletal bodies were still strapped into their plane`s cockpit. The cause of the crash was considered to be a combination of poor weather conditions, a lack of piloting experience and overloaded cargo.

The Toronto Maple Leafs left a sign at the crash site. in honour of Bill Barilko and Dr. Henry Hudson. It reads ``At this location, August 26, 1951, hockey player Bill Barilko and dentist Henry Hudson lost their lives. Rest in peace.`` On June 15, 1962, with family and friends in attendance, Bill`s remains were finally laid to rest in his hometown of Timmins.

The Maple Leafs officially retired Barilko`s Number 5 and Ace Bailey`s Number 6 on October 17, 1992. Bill`s sister, Anne Klisanich, helped hoist her brother`s number 5 to the rafters at Maple Leaf Gardens. By the way, Barilko only wore Number 5 on his sweater during the 1950-51 season. When he debuted with the Leafs, he was assigned Number 21. He wore Number 19 for the 1948-49 and 1949-50 seasons.

To watch a video tribute to Bill Barilko, click on the link below.