The rally and its consequences 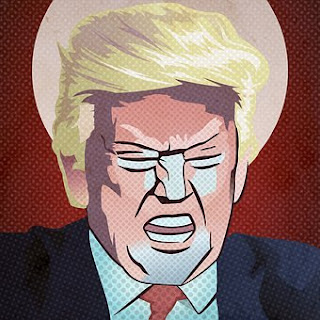 Have you noticed that Donald Trump has become so unhinged these days that he has begun to sound like Richard Nixon?  He has started using Nixonian expressions such as "law and order president" and "silent majority."  We all know what happened to Tricky Dick.  Mr. Law and Order covered up some Watergate-related crimes and he was forced to resign.  However, as bad as Nixon was, I still consider him a far better president than Trump.

Donald Trump must be in a foul mood right now.  He held a party and it was not well-attended; but why should it have been?  How many people are so stark-raving mad, so addle-brained, that they would risk their lives to cheer on a president who doesn't really care about their well-being?  Case in point: As a condition of registering for Saturday's campaign rally in Tulsa, Oklahoma, Trump  supporters had to agree not to take legal action if they were to come down with the COVID virus.  The red flags were there, but some people just didn't want to see them.

Why would anyone support a man who has displayed little respect for human life, a man who has placed himself and his desires above everything else?  Who would die for he sake of Donald Trump's re-election other then some extreme right-wing zealots.  There will be deaths, however.  Even though attendance at Trump's hate-filled rally was much lower than organizers had expected, many people will die or fall ill.  There is no other way to say it: Donald J. Trump and his Republican cohorts have blood on their hands.

I'm not being overly dramatic or hyperbolic. That is the indisputable truth.  That is the reality for those who were foolish enough to attend a rally in a 19,000 seat arena in the midst of a pandemic. Fortunately, Tulsa's fire marshal told NBC News that only 6,200 people filled the general admissions sections of the BOK Center.  Still, 6,200 people can really spread a virus.  That's why the rally should never have been allowed to take place.  Health and safety are more important than pleasing the president.

Are die-hard Trump supporters as brainwashed as the followers of Jim Jones, who committed mass suicide in Jonestown, Guyana in 1978?  Are they willing to jeopardize their lives for Donald Trump because they equate him with "America."  It's insanity.  It's also extremely tragic.  The people who attended that event will selfishly spread the virus to other human beings, many of whom have no connection to Trump or the rally. By the way, six Trump rally staffers have already tested positive for the COVID-19 virus.

In Tulsa, Donald Trump declared that he had instructed his administration to slow down testing because too many cases had been uncovered.  A White House advisor later said that Trump was kidding around.  I think that he was being series, but even if he were just joking, a president should not make light of  COVID-19.  His words were completely irresponsible, especially because some people take them to heart.  They listen to him.

If I lived in Tulsa or surrounding area,, I'd high-tail it out of Dodge as quickly as possible.  Tulsa can really be compared to Dodge City because, ever since a  "constitutional carry" gun law took effect in 2019, some Oklahomans have been allowed to carry a firearm in public without a licence.  In fact, most Oklahomans 21 and older can now carry concealed or unconcealed firearms without having undergone background checks or training requirements, except for undocumented immigrants or those convicted of a crime.  To me, that is craziness of the highest degree.  It's comparable to being permitted to drive a car without driver education or a driver's licence.  It can only lead to unnecessary deaths an bloodshed.

I believe that that most Americans are decent enough to be disgusted and repulsed by the behaviour of their president.  The majority want their country to return to sanity and are appalled by what three years and five months of Donald Trump has done to America and its standing in the world.  There is only one chance left to rectify this situation before it's too late.  There is only one opportunity to save the United States from four more years of Trump and further descent into darkness.  That last chance will be on November 3, 2020, provided this president allows a free and fair election, and provided he accepts the results.  That's why it's incumbent upon Americans to make sure they vote.