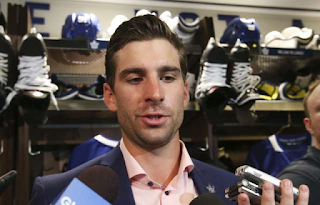 “I just felt like my heart was in two places: where I’m from, and a place where I’ve been for a long time and helped me become the man I am today. My gut was tearing apart, my heart was tearing apart figuring out what I wanted to do. And yesterday was one heck of a day… I was walking up and down the pool at my house trying to get a sense of what I wanted to do and the path I wanted to take. I just felt this opportunity was just so rare.”

- John Tavares, on his decision to leave the New York Islanders for a 7-year deal with the Toronto Maple Leafs
Press Conference, July 1, 2018

Welcome back, John Tavares!  Toronto Maple Leaf fans are delighted that you've made the decision to come home to the Greater Toronto Area (GTA).   You're a local boy, born in Mississauga and raised in Oakville. The Leafs were your favourite childhood team. Now you have an opportunity to lead them to their first Stanley Cup victory in over 51 years.  It's the chance of a lifetime, but it's also a monumental challenge.

Leaf fans have endured years of frustration and disappointment.  The team was grossly mismanaged under the ownership of Harold E. Ballard.  In 1979, at the lowest point in Ballard's reign, coach Roger Neilson was fired in the middle of the season with no announcement to the press.  In fact, Neilson was forced to inform the media of his own dismissal.  Leaf fans were in an uproar and Ballard was unable to quickly find a suitable replacement.  So, he reinstated Neilson two days later.  However, in a foolish attempt to surprise the fans with a mystery coach, Harold made a strange request.  He asked Neilson to wear a paper bag over his head as he entered the arena for his first game back. The bag would be removed when he arrived at the bench.  Mercifully, Roger refused to do so, but he still finished the season with the Maple Leafs.  He was fired again the following April.

Then there was the debacle in Game 6 of the 1993 Western Conference Final.  In the words of hockey writer Luke Fox, that game "defined misery for a generation of Leaf fans.  Referee Kerry Fraser failed to call a penalty on Wayne Gretzky's for high sticking Leafs star Doug Gilmour.  The Los Angeles Kings went on to win the game and the seventh and deciding game.  Canadian hockey fans were deprived of a glorious Stanley Cup final between the Leafs and the Montreal Canadiens.

More recently, there was the Leafs' meltdown in Game 7 of their 2013 playoff series with the Boston Bruins.  The Leafs just collapsed and relinquished a 4-1 lead with 11 minutes to play in the third period.  They allowed the Bruins to come back and win the game 5-4 (and the series) in overtime. Here's how Chris Johnston described the feeling on Sportsnet,com for Maple Leaf fans: "To lose a game you led by three goals would be crushing if it happened in February; to do it in Game 7 of a playoff series is nothing short of soul-destroying."

Something had to be done to right the ship.  In the spring of 2014, Brendan Shanahan was officially announced as the Leafs' president and he developed a plan for the Leafs.  In May of 2015, Mike Babcock took over as head coach.  In July of 2015, Lou Lamoriello was added to the mix as general manager.  Fans were told to be patient, that there would be pain before victory.  So Torontonians accepted a season of finishing 30tth in a 30-team league with nary a complaint.  Their reward was the acquisition of prized centre Auston Matthews, whom they acquired in the draft lottery.  Lamoriello has since left the Leafs and accepted the GM position with the New York Islanders.  He has been replaced by the young, up-and-coming Kyle Dubas, who was instrumental in persuading you to sign with the Leafs.

It appears that all the pieces of the puzzle are finally coming together for the Maple Leafs.  Nothing is guaranteed, though, and we could still be disappointed.  Nevertheless, there are valid reasons for hope and optimism.

John, you were born on September 20, 1990.  You are far too young to remember the sordid history of the Ballard era and you were just a toddler when the Gretzky/Gilmour incident occurred. You came into this world 33 years before the Leafs last won the Stanley Cup in May of 1967. You've probably only seen grainy photographs and old video clips of the event.inning the Holy Grail of Hockey was a lot easier back then,  There were only six teams in the league and the Leafs routinely draped themselves in glory. Thy won four Cups during the 1960s., but they haven't even played in the Stanley Cup Final since then.

You posted a yourself as a young boy with a Leafs blanket on your bed as you slept.  However, you did not sign with the Leafs merely for sentimental reasons.  If that had been your only consideration, you would have remained with the New York Islanders. You spent nine season with that team and you many great memories. 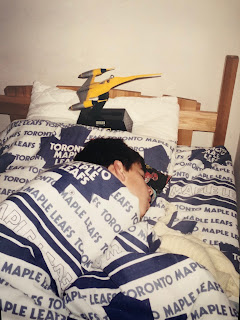 You did not sign with the Leafs because they offered you the most money either, or the longest contract.  The Islanders reportedly offered you $11.25 million annually, compared to the Leafs' $77 million and they were the only team to present you with an eight year deal, compared to the seven-year contract you accepted with the Leafs.  You must genuinely believe that this team is headed in the right direction and that you have the best chance of winning it all in Toronto than in the other cities you could have chosen.

The Leafs are coming off a 105-point season.  They they have a core of young, talented players such as Auston Matthews, Mitch Marner and William Nylander.  Their future looks bright because their American Hockey League farm club, the Toronto Marlies, won the Calder Cup recently.  Those factors undoubtedly influenced your decision to sign with the Leafs.

Here's what you told the press on Canada Day:

"It really took the right opportunity and fit.  I thought the timing couldn't be beat and certainly being from here, and I think that where this team is at and how good and young their core players are., and obviously seeing in recent weeks how the Marlies did and what the future holds, with much more talent and the job they've done here, it was just hard to turn down.  It was hard to turn down this opportunity."

You haven't been designated captain of the Toronto Maple Leafs yet, but I'm sure you will be.  Who else is better qualified to wear the "C" on his chest than you?  You have the right leadership qualities and lots of experience.  After all, you were captain of the New York Islanders for over five years and you don't exactly seem averse to the idea of assuming the captaincy of Toronto's storied hockey franchise.  At your July 1 press conference, here's what you said when broached about the subject.

“That never came up in our conversations over this past week. They definitely expressed me coming in and wanting to use my experiences as a captain and things they believe I can use as leadership qualities.”

On a sweltering summer day in Toronto, we Leaf fans can hardly be forgiven if we allow our imaginations to run amuck.  We can't be faulted for daydreaming about you hoisting Lord Stanley's Jug in a parade along Yonge Street.   can provide you with a better feeling than that.  No city is more hungry for a Stanley Cup than Toronto.  You can own this town, Mr. Travares.

People in this city are already wearing Leaf sweaters with Tavares' number 91 on them. We can dream of Stanley Cup glory, can't we?