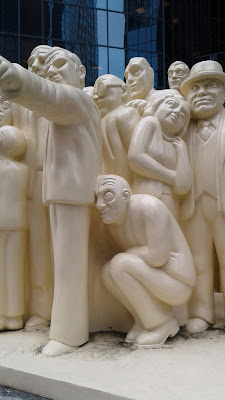 On March 27th of this year, I attended an exhibition game between the Toronto Blue Jays and the St. Louis Cardinals at Montreal's Olympic Stadium.  The next day, while strolling along McGill College Esplanade, I came across a sculpture that immediately intrigued me.  It is located in front of the 20-storey Banque Nationale de Paris (BNP) Paribus Canada office complex.

The name of the sculpture is The Illuminated Crowd and I was not surprised to learn that it is one of the most photographed sculptures in Montreal.  This thought-provoking and controversial work was created by Raymond Mason in 1985.  Mason was a native of Birmingham, England who immigrated to France in 1946,  He lived in Paris until his death in 2010.  In 1980, The Louis Dreyfus Property Group approached him with the idea of designing a sculpture for the future plaza at 1981 avenue McGill College.  The artist was already working on The Illuminated Crowd and he chose a revised version of the theme for the Montreal setting.

From September to November 1985, prior to being shipped to Canada,, the sculpture was exhibited at the National Museum of Modern Art at the Centre Georges Pompidou in Paris.  It depicts a crowd of 65 people of various ages and racial backgrounds.and it illustrates a rather dark side of humanity.  The crowd is gathered tightly together.  The figures in the first row look off into the distance.  Behind them, however, the mood worsens.  It gradually deteriorates as the people display a gamut of emotions including fear, hatred, lust, sadness and sheer terror.

The Illuminated Crowd is ochre in colour against the background of the blue BNP building.  It is a large sculpture - 8.6 metres long by 3.2 metres wide.  Its depiction of a mob of humanity is disturbing and provocative.  That is why it is such a fascinating work of art. 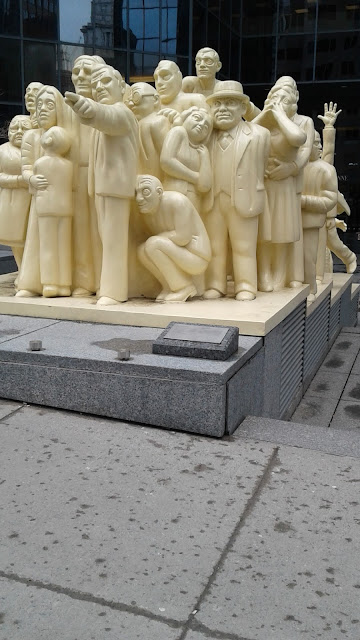 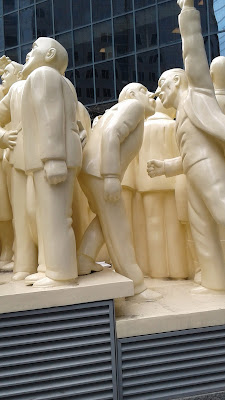 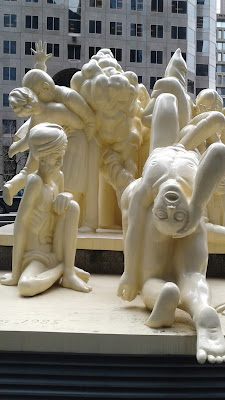 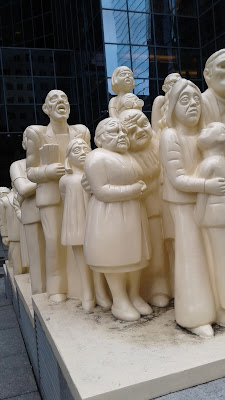 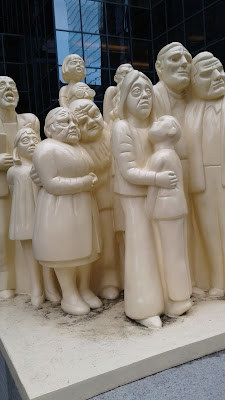 At the base of the sculpture, there is a plaque with the following words:

"A crowd has gathered, facing the light, an illumination brought about by fire, an event, an ideology - or an ideal.  The strong light casts shadows, and as the light moves toward the back and diminishes, the mood degenerates; rowdiness, disorder and violence occur, showing the fragile nature of man.  Illumination, hope, involvement, hilarity, irritation, fear, illness, violence,  murder and death - the flow of man's emotion through space." 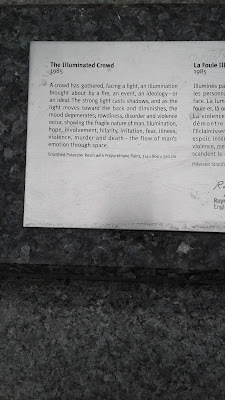