Easter: Marry Magdalene: Her image from the Bible and Renaissance art to Jesus Christ Superstar and The Da Vinci Code

Today is Easter Sunday and I would like to share some quotations with you.  This will be followed by a profile of Mary Magdalene.

- Phillips Brooks
From An Easter Carol

Awake, thou wintry earth -
Fling off thy sadness!
Fair vernal flowers, laugh forth
Your ancient gladness!

- Thomas Blackburn
From An Easter Hymn


IN SEARCH OF MARY MAGDALENE: Was she a fallen woman who became a devoted follower of Christ? 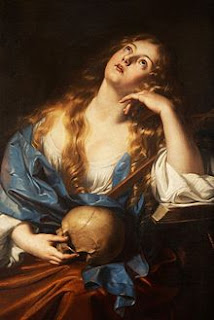 In many ways, Mary Magdalene is elusive and mysterious.  She is not clearly identified in Scripture and very little is known about her life other than what appears in the New Testament and later Gospels which are not included in the Bible.  One source of confusion is the number of women called "Mary" in the Gospels ("Mary" is derived from the Hebrew name "Miryam" or "Miriam").

It is usually assumed that "Mary Magdalene" means "Mary from Magdala."  Although no specific location of Mary's birthplace is mentioned in the Bible, many Christian academics believe she came from a place the Talmud calls Magdala Nunayya ("Magdala of the fishes"), on the shore of the Sea of Galilee.  She is thought to be of Jewish descent, and all four canonical Gospels present her as a follower of Jesus who travelled with him and his disciples.

Then followed a time in which he went on journeying from one city or village to another, preaching and spreading the good news of God's Kingdom.  With him were the twelve apostles and certain women, whom he had freed from evil spurts and from sicknesses, Mary, who is called Magdalen, who had seven devils cast our of her, and Joanna, the wife of Chusa, Harod's steward and Susanna, and many others, who ministered to him with the means they had.


But he had risen again, at dawn on the first day of the week, and showed himself first of all to Mary Magdalen, the woman out of whom he had cast out seven devils.  She went and gave the news to those who had been of his company, where they mourned and wept; and they, when they were told that he was alive and that she had seen him, could not believe it.


Mary Magdalene has been characterized as a repentant sinner largely as the result of a homily delivered by Pope Gregory 1 in 591.  Gregory lauded Mary for her devotion to Christ, but referred to her as the unnamed female sinner with perfume in Luke's Gospel (7:36-50) and as Mary of Bethany, sister of Martha and Lazarus.  The pope also made reference to Jesus cleansing Mary of the "seven demons," which he associated with the seven deadly sins, which include not only lust but pride and greed as well.

Centuries later, Jacques Lefèvre d'Étaples, a French theologian and humanist, challenged this version of Mary Magdalene.  In Da Maria Magdalena et triduo Chriisti disceptatio (1517), Lefèvre argued against the conflation of Mary the sister of Lazarus, Mary Magdalene and the anonymous penitent sinner who anointed Christ's feet in Luke's gospel.  He contended that they were different people and received much condemnation from French theologians.  However, in 1969 the General Roman Calendar put an end to the dispute about the composite Mary when it identified different dates for Mary Magdalene, Mary of Bethany and the anonymous sinner.


It is a myth that Mary Magdalene was a penitent prostitute, even though that image of her has persisted in Western tradition and theology.  Mary has long been portrayed as a fallen woman who repented,  Western medieval and Renaissance art pictured her in extravagant clothing or dressed immodestly in contrast to other women of the era.  Some paintings even depicted her nude, discreetly covered by long, blond hair, especially the works of Italian artist Titian (1488-1576).

This image of Mary has continued into more modern times. From the 18th century on, institutes that cared for prostitutes were called "Magdalenes."  In the 1970 rock opera Jesus Christ Superstar (music by Andrew Lloyd Webber, lyrics by Tim Rice), there is a song entitled "I Don't Know How to Love Him.," sung by Mary Magdalene.  Here are the lyrics:

It  has also been theorized that Jesus and Mary Magdalene were married.  In Dan Brown's bestselling 2003 novel, The Da Vinci Code, it is discovered that "The Church, in order to defend itself against the Magdalene's power, perpetuated her image as a whore and buried Christ's marriage to her, thereby defusing any potential claims that Christ had a surviving bloodline and was a mortal prophet."

According to Dorothy Ann Lee, Professor of New Testament, Trinity College, University of Divinity in Australia, "nowhere in the Gospels is Mary Magdalene associated either overtly of covertly with sexuality."  Although she is described as having had seven demons in Luke's Gospel, this description does not mean she was a prostitute.  This description, argues Professor Lee, does not refer to "unfettered sexuality."

In her 2018 essay in The Conversation, Lee states that exorcisms are common in the first three Gospels.  "Those suffering from demonic possession,," she writes, "are never described as sinful but rather are victims of external evils."  Today we would refer to them as illnesses such as epilepsy or mental illness. In other words, Lee concludes, "Magdalene has been the victim of a serious illness and Jesus has healed her."

What we do know is that the canonical Gospels of Matthew, Mark, Luke and John clearly place Mary at the crucifixion, burial and resurrection of Christ.  However, as Professor Lee points out, "the gospel references don't describe her personality, history or character."  There are very few direct quotes from her, nor any description of her temperament.

In the New Testament, there is no doubt as to Mary's devotion to Christ.  According to the Gospel of John (20:1), it was Mary Magdalene who came to the tomb of Jesus early Sunday morning and discovered that the stone was removed.  It was she to whom Jesus first appeared after his death.  Despite Mary's image in art and literature, there is no solid evidence in the Gospels (or anywhere else) that she was a prostitute or a repentant sinner.  We do know for certain that she was a dedicated and beloved disciple of Jesus.