Reflections on the anniversary of Martin Luther King's birth. 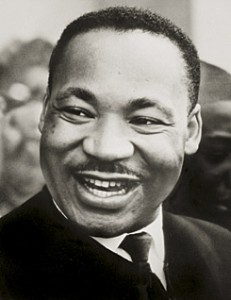 Today marks the 89th anniversary of the birth of Martin Luther King Jr., a man of grace and eloquence.  Dr. King was born in Atlanta, Georgia on January 15, 1929.  He was assassinated in Memphis, Tennessee on April 4, 1968, nearly 50 years ago.  Almost a  half century after King's death, his ideals are being challenged worldwide by extremists of the far right.  There is no doubt that we live in turbulent times.  Virulent anti-immigrant parties are spewing their hateful rhetoric throughout Europe and elsewhere.  The President of the United States is xenophobic, racist and misogynistic. Incidents of antisemitism and Islamophobia abound and they are being reported constantly in the media.

In the face of all this, we need to hear the voice of reason.  We need to be reminded of what Martin Luther stood for and of his struggle for civil rights.  An assassin took Dr. King's life, but no one can ever take way his dream.  His dream lives on in the hearts of all those who seek justice and equality.  His spirit lives on in all those who stand up  human rights.  His voice can be heard in the choir of those who sing out for freedom.  The beautiful words of King's  "I Have a Dream" speech continue to inspire and resonate.  That is why, to counter all the hateful and ugly rhetoric, I am posting an excerpt from King's speech, which he delivered from the Lincoln Memorial during the historic 1963 civil rights march on Washington D.C.  As the man himself would say., "We shall overcome."


"Let us not wallow in the valley of despair, I say to you today, my friends.

And so even though we face the difficulties of today and tomorrow, I still have a dream. It is a dream deeply rooted in the American dream.

I have a dream that one day this nation will rise up and live out the true meaning of its creed: "We hold these truths to be self-evident, that all men are created equal.

I have a dream that my four little children will one day live in a nation where they will not be judged by the color of their skin but by the content of their character.

I have a dream that one day, down in Alabama, with its vicious racists, with its governor having his lips dripping with the words of "interposition" and "nullification" -- one day right there in Alabama little black boys and black girls will be able to join hands with little white boys and white girls as sisters and brothers.