Judas Iscariot: Was the man who betrayed Christ a revolutionary? 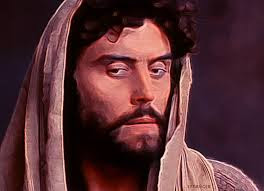 "Up until that moment of betrayal, Judas seems no better or worse than any of the other disciples.
But he has been defined by the worst thing he did.  What Judas did is not OK, but I think he holds up a very important mirror to our own human condition."

Judas Iscariot is notorious for his betrayal of Jesus Christ, but what else do we really know about the man and his motivations. Was he a greedy, mercenary human being who sold his soul for financial gain, or is there much more to the story?  This Easter season, I decided to delve into whatever is known about Judas and try to find some answers.

According to the Christian Bible, Judas was one of the twelve original apostles of Christ and he was the son of Simon of Queroth.  His surname, "Iscariot," may mean "Man from  Queroth, " a town many scholars believe to have been in the territory of Judea, based on a reference in the Book of Joshua.  That would mean make Judas an outsider, the only one of the Twelve from Judea. All the others were from Galilee, as was Jesus.

Encyclopaedia Britannica states that Judas' surname may be a variation of the Latin sicariou ("murderer"), rather than an indication of his family origin, the implication being that Judas may have belonged to a highly radical group of Jewish assassins - the Sicarii.  The Sicarri were a splinter group of Jewish Zealots who strongly opposed the Roman occupation of Judea.  Their aim was to expel the Romans and their supporters from the area and they were known for concealing scae (small daggers) in their cloaks.  They drew out their daggers to attack Romans and Hebrew Roman sympathizers in public places, then blended into the crowd to evade detection.

Some contemporary historians, however, have rejected the theory that Judas was a Siccarri.  They point out that Josephus, a first-century Romano-Jewish scholar and historian, in The War of the Hebrews, mentions the appearance of Sicarri as a new occurrence during the tenure of Felix (the chief financial officer of the province of Judea from 52 to 60 A.D.).  This was well after Judas' death (circa 30 A.D.).

According to Dr. Sean Martin, a biblical scholar at the Aquinas Institute in St. Louis, Missouri, "Iscariot sounds like sicarius, but it's not the same word,"  He points out that the Sicarii didn't reach their peak until the years after Jesus was crucified, making it improbable that Judas was one of them.

In the canonical Gospels, information about Judas is sketchy.  He is always presented last on the list of Apostles.  He was their treasurer, and according to the Gospel of John, a dishonest one.  In John 12:6, Judas is introduced as a thief,  He uses his trusted position to embezzle the resources of the disciples.

According to the Gospel of John, at the Last Supper, Jesus predicted that Judas would be his betrayer. (John 13:26).

"Jesus answered, 'It is the one to whom I will give this piece of bread when I have dipped it in the dish.  Then, dipping the piece of bread, he gave it to Judas Iscariot, son of Simon."

According to the Gospels of Matthew and Mark and Luke, Judas betrayed Jesus by identifying him with a public kiss.  In Mathew and Mark, the kiss occurs in a place identified as the Garden of Gethsemane. In Mark:14, Gethsemane is described as an olive grove.  Although Luke does not name the Garden of Gethsemane, he writes that Jesus went to the Mount of Olives, where the betrayal occurred.

John's Gospel, however, records that Jesus entered a garden near the Kidron Valley with his disciples. John does not name the garden, but says that Jesus and his disciples frequented the garden and that Judas knew it well.  In John's account, no kiss is mentioned, only that "Judas came, accompanied by the guard, and officers sent by the chief priests and Pharisees, with lanterns and torches and weapons."

Below is a photo of The Arrest of Christ (Kiss of Judas) (1304-06), a fresco by Giotto.  It is currently located in the Scrovegni Chapel in Padua, Italy. 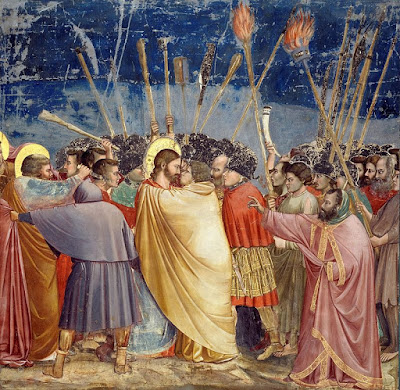 And he threw the pieces of silver into the temple sanctuary and departed; and he went away and hanged himself.  The chief priests took the pieces of silver and said, “It is not lawful to put them into the temple treasury, since it is the price of blood.”  And they conferred together and with the money bought the Potter’s Field as a burial place for strangers. (Matthew 25: 5-7).

Here is the account of Judas' death according to the Acts of the Apostles, written by St. Luke,

(Now this man acquired a field with the reward of his wickedness, and falling headlong he burst open in the middle and all his bowels gushed out. And it became known to all the inhabitants of Jerusalem, so that the field was called in their own language Akeldama, that is, Field of Blood.)  (Acts: 1: 18-19).

Below is a photo of what is believed to be the "Field of Blood."  It is located in Jerusalem and its soil is composted of rich, red clay.  Until the 19th century, it was used as a burial place for non-Jews. 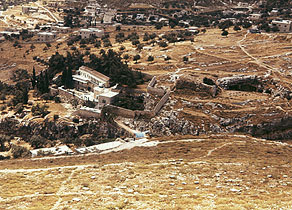 Some Biblical scholars argue that there is not contradiction between the two accounts of Judas' death. They contend that just because Luke writes that Judas fell headlong and burst open, doesn't mean that he died then.  He could have collapsed and split open after hanging himself.

Was Judas the traitor he has been made out to be?  Was he really a villain or was he misguided and misunderstood?  Some Church of England clerics have argued that he was misunderstood.  Reverend Kate Bentley, who has researched his life for a BBC documentary called In the Footsteps of Judas, was quoted in a March 16, 2016 article by Matt Payton in The Independent,  Rev. Bentley stated: "This is not to say ‘Oh Judas, he’s all right really’, what we are saying is perhaps there is something else to this character than that kiss and that betrayal.  I don’t think any of the other disciples were whiter than white - we just probably didn’t hear about it because they were all human and we are all a bit messed up."

The Right Reverend Nick Baines, Bishop of Leeds, views Judas as a staunch revolutionary whose goal was to help Jesus incite a popular uprising that would oppose Roman rule in Palestine.  In an interview with Radio Times, Bishop Baines admitted that "I feel a bit sorry for Judas."  "Judas had invested himself in the revolutionary leadership of Jesus of Nazareth … only to find himself let down, the bishop declared.  "Trying to force the hand of the Messiah didn’t work and, instead of provoking the ultimate uprising against Roman rule, the glorious leader simply let himself get nailed without resistance.  No wonder Judas got upset."

So, was Judas a radical who thought Jesus would assist him in liberating the Jewish people by ousting the Romans from Palestine?  Did he not realize until after Jesus' arrest and crucifixion that Jesus was not concerned with establishing a kingdom of this world?  Was he angry because Christ was not the Messiah he had counted on?  Was that the reason for his betrayal?

Some academics, such as Dr. Dennis Smith, who teaches New Testament at Phillips Theological Seminary in Tulsa, Oklahoma, dismiss this theory of Judas as a revolutionary.  Dr. Smith considers it a legitimate theory, but he still can't accept it.  However, other scholars, such as Dr. N.T. Wright, a leading British New Testament authority, don't discount it entirely.   According to Dr. Wright, "There's an outside chance it's true - 25 percent at the most."

There is a lack of proof to to support the claim that Judas Iscariot was a radical or that he belonged to a terrorist group.  He very likely resented the Roman presence in Judea and he may have been disappointed that Jesus was not interested in earthly politics.

Biblical evidence suggests that even before his betrayal of Jesus, Judas was no paragon of virtue. Still, it is almost impossible to know the complete mindset of a person who lived over two thousand years ago.  Judas may not have been a saint, but he was certainly human.  He was guilty of the same faults that many of us have, such as greed and dishonesty.