Vera Lynn on her 100th Birthday 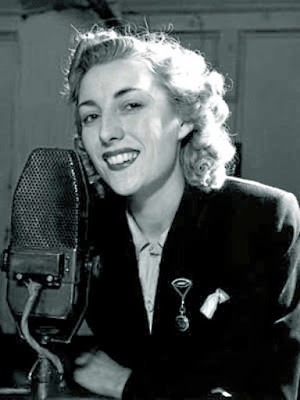 
Dame Vera Lynn celebrates her 100th birthday today.  The English singer, songwriter and actress is a living treasure to those of the World War II generation.  Her recordings and performances were extremely popular during that era.  Her wistful tunes brought hope and comfort to the British people and their allies in their darkest days.  Vera was nicknamed "the Forces sweetheart" and her most well known songs include "We'll Meet Again," "The White Cliffs of Dover," "A Nightingale Sang in Berkeley Square" and "There'll Always Be an England."  Their sentimental lyrics and unabashed patriotism resonated strongly with soldiers abroad who were homesick for their familiar surroundings.

Vera Lynn was born Vera Margaret Welch on March 20, 1917 in East Ham, Essex (now Greater London), England.  She was born to a working class family and, according to Encyclopaedia Britannica, began singing at men's clubs by the age of seven.  At 11, she assumed her grandmother's maiden name (Lynn) and joined a singing troupe.

After dropping out of school at 14, Vera caught the eye of a talent agent who found work for her at parties and events.  By 1935, she was singing the refrain on big band recordings and performing on the radio. In 1936, she released her first solo recording, "Up the Wooden Hill to Bedfordshire."

In 1937, Vera Lynn collaborated with bandleader Benjamin "Bert" Ambrose, entertaining on his radio program, Life from Mayfair, until 1940.  In late 1939, she performed her signature song, "We'll Meet Again," which was written by Ross Parker and Hughie Charles, two composers on Life from Mayfair. In 1941, Vera became the star of her own BBC radio show, Sincerely Yours, Vera Lynn.  The next year, she recorded "The White Cliffs of Dover."

Vera was affiliated with the Entertainments National Service Association which was established in 1939 to entertain soldiers.  During the war, she toured the world in order to perform for troops, often placing her own life in jeopardy.

When the war end, Vera travelled extensively throughout Europe and continued to broadcast her radio show for years.  She has continually engaged in charitable activities, including establishing a fund for those suffering from cerebral palsy.  She has also been a tireless advocate for veterans and their causes. In 2008, she became a patron of the Forces Literary Organisation Worldwide for ALL.  In 2010 she became patron of the British charity Projects to Support Refugees from Burma/Help 4 Forgotten Allies  In 2013, she lent her support to a People for Ethical Treatment of Animals' (PETA) campaign against pigeon racing, which she described as "utterly cruel."

To mark the centenary of Dame Vera's birth, her image will be projected over the White Cliffs of Dover today.

* In 1941, Vera married Harry Lewis, a clarinetist and saxophonist in Bert Ambrose's orchestra.  The couple had one child, a daughter named Virginia Penelope Anne Lewis.  Harry Lewis, who worked as Vera's manager after the war, died in 1998,

* In September of 2009, Vera, who was then 92 years of age, became the oldest living artist to have a Number 1 record in Britain. when her album, We'll Meet Again - The Very Best of Vera Lynn, reached top spot.

* In August of 2014, Vera was one of the 200 public figures who signed a letter to The Guardian opposing the independence of Scotland during the referendum campaign on the issue that year.

EDITOR'S UPDATE: Vera Lynn died on June 18, 2020.  Her family issued the following statement: "The family are deeply saddened to announce the passing of one of Britain's best-loved entertainers at the age of 103.  Dame Vera Lynn, who lived in Ditchling, East Sussex, passed away earlier today, 18 June 2020, surrounded by her close family."
Posted by Joanne at 4:41 PM