With the Americans going to the polls on November 8th to elect a new president, Number 16 proudly presents its third quiz on U..S. Presidents and First Ladies.  If you think you think you know your presidential trivia, give it a try.  Good luck and enjoy! By the way, if you are interested in the first two quizzes, you can find them by clicking the "QUIZ PAGE" tab at the top of the webpage.

B.  Richard Nixon and Jimmy Carter

2.  Which U.S. president was licenced as a bartender?

3.  Which of these 20th century U.S. president did not have a college degree?

B.  Lyndon B. Johnson

4.  Which of the following living Presidents of the United States is NOT left handed?

E.  All of the above are left handed.


5.  Which American president held approximately 200 slaves, although he opposed the institution and supported legislation to free slaves?  Many historians believe that he fathered multiple children with his biracial slave.

6.  Who was the most recent American president to have facial hair while in office?

7.  Where was Woodrow Wilson born?

8.  Which U.S. president was the youngest to die?

9.  Who was the first First Lady of the United States to have been both a wife and a mother to a U.S. president?


10.  Who was the first U.S. president to have been born in a hospital?

11,  Who was the first President of the United States to die of cancer?

B.  Rutherford B. Hayes


12.  What American president's name at birth was Leslie King, Jr.

13.  Who was the first First Lady to hold the Bible for her husband's presidential oath of office?

Before he entered politics, Abraham Lincoln was co-owner, along with his friend, William F. Berry, of a general store/drinking establishment in New Salem, Illinois called the Berry-Lincoln Store. Berry and Lincoln purchased the store in January of 1833.  In March of 1833, they were issued a tavern or liquor licence.  The two men were very different as Lincoln preferred not to drink, while Berry was apparently an alcoholic.  According to the website of the Illinois Historic Preservation Agency, the business failed, leaving Lincoln heavily in debt.  In 1834, he gave up bartending to run for state
legislator.


Harry S. Truman, the 33rd President of the United States, did not have a university degree. Truman graduated from high school in Independence, Missouri and found employment as a bank clerk in Kansas City.  He then moved to the family farm near Grandview, Missouri and managed the farm after his father's death in 1914.  In 1917, when the United States entered World War I, Truman served overseas.  When he returned to the U.S. in 1919, he married Elizabeth (Bess) Wallace.  He also opened a haberdashery with an army friend, but the business venture failed.  Truman began his political career in 1922 when he ran successfully for county judge.

Truman actually spent a semester at a business college in Kansas City.  He dropped out to find a job, although he later attended some night classes at the University of Missouri's law school.  Three other U.S. presidents enrolled in college but did not complete a degree.  They are James Monroe, William Henry Harrison and William McKinley.  McKinley, who was assassinated in Buffalo in 1901, attended Allegheny College in Meadville, Pennsylvaia for a year.  He also studied at the University of Mount Union in Alliance, Ohio.  He did not graduate from either university.  Beginning in 1866, Mckinley attended Albany Law School in New York.  He was admitted to the bar in 1867 in Warren, Ohio without having earned a degree. George W. Bush, 43rd President of the United States, is right-handed.  His father, George H.W. Bush is left-handed as are Bill Clinton and Barack Obama.  Note: The next American president will be right-handed as both Hillary Clinton and Donald Trump are right handed.


Thomas Jefferson, the primary author of the American Declaration of Independence was a slave owner.  Many historians believe that he had children with his biracial slave Sally Hemings, the half-sister of his wife, Martha Wales Skelton Jefferson.  It is thought that Hennings, Martha's half-sister, became Jefferson's concubine after Martha's death in 1782.

Woodrow Wilson, 28th President of the United States, was born in  Staunton, Virginia on December 28, 1856.  He spent his early years in Augusta, Georgia and Columbia, South Carolina.  Although Wilson later became President of Princeton University and Governor of New Jersey, he was born a Southerner.  His father, Joseph Ruggles Wilson, was a Presbyterian minister who defended slavery.

Virginia is known as the "Birthplace of Presidents."  Four of the first five presidents were born in that state.  To date, eight U.S. presidents have been born in Virginia, the most recent of whom is Wilson. The other seven Virginia-born American presidents are George Washington, Thomas Jefferson, James Madison, James Monroe, William Henry Harrison, John Tyler and Zachary Taylor.


Abigail Adams was the first First Lady to be both a wife and a mother to an American president.  Her husband was John Adams, 2nd President of the United States and her son was John Quincy Adams, 6th President of the United States.  In 2001, Barbara Bush, wife of George H.W. Bush, became the second First Lady to be both spouse and mother to a U.S. President when her son, George W. Bush, became president.


James Earl "Jimmy" Carter, 39th President of the United States, was the first American president to be born in a hospital.  Carter, now 92 years old,  was born on October 24, 1924 at the Wise Sanitarium, a small hospital in Plains, Georgia.  His mother, Lillian, was a registered nurse there. Jiimmy Carter's birthplace is currently a nursing care facility called the Lillian G. Carter Nursing Center.


Ulysses S. Grant, 18th President of the United States was the first president to die of cancer.  Grant, a heavy cigar smoker, died of throat cancer on July 23, 1885.  He was 63 years old.


Gerald Rudoph Ford, Jr., 38th President of the United States, was born Leslie Lynch King, Jr. in Omaha, Nebraska on July 14, 1913.  His mother, Dorothy, claimed that her husband was physically abusive and moved to the home of her parents in Grand Rapids, Michigan  She divorced Leslie King and then married Gerald Rudolff in 1916.  The three-year-old future president took on his stepfather's name but did not change his name legally until 1935. 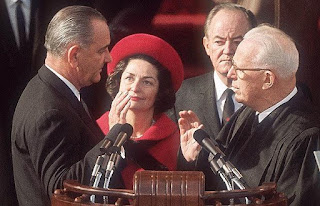 Lady Bird Johnson became the first First Lady to hold the Bible at her husband Lyndon B. Johnson's inauguration.ceremony on January 20, 1965.  She did this at LBJ's request.  Until then, the Bible had always been held by the executive secretary of the Joint Congressional Inaugural Committee.  LBJ and his wife began a tradition that has continued to the present.