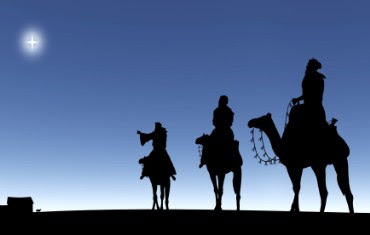 We three kings of Orient are
Bearing gifts we traverse afar.
Field and fountain, moor and mountain,
Following yonder star.


Today, January 6th, marks the feast of Epiphany, which celebrates the revelation of the Christ child to the Magi.  The story of the Magi has always intrigued me.  It is full of wonder and mysticism.   I have always been curious about the scholarly Wise Men who, according the Gospel of Matthew, came to Jerusalem declaring, "Where is he that is born 'King of the Jews,' for they had seen his star in the East and have come to worship him."

Who were these mysterious foreigners who travelled such great distance to pay homage to the child Jesus?  They were certainly astronomers, but details about them in the New Testament are rather sketchy.  Their names are not even recorded in Matthew's gospel, nor is their exact number.  Yet, they are commonly depicted as a trio and referred to as the "Three Wise Men."  Why?

Matthew;s narrative tells us that the Magi came bearing three gifts, namely gold, frankincense and myrrh. That is probably why, according to The Encyclpaedia Britannica, Western tradition holds that there were three.Wise Men. Eastern tradition, however, sets the number at 12.

Although the Bible provides no names for the Magi, custom has given them the names Melchior, Caspar and Balthazar (or variations of those names).  Britannica asserts that around the 8th century, the names of the "three" Wise Men appeared in a chronicle known as the Excerpta latina barbari.  In Western church tradition, Balthazar is often presented as a king of Arabia, Melchior as a king of Persia, and Caspar or Gaspar as a king of India.

How about the gifts brought by the Wise Men?  What exactly are frankincense and myrrh, you may wonder?  Well, both frankincense and myrrh grow as small small trees or shrubs and they both come from the botanical family Burseraceae. Frankincense is used as an incense and perfume.  It is obtained from trees of the species Bowellia.  The word "frankincense" is derived from old French ("franc encens,"), meaning high quality incense.  Myrrh is a resin or sap-like substance that is taken from the barks of trees of the Commiphora species.

Myrrh trees are native to Northern Africa and the Middle East.  They can be found in Somalia, Ethiopia, Arabia and Yemen. They have light bark, tangled branches and little, white flowers.  Their resin has a bitter taste and the word "myrrh" itself is derived from "murr," meaning "bitter" in Arabic,

In ancient times, frankincense and myrrh were used as medicines for a variety of physical illnesses. Today, myrrh oil is beneficial for maintaining healthy skin.  It is also used as an aromatherapy oil for massages, a flavouring for food products and an embalming oil.  Myrrh oil's use as an embalming agent also goes back to ancient times.  The Egyptians used it for anointing the bodies of dead pharaohs and during religious rituals.

Gold. frankincense and myrrh have great symbolism in association with the birth of Christ.  Gold represents royalty or divinity. Frankincense (an incense) represents priesthood and myrrh (an embalming fluid) represents death or suffering.

*  The story of the Magi appears in Matthew 2: 1-12.  The Gospel of Matthew is the only one of the four Canonical gospels that mentions the Wise Men. There is no reference to them in the gospels of Mark, Luke or John.

*  "Epiphany" is a Greek word meaning revelation or manifestation.  In ecclesiastical terms, it is the manifestation of a supernatural or divine reality, especially in the form of a deity.  In Christian terms, it is the manifestation of Christ to the gentiles, as represented by the Magi.  In the Western Church, the feast of the Epiphany is celebrated on January 6.  In the Eastern Church, the baptism of Christ is commemorated on the sane date,

*  According to Matthew, the Wise Men were sent on to Bethlehem by King Herod 1 (also known as Herod the Great) of Judea, who asked them to reveal to him the exact location of Jesus so that he could worship him too.  However, they were warned in a dream not to return to Herod and they "left for their own country by another route." 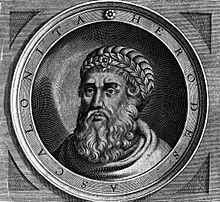 By all accounts, King Herod, a Roman client king, was a tyrant. The Jewish Encyclopedia says Herod was "prepared to commit any crime in order to gratify his unbounded ambition."  In The Crash Course in Jewish History (2010), by Rabbi Ken Spino, he is described as "the evil genius of the Judean nation."

Matthew's gospel relates that Herod was troubled when he heard of the Wise Men from the East and their intention to pay homage to "the King of the Jews."  He consulted with all the chief priests and scribes, inquiring as to where this Messiah was to be born.  'In Bethlehem of Judea,' he was told, 'for thus it is written by the prophet.  But you, Bethlehem, in the land of Judah, are not the least among the rulers of Judah;  For out of you shall come a Ruler Who will shepherd My people Israel.'"

According to Matthew, the Magi and the child Jesus were a source of consternation for Herod.  He was obviously threatened by them.