International Women's Day - Ahead of their time: John Stuart Mill and Sir John A. Macdonald 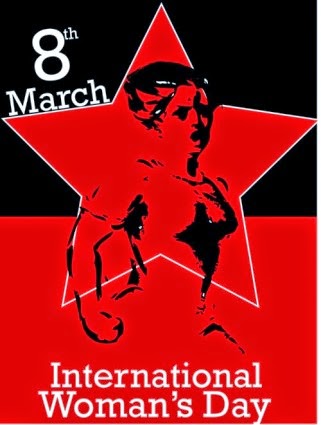 Since today is International Women's Day, I thought it would be interesting to focus on two 19th century men who were ahead of their time in supporting women's rights and upholding the notion of female equality.  One of them was British, the other was a Canadian.  Their ideas regarding the equality of the sexes were truly revolutionary for men of their era.

- John Stuart Mill
From The Subjection of Women


John Stuart Mill (1806-1873) was an eminent English philosopher and political economist.  He was born in London on May 20, 1806, the eldest son of James Mill (1773-1836), a Scottish philosopher, historian and economist . Mill learned Greek and Latin at an early age and was an extremely precocious child. He was educated under the watchful eyes of his father, a strict disciplinarian, and studied the works of Aristotle, Plato, Thomas Hobbes, Adam Smith and others.

As a teenager, Mill became a Utilitarian, a follower of the philosophy of Jeremy Bentham (1748-1832), whose work he greatly admired.  Simply put, Utilitarian holds that the greatest happiness of the greatest number is the measure of right and wrong.  Mill argued that the equality of women was beneficial to both males and females and to society as a whole.

In 1851, John Stuart Mill married Harriet Taylor (née Harriet Hardy), a philosopher and proponent of women's rights.  An ardent suffragette, she addressed the issue of domestic violence in her writings. She is best known as the author of  an essay, "The Enfranchisement of Women," published in The Westminster Review in 1859.  "The Enfranchisement of Women" not only put forth the case for giving women the vote, it also argued for "equality in all rights, political, civil, and social, with the male citizens of the community”

Harriet died on November 3, 1858 at Avignon, France.  Her husband's essay, The Subjection of Women, which he composed in 1861, was greatly influenced by her line of thought.  The essay first appeared as a pamphlet in 1869, not long after John Stuart Mill had ended a three-year term as the member of the British parliament for Westminster.

In 1866, while still holding a seat in Parliament, Mill put forward a petition for women's suffrage and on May 20, 1867, he made a plea in the House of Commons for female enfranchisement.

. . . the time is now come when, unless women are raised to the level of men, men will be pulled down to theirs. The women of a man's family are either a stimulus and a support to his highest aspirations, or a drag upon them. You may keep them ignorant of politics, but you cannot prevent them from concerning themselves with the least respectable part of politics - its personalities . . .(Hansard, 822)

With his views on the equality of women and his unwavering support of women's suffrage, John Stuart Mill went against the grain of conventional thinking during the Victorian era.  He bravely challenged the fundamental beliefs of a patriarchal society.  Below is an 1873 caricature of J.S. Mill in Vanity Fair.  The caption reads "A Feminine Philosopher." 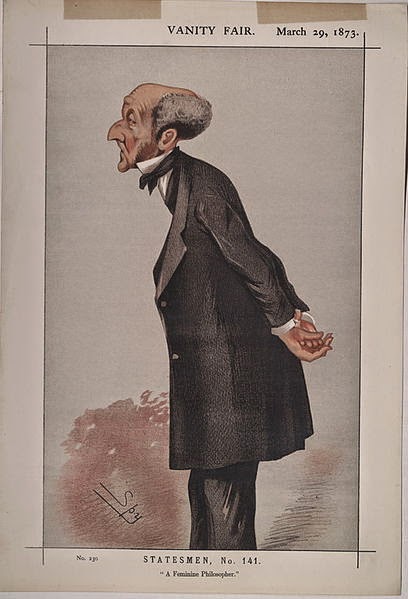 Sir John Alexander Macdonald was born in Glasgow, Scotland in 1815,  When he was a boy, he and his family immigrated to the colony of Upper Canada (present-day Ontario).  They settled in Kingston, where John later opened his own law practice and began a political career as a member of the legislature of Upper Canada.

Macdonald was the leading figure in bringing about Canadian Confederation and on July 1, 1867, he was designated first prime minister of the newly created Dominion of Canada.  In the 1880s, he became an advocate for female suffrage at a time when no country allowed women to vote.
In his book Nation Maker, author Richard Gwyn writes that Sir John A. was "the first national leader in the world to attempt to grant women the vote."  According to Gwyn, Macdonald stated it was "merely a matter of time" before change with regard to women's rights would take place.

In 1883, Sir John put forth the first of three suffrage bills in the Canadian House of Commons. Early in 1885, Macdonald proclaimed, that Canada "should have the honour of first placing woman in the position that she is certain, after centuries of oppression, to obtain."  - that is "completely establishing her equality as a human being and as a member of society with man."  Alas, it was not be because all three bills were defeated.

Indeed, it was not until 1918 (33 years after Macdonald's bold proclamation) that royal assent was finally given to a bill that granted the right to vote in federal elections to all Canadian women 21 years of age and over, provided they were not foreign born and met property requirements in certain provinces.

New Zealand holds the distinction of being the first country to give women the right to vote in 1893, although Sweden allowed conditional women's suffrage between 1718 and 1771 to taxpaying women who were listed as "professionals."  American women won the right to vote in 1920 after the ratification of the 19th Amendment to the United States Constitution.