Olivia de Havilland and Joan Fontaine: Was their "feud" real or exaggerated by the media? 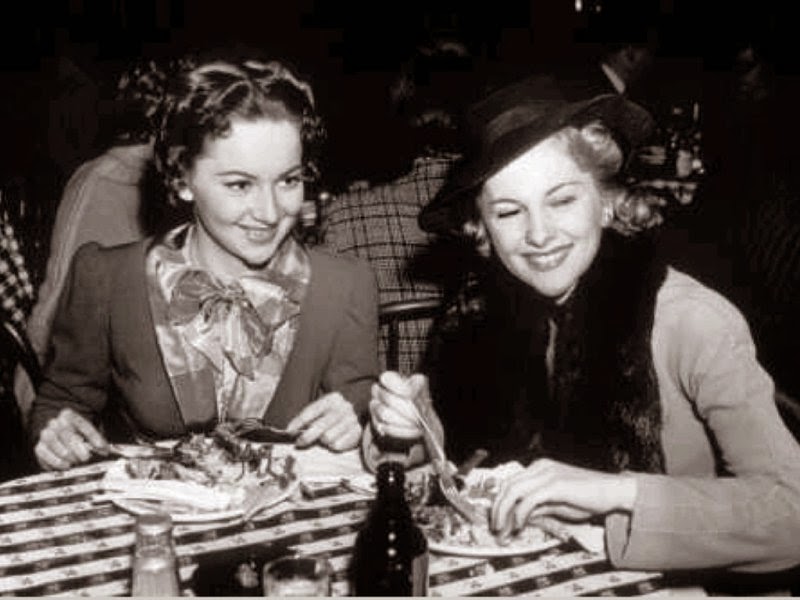 While promoting her autobiography, No Bed of Roses, in 1978, famed actress Joan Fontaine commented on her relationship with her sister, Olivia de Havilland, in an interview with People magazine.  "You can divorce your sister as well as your husbands,"  she said.  "I don't see her at all and I don't intend to."  She also complained to People that "Olivia has always said I was first at everything - I got married first, got an Academy Award first, had a child first.  If I die, she'll be furious because again I'll have got there first."

As it turned out, Fontaine did get there first.  Joan, 96, passed away at her home in Carmel-by-the-Sea, California on December 15, 2013.  A day later, Olivia issued a rare statement of her own from her longtime residence in Paris.  The  97-year-old de Havilland declared that "I was shocked and saddened to learn of the passing of my sister, Joan Fontaine, and my niece, Deborah (Joan's daughter), and I appreciate the many kind expressions of sympathy that we have received."

The sisters were both born in Tokyo, Japan to British parents.  Olivia Mary de Havilland was born July 1, 1916 and Joan de Beauvoir de Havilland followed on October 22, 1917.  Their father, Walter Augustus de Havilland, was employed as an English professor at the University of Tokyo.  He ended up changing careers and practising patent law in Japan.  Their mother, Lilian Augusta (née Ruse), was a stage actress who put her own career on hold to accompany her husband to East Asia.  In the 1940s, after her daughters had become Hollywood stars, she returned to the stage under the name Lilian Fontaine.  She died on February 20, 1975 at the age of 88.

When Joan was two years old, Walter left Lilian for the family's Japanese maid.  In 1919, the sisters moved to California with their mother.  Joan was a sickly child and it was thought that the climate in California would be more conducive to her her health.

In his 1984 book Sisters: The Story of Olivia De Havilland and Joan Fontaine, biographer Charles Higham wrote that the sisters had a troubled relationship from their childhood days.  According to Higham, Olivia would rip up Joan's hand-me-down clothes and Joan would have to sew them back together. He claimed that a major source of the conflict between the sisters was Fontaine's alleged conviction that de Havilland was their mother's favourite child.

In Bed of Roses, Joan wrote of how their mother's death caused great discord between the sisters. Joan was out of town when Lilian passed away in 1975 and Olivia took charge of all the funeral arrangements.  In her autobiography, Fontaine claimed that she only learned about the memorial service by chance.  She stated that she was not invited and that it was only after threatening "to call the press and give them the whole story" that the service was delayed in order to allow Joan to attend.

As Joan mentioned in her People magazine interview, she was the first of the sisters to marry. On August 20, 1939, she  married Anglo-American actor Brian Aherne in Del Monte, California. Aherne, born in Worchester, England in 1902, once dated Joan's sister, Olivia.  He was a popular character actor in motion pictures during the 1930s and 1940s and into the 1950s.  His marriage to Joan Fontaine ended in divorce in 1945.  Brian Aherne died of heart failure in Venice, Florida on February 10, 1986.at the age of 83.

Joan married three more times after her divorce from Aherne.  In May of 1946, she married her second husband, actor/producer William Dozier, in Mexico City.  The couple had a daughter, Deborah Leslie, in 1948 and separated in 1949.  Fontaine filed for divorce in 1950, accusing Dozier of desertion. Their divorce became final in January of 1951.  In 1953, Dozier wed actress Ann Rutherford, best known for her role as Scarlett O'Hara's sister, Carreen, in Gone with the Wind.  William Dozier passed away on April 23, 1991.

Joan married her third husband, producer and writer Collier Young, on November 12, 1952.  They separated in 1960 and their divorce was finalized on January 3, 1961.  Young, the creator of the TV series Ironside, died in a road accident in Los Angeles on Christmas Day 1980.  He was 72 years old.

In the early 1950s, Joan Fontaine informally adopted a young Peruvian girl named Martita. Martita's parents permitted Fontaine to become Martita's legal guardian in order to provide the child with a better life. Fontaine promised Marita's parents that she would send the girl back to Peru for a visit when when she turned 16 years old. When Marita reached that age, however, she refused to return to South America - even though she was given a round-trip ticket - and chose to run away instead.  Joan was not pleased and she and her teenage ward became estranged.

Olivia de Havilland, has been married twice.  She married first husband, Marcus Goodrich, on January 24, 1946, about seven and a half years after Joan had married Brian Aherne.  Goodrich was veteran of the Navy and an author and screenwriter.

Olivia's first husband was one source of friction between Olivia and Joan.  Olivia, who has always been more tight-lipped than her sister about her relationship with Joan, told The Associated Press in 1957 that "Joan is very bright and sharp and has a wit that can be cutting. She said some things about Marcus that hurt me deeply. Consequently, she was aware there was an estrangement between us."

Olivia'a second husband was French journalist Pierre Galante, editor of Paris Match.  Olivia and Pierre met at the Cannes Film Festival in 1953, not long after her divorce from Marcus Goodrich. They wed on April 2, 1955 and had one child, a son named Gisèle Galante (born July 18, 1956). Although they separated in 1962, their divorce did not become final until 1979.  It was this marriage to Galante, however, that first brought Olivia to Paris.  She resides in an apartment near the Arc de Triumphe and is greatly respected in France.  In 2010, she received the Legion of Honour from then-President Nicolas Sarkozy.

In 1941, Joan Fontaine was nominated for an Academy Award for her role in Rebecca, directed by Alfred Hitchcock; but he Oscar was awarded to Ginger Rogers for Kitty Foyle that year.  The following year, however, Joan was again nominated for  Best Actress,in a Leading Role, this for her performance in Suspicion, another Hitchcock film.  The problem was that Olivia was also nominated for her performance in Hold Back the Dawn.  It marked the first time that two siblings had ever competed in the same category at the Academy Awards.  (It happened again, 25 later, when Lynn and Vanessa Redgrave were both nominated for best actress.  Lynn was nominated for Georgy Girl and Vanessa for Morgan!.  Neither sister won and Elizabeth Taylor received the Oscar for Who's Afraid of Virginia Woolf?.)

Back in 1942, the Academy Awards ceremony took place over dinner.  Joan and Olivia were seated at the same table, making the situation even more awkward.  Joan, who thought her performance in Rebecca was superior to her performance in Suspicion, didn't think that her chances of winning were very high.  Yet, much to her surprise, she heard her name called.  In her autobiography No Bed of Roses, Joan recalled the moment..  She wrote,  "I stared across the table, where Olivia was sitting directly opposite me.  'Get up there, get up there,' Olivia whispered commandingly.  Now what had I done?  All the animus we'd felt toward each other as children, the hair-pullings, the savage wrestling watches, the time Olivia fractured my collarbone, all came rushing back in kaleidoscopic imagery.  My paralysis was total. I felt Olivia would spring across the table  and grab me by the hair."

On winning the Oscar for Suspicion, Joan "half-jokingly" told Scott Feinberg of The Hollywood Reporter that she was "terrified because of Olivia." and that she was "still afraid of her."  She added, "When I did get it, everybody said: 'Oh boy, you should have got that for the other one (Rebecca).

Below is photo of Joan and Gary Cooper holding their Oscar statuettes in 1942. 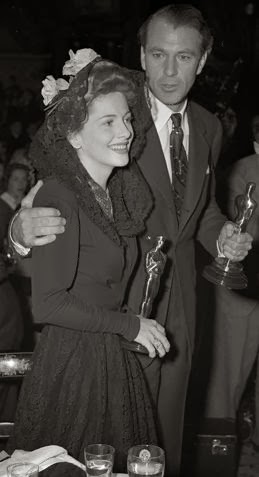 Olivia eventually won a Best Actress Oscar of her own in 1947 for her role in the film To Each His Own. After she had finished her acceptance speech, Joan approached her backstage and attempted to congratulate her.  Olivia, however, turned away from Joan and rebuffed her.  The moment was captured in a photograph by Hymie Fink of Photoplay magazine.

Yet, the Hollywood Reporter's Scott Feinberg wrote that in a 2003 phone conversation with Joan Fontaine, she told him that "This 'Olivia feud' has always irritated me because it has no basis." When he asked Joan if she and her sister were communicating with each other, her response was "Absolutely."  Feinberg was stunned to hear her declare, "Let me say, Olivia and I have never had a quarrel.  We have never had any dissatisfaction.  We have never had hard words.  And all this is press."  She said she had seen Olivia in Paris and that Olivia had visited her at her apartment in New York often.

Feinberg wrote that he would like to accept Joan's words as the truth instead of years of media reports about the sisters' and their rocky relationship.  He concluded that "unless Olivia, Deborah or Joan's assistant during her later years, Susan Pfeiffer, wish to share their own perspectives, I suppose we'll never know for sure."

Perhaps, as usual, the truth is somewhere in between.  Joan and Olivia obviously had an intense rivalry and there were hard feelings between the two during various phases of their lives.  They undoubtedly hurt each other deeply.  Yet, despite all of that, it seems that the two sisters really loved each other and that Olivia genuinely mourned Joan's death.