Thomas D'Arcy McGee: The Assassination of a Father of Confederation 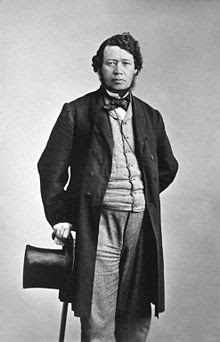 There is no danger of my being converted into a political martyr.  If ever I were murdered, it would be by some wretch who would shoot me from behind.


Thankfully, political assassinations in Canada have been few and far between.  There have been two in Canadian history and they occurred over a hundred years apart.  During the October Crisis of 1970, Quebec Deputy Premier and Minister of Labour Minister Pierre Laporte was kidnapped and murdered by the Front de libration du Quebec (FLQ) and on April 7, 1868, Thomas D'Arcy McGee was assassinated in Ottawa.

Thomas D'Arcy Etienne Hughes McGee (known as D'Arcy) was born on April 13, 1825 in Carlingford, Ireland, the son of James McGee, a coast guard, and Dorcas Catherine Morgan, a Dublin bookseller who had participated in the Irish Rebellion of 1798.  He became a journalist, a historian, a poet, a politician, a skilled orator and a Father of Canadian Confederation.  McGee described his good qualities as "a bold face, a fluid tongue and a love for argument."  Only five-foot-three (160.02 cm.), he was fiery, eloquent.and full of energy.

At the age of 17, young D'Arcy emigrated from Ireland to the United States where he eventually became editor of the Boston Pilot., a Catholic newspaper.  In 1845, he returned to Ireland where he edited the nationalist newspaper Nation and became involved with Young Ireland, a social and political movement that advocated rebellion against the British.  He married Mary Teresa Caffrey in Dublin on July 13, 1847.

After the Young Irelander Rebellion of  1848,  D'Arcy and his wife fled Ireland because D'Arcy was wanted by the police and there was a reward of 1,500 pounds for his capture.  They went to the United States and spent almost a decade there.  The couple had six children (five daughters and one son), only two of whom survived their father.  Their first child, Dorcas, died at the age of three and another child, Rose, died of scarlet fever.  While in the U.S., McGee gained prominence in the American Irish community.  He founded and edited the New York Nation and the American Celt of Boston.  Yet, he became increasingly disenchanted with American democracy and American ideals.

In the spring of 1857, at the request of some leading Irish Canadians, McGee left the United States and immigrated to pre-Confederation Canada.  He settled in Montreal where he began an Irish nationalist newspaper, New Era, which advocated the federation of British North America, a transcontinental railway, the settlement of the West, a protective tariff, distinctive Canadian literature and the creation of a province for Aboriginal peoples.  (It is interesting to note that during the general election of 1878, Sir John A. Macdonald proposed a "National Policy" consisting of a railway from sea to sea, tariff protection for Canadian manufacturers and Western settlement).  D'Arcy McGee studied law at Montreal's McGill University and received his degree in 1861.

In 1858, McGee was elected to the Legislative Assembly of the Province of Canada as the member for Montreal West.  By the 1860s, there was great instability in the land as a result of the American Civil War and legislative deadlock between English-speaking and French-speaking Canada.  McGee initially aligned himself with George Brown, Sir John A.'s political rival and founder of the Toronto Globe (later The Globe and Mail).  Brown's Reform Party, however, displayed a lack of enthusiasm for McGee's initiatives, causing McGee to join forces with John A. Macdonald and George-Etienne Cartier.  Cartier, co-premier with Macdonald, of the Province of Canada, was instrumental in persuading French-speaking Canadians to accept Confederation.

McGee became the minister of agriculture, immigration and statistics in the Conservative government of 1863.  He retained that portfolio in the "Great Coalition," led by Macdonald and Cartier.  This coalition of all the parties in the Legislative Assembly was proposed by George Brown and was formed to find a solution to the political impasse.  It made it possible to hold the Charlottetown and Quebec conferences of 1864 that set the stage for Confederation.  Thomas D'Arcy McGee was a delegate at both conferences.  At Quebec City, it was McGee who introduced a resolution calling for the guaranteed educational rights of religious minorities in English and French-speaking Canada.

By 1866, Darcy McGee's political career was on the wane.  He wasn't even invited to England that year for the London Conference in which delegates drafted the British North America Act, a constitution for a new country called Canada.  Although narrowly elected to the House of Commons in the fist Canadian Parliament of 1867 as the member for Montreal West, McGee was excluded from Prime Minister John A. Macdonald's first post-Confederation cabinet.  By 1868, he was contemplating retiring from politics and looking forward to working on his writing and poetry. He never got the chance.

On April 7, 1868, Thomas D'Arcy McGee attended a late night session of the House of Commons in Ottawa.  The parliamentary debate went on past midnight and McGee delivered a passionate speech in support of national unity.  He then returned home to his boarding boarding house on Sparks Street, just a few blocks from Parliament Hill.  While waiting for his landlady to open the door,  he was shot and killed  by a single bullet to the head.  McGee was 42 years old at the time of his death and was given a state funeral in the nation's capital.  He is interred in a crypt at the Cotes des Neiges Cemetery in Montreal.

Below is a photo of the rooming house on Sparks Street where D'Arcy McGee lived.  There is a plaque commemorating his assassination. 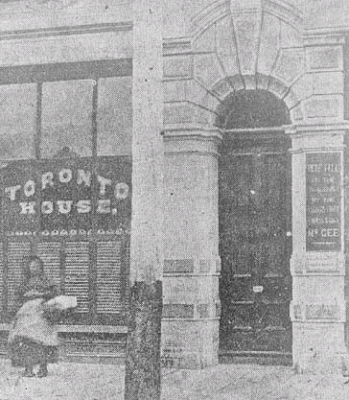 The assassination of D'Arcy McGee made international headlines.  On April 14th, 1868, the New York Times, reporting on McGee's funeral, estimated that "80,000 people were on the streets and 30,000 were in the procession."  The Times' account of the funeral declared that people wept aloud and that the "feeling of sorrow is sincere and deep, and pervades the entire community."

A $2,000 reward was offered for the capture of D'Arcy McGee's murderer.  The police and the government immediately suspected the Fenian Brotherhood, an American-based group that advocated the independence of Ireland from Britain by invading Canada and holding it hostage. In order to pressure the British into leaving Ireland, there had been Fenian raids on British army forts and other places in Canada.  Catholic Irish- Canadians were deeply divided in their feelings about the Fenians.  While sympathetic to the Fenian cause, they felt loyalty to their new home.

Since moving to Montreal, D'Arcy McGee had moderated his radical Irish nationalist views and had been quite vocal in his denunciation of the Fenians.  Although he once supported the American annexation of Canada, he became fiercely oppose the takeover of his adopted country.  He was a harsh critic of the 19th Century concept of Manifest Destiny, the idea that the United States was destined to expand across the North American continent and that God had given America a mission to spread its values and its Republican form of government. 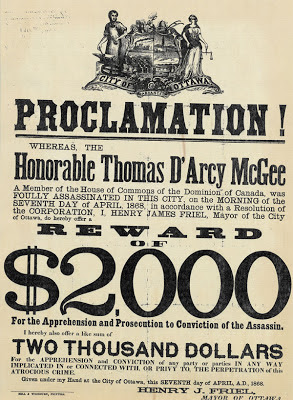 It didn't take long for the authorities to arrest Patrick James Whelan, an Irish-born tailor, and a suspected Fenian sympathiser. Whelan, born circa 1840 in Galway (making him about 28 years old at the time of McGee's assassination), immigrated to Canada about 1865.  He worked as a tailor in Quebec City and later in Montreal.  On February 13, 1867, Whelan married Bridget Boyle at St. Patrick's Church in Montreal.  By November of 1867, he had moved to Ottawa and was employed by a tailor named Peter Eagleson.


According to the Dictionary of Canadian Biography, Patrick J. Whelan was arrested within 20 hours of the murder when the police discovered a fully loaded .32 calibre Smith and Wesson revolver in his pocket.  Although more than 40 other suspects were imprisoned (shades of the War Measures Act), Whelan was charged with McGee's murder on April 9, 1868.  The other prisoners were soon released.or quickly acquitted.

After an eight-day trial by jury in Ottawa, a verdict of guilty was delivered.  On February, 11, 1869, before an estimated 5,000 spectators, Patrick J, Whelan was hanged for the murder of Thomas D'Arcy McGee at the Carleton County Gaol.  It was the  last public execution in Canadian history. Within months, a law was passed banning public executions in Canada.

Whelan declared himself to be innocent of the murder of D'Arcy McGee.  Upon hearing the jury's verdict, he declared, "I am held to be a murderer.  I am here standing on the brink of my grave, and I wish to declare to you and my God that I am innocent, that I never committed this deed." Before his execution, according to the Dictionary of Canadian Biography, he admitted to knowing the person who perpetrated the crime.

Many have questioned whether Patrick J. Whelan was actually guilty of the murder of Thomas D'Arcy McGee.  Others have speculated that he was part of a conspiracy to assassinate McGee. Whelan's gun disappeared after his trial and was thought to have been lost forever.  The revolver was located in October of 1973 as an heirloom of the family of Scott Renwick.  Ballistics tests were done but the results were inconclusive.  Renwick, whose grandfather had given him the gun, decided that his family had owned it long enough.  In 2005, the weapon was offered at an auction in Hamilton, Ontario.  Bidding started at $55,000.

* To date, Thomas D'Arcy McGee is the only Canadian federal politician ever to be assassinated.

* On March 25, 1880, a disgruntled former employee of the Toronto Globe entered George Brown's office and shot him in the leg.  The man, George Bennett, who had worked in the Globe's engine room, was upset because he had been dismissed by a foreman.  At first, the injury did not seem life-threatening.  The wound, however, became gangrenous and Brown died on May 9, 1880.  The shooting was not politically motivated and Brown's parliamentary career had long ended.  Therefore, it is more accurately classified as murder rather than an assassination.

* During the trial of Patrick Whelan, the press dubbed him "the tailor with the red whiskers."

* Patrick Whelan's widow, Bridget, returned to Montreal where she lived in a reclusive manner until her death.