Janis Joplin: The girl who sang the blues 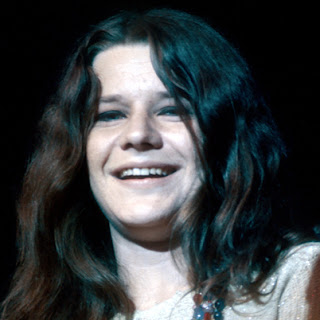 Don McLean released his American Pie album in 1971, not long after the death of Janis Joplin from an accidental drug overdose on October 4, 1970.  Joplin is widely  thought to be "the girl who sang the blues" in McLean's song.  Perhaps that is why his lyrics are so wistful and melancholy. McLean must have also been influenced by another drug-related death, that of rock guitarist Jimi Hendrix just sixteen days earlier.  Sadly, both Joplin and Hendrix were only 27 years old when they passed away.

If Janis Lyn Joplin were alive today, she would be celebrating her 70th birthday.  She was born in Port Arthur, Texas on January 19, 1943.  Her father, Seth Joplin, was an engineer at Texaco and her mother, Dorothy (nee East) was a registrar at a business college.  Janis was the eldest of three Joplin children.  She had a sister named Laura and a brother, Michael.

Janis attended Thomas Jefferson High School where she was bullied and shunned because she suffered from acne and was overweight.  She took solace in the music of blues artists such as Bessie Smith and Ma Rainey.  They inspired her to become a blues singer.

Janis graduated from Jefferson High in 1960.  She then enrolled at the Lumar State College of Technology.  She left Lumar after only one semester to take some secretarial courses at Port Arthur College.  Eager to leave the small Texas oiltown and begin a music career, Joplin moved to Los Angeles in 1961.  She returned home and entered the  University of Texas at Austin in 1962. It was there that she began performing her music on campus and at a local pub.

Still restless, Joplin left for California again in 1963.  This time she settled in San Francisco where she  became part of the Haight-Ashbury scene and began to use amphetamines and heroin.  She appeared so thin and unhealthy that, at the urging of concerned friends, she once again returned to Port Arthur in 1965.  She did not stay there, of course, and went back to San Francisco where the hippie movement was beginning to blossom.

Janis joined the psychedelic acid-rock group Big Brother and the Holding Company which was managed by her friend Chet Helms.  They had their first gig in 1966 and Joplin made her mark as their lead singer.   In June of 1967, the band performed in front of tens of thousands of people at the Monterey Pop Festival.  The Monterey performance gained the group a great deal of recognition after which they released their self-titled debut album in August of 1967, but sales for the album were somewhat disappointing. 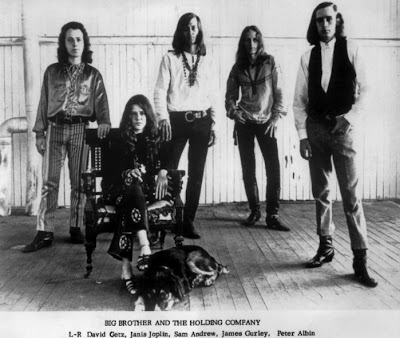 In November of 1967, the group signed a contract with Columbia Records  They acquired a new manager too - Albert Grossman.  Grossman was well known as a music entrepreneur and had managed some of the most popular folk and folk rock performers.  His clients included such big names as Bob Dylan, Peter, Paul and Mary, Odetta and Ian and Sylvia.

Big Brother's second album, Cheap Thrills, was released in August of 1968.  It was a smashing success and earned gold record status.  Columbia chose to market Janis as the star attraction and the band's name was changed to Janis Joplin and the Big Brother and the Holding Company. As 1968 drew to a close, however, the 26-year-old Joplin decided to go solo and form her own band.  She embarked on a tour of Europe with her new group, the Kozmic Blues Band.  Janis and the Kozmic Blues Band played London's Albert Hall.  They also performed at a very raucous concert in Frankfurt in the former West Germany.

In August of 1969, Janis Joplin appeared at the Woodstock Music Festival where she sang ten songs:  "Raise Your Hand," "As Good as You've Been to This World," "To Love Somebody," "Summertime," "Try (Just a Little Bit Harder)," "Kosmic Blues," "Can't Turn You Loose," "Work Me, Lord," "Piece of My Heart" and "Ball and Chain."  In late 1969, she appeared with Tom Jones on his television variety show, This is Tom Jones.  Click on the link below to watch Janis perform the song "Raise Your Hand" with Tom.

At the end of 1969, the Kozmic Blues Band broke up and Janis' drug habit was clearly out of control.  In February of 1970, Janis travelled to Brazil where she tried to kick her heroin addiction. She managed to stay clean for awhile, but resumed her use of drugs upon her return to the United States.  It was about this time that she formed a new band called the Full Tilt Boogie Band.  The Full Tilt Boogie Band was comprised mainly of Canadian musicians and it began touring in May of 1970.

Just months before her death, Janis made two television appearances on The Dick Cavett Show. In the first appearance, on June 25, 1970, she told Cavett that she would be attending her ten-year high school class reunion even though she had been ridiculed by fellow students.  During her second appearance on August 3, 1970, she mentioned her plans to perform at the Festival for Peace to be held at New York's Shea Staudium on August 6, 1970.

Janis Joplin's final public performance was with the Full Tilt Boogie Band at the Harvard Stadium in Boston on August 12, 1970.  She spent the last weeks of her life recording a new album in Los Angeles.  The album was called Pearl and it was produced by Paul A. Rothchild, the producer of The Doors' recordings.  Although Janis died before the album was fully completed, she had recorded enough material to create a long-playing record.

Although Joplin never lived to see its success, Pearl would become the most popular album of her career.  It also contained her biggest hit single, Me and Bobby McGee.  Me and Bobby McGee was written by Kris Kristofferson with whom Janis had had a relationship in the spring of 1970. That song still resonates with me because I can remember my high school classmates singing "freedom's just another word for nothing left to lose . . ."

On October 4th, 1970, producer Paul Rothchild became alarmed when Janice did not show up for a recording session.  John Cooke, Full Tilt Boogie's road manager drove to the Landmark Hotel in Hollywood Heights where she was staying.  Cooke noticed that her car, a psychedelically painted Porsche 366 Cabriolet, in the parking lot.  Upon entering her room, he discovered her body on the floor next to her bed.  The official cause of death was an overdose of heroin, possibly combined with the effects of alcohol consumption.

Janis Joplin personified her turbulent era. She was most comfortable with the San Francisco counter-culture and the anti-establishment.  A trail blazer for female rock artists. she exuded raw energy.  Although she was  crude and profane, there was also a tender side to her. Her music was filled with pain and heartbreak but behind that rough exterior was little girl baring her soul to the world through her songs.  She once said: "You can fill your life with ideas and still go home lonely. All you really have that really matters are feelings.  That's what music is to me."  I believe that if Janis Joplin were still with us at the age of 70, she would still be belting out "Piece of My Heart" with that unmistakable raspy voice.  Her soulful sound is not to be forgotten.  It is her legacy.

*  Laura Joplin, Janis' younger sister,  published a book entitled Love, Janis in 1992..  Laura wrote the book after discovering some old letters Janis has written.  The letters sparked her curiosity about her famous sibling and led her to interview Janis' friends and colleagues.

*  In 1995, Janis Joplin was inducted into the Rock and Roll Hall of Fame.

*  In 2003, Rolling Stone magazine included Pearl in its list of thee 500 Greatest Albums of All Time.  Pearl was ranked 122nd.  In case you are wondering why the album was called Pearl, the answer is that Pearl was Janice Joplin's nickname.  She asked people to refer to her by that name. 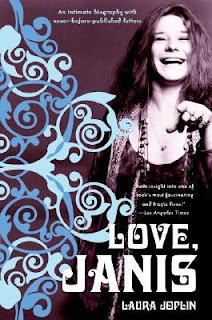