Piers Morgan versus the gun lobby 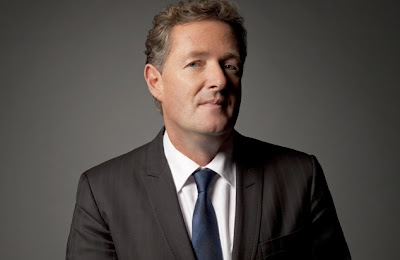 I'm not a huge fan of CNN talk show host Piers Morgan.  As a strong advocate of stricter gun control, however, I've been following his battle against the American gun lobby with great interest.  I think Morgan could be much more tactful in his approach and he shouldn't be calling his guests "incredibly stupid."  Nevertheless, I'm pleased that someone is standing up to those misguided Americans who believe it is their constitutional and God-given right to own semi-automatic weapons.

Since the fatal shooting of 20 children and six staff members at Sandy Hook Elementary School in Newtown. Connecticut on December 14th, Morgan has become increasingly passionate and vociferous in his calls for tighter gun control in the United States.  He has confronted staunch opponents of gun control face to face on his show, Piers Morgan Tonight.

The American gun lobby is exceedingly angry that after a string of shooting incidents in the United States, a non-American would have the audacity to suggest that the U.S. is in dire need of some gun control.  Morgan has enraged Tea Party types and the National Rife Association for even suggesting that gun laws should be strengthened and that semi-automatics should be banned. These xenophobic right wingers are especially angry that a foreigner, a non-American,  has expressed a strong opinion on the issue of gun control.

A petition against Piers Morgan was created on December 21st by Kurt N. of Austin, Texas (It's not surprising that Kurt is from the Lone Star State)..  It calls for the deportation of the 47-year-old British journalist on the grounds that he has undermined the Bill of Rights and the rights of American citizens.  Incredibly, over 90,000 people have now signed the petition on the White House website.  Here is what the petition looks like. 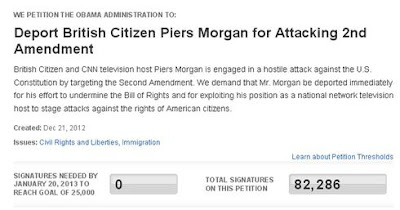 As Deborah Orr, a leading columnist for The Guardian in Britain put it, "It's hard to resist cheap jokes about Morgan.  Indeed, many in Britain have said they don't want him back  (Editor's note: There is another petition in Britain calling for Piers Morgan to remain in the United States.)  But it's the people who brush aside any degree of senseless slaughter in defence of their right to bear arms that are the joke."  Morgan himsself does not appear to be distressed or unfazed by the petition.  In fact, he seems to be enjoying all the fuss.  Yesterday on twitter, he wrote the following:

The gun lobby is extremely wealthy and very powerful.  The National Rifle Association is quite intimidating and relentless in its quest to prevent any softening of gun control laws. It is my firm belief that Wayne LaPierre, the head of the National Rifle Association has blood on his hands.  I cringed when I heard his call for armed guards at schools throughout the United States.  It seems his vision of America is that of the Wild West.  He has no compunction about turning his country into one huge O.K. Corral.  I wonder if the majority of Americans really want the U.S. to become a giant armed camp.  That is certainly not what the authors of the Constitution of the United States intended.  I'm sure they also did not intend for innocent school children to die because of the Second Amendment.

No one has been mentioning the First Amendment which guarantees freedom of speech in the United States, even for non-Americans such as Piers Morgan.  By the way, what is wrong with non-Americans expressing their opinions on circumstances in America?  They bring a different perspective to debates on  issues such as gun control based on the experience of their own countries.

The man behind the petition to deport Piers Morgan turned out to be Alex Jones, a 38-year-old Texan.  The bombastic Jones is a conservative radio host on 9/11 Truther.  He appeared on Piers Morgan Tonight debate the issue of gun control and had a veritable meltdown.  To view an exchange between Jones and Morgan, click on the link below.