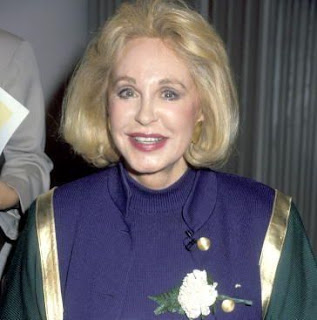 If fragile means somebody who can't cope, well, Joan coped.  I think she had a life that was very demanding of her.  Sometimes she had real problems in those days.  I think she never gave up.  She consistently tried to improve and overcome her problems, and eventually she did.  So that is not a person who is fragile.

- Eunice Kennedy Shriver, sister of Ted Kennedy
Interview with the Boston Globe in the year 2000

Joan Kennedy, the first wife of the late Senator Edward M. Kennedy, turns 76 years old today. She was born Virginia Joan Bennett on  September 9, 1936 in Riverdale, an area in the Bronx borough of New York City.  Her parents, Henry Wiggin Bennett, Jr., a British-born advertising executive and her mother, Virginia Joan (nee Stead) Bennett, married in New York City on June 8, 1935.  A second daughter, Candace Bennett, was born to the family in 1939. Candace is now Candace McMurrey and resides in Houston, Texas.

According to Laurence Leamer, author of the 1994 book The Kennedy Women: The Saga of an American Family, Joan's father and mother were both alcoholics.  It is certainly no secret that Joan herself  has struggled with alcoholism for years.  She lost her driver's licence for the first time in 1974 after a drunk driving arrest in Virginia.  After years of battling her addiction, she reached the lowest point of her life on a rainy night in February of 2005.  A passer-by  discovered her on a sidewalk in Beacon Hill, Massachusetts, bleeding and disoriented.after a drunken fall.  She was hospitalized with a concussion and a broken shoulder. In October of 2005, only months after she was found lying on the street, Joan underwent surgery for breast cancer.

As a teenager, Joan worked as a model during summer vacation.  She appeared on television as the Revlon Girl on Perry Como's show and on Coke Time with Eddie Fisher.  She also joined the actors union under the name J. Bennett to avoid confusing herself with the well-known Hollywood actress Joan Bennett.

In October of 1957, Joan's life was changed forever when she met Edward Moore "Ted" Kennedy, a dashing young University of Virginia law student.   Joan was a senior at Manhattanville College in Purchase, New York, the same college attended by Ted's sister Jean and his future sister-in-law Ethel.  It was Jean who introduced Joan to Ted at the dedication of a Manhattanville College gymnasium to the their sister, Kathleen Kennedy Cavendish, who had perished in a 1948 plane crash in France.  Joan and Edward Kennedy were married by Cardinal Francis Spellman on November 29, 1958 at St. Joseph's Church in Bronxville, New York.  Kennedy was 26 years old and his bride was 22.

Ted Kennedy graduated from law school and was admitted to the Massachusetts Bar in 1959.  In 1960, Ted's brother, John, ran successfully for the presidency of the United States and Ted managed his campaign in the Western states.  In November of 1962, Ted himself was elected U.S. senator from Massachusetts.

Joan and Ted had three children.  Their daughter, Kara Anne was born on February 27, 1960.  Their first son, Edward Moore Kennedy, Jr., was born on September 26, 1961 and their second son, Patrick Joseph Kennedy II, was born on July 14, 1967. Through the years, the family faced numerous trials and tragedies.

On November 22, 1963, President John F. Kennedy was assassinated in Dallas, Texas.  In 1964, Ted was injured in a plane crash and spent months in the hospital recuperating from a broken back. During Ted's convalescence,  it was Joan who went out on the campaign hustings to support her husband's re-election to the Senate.  In June of 1968, Ted lost a second brother to an assassin's bullet when Senator Robert Kennedy was gunned down  in Los Angeles while campaigning for the presidency.  Then, in July of 1969, Ted, became involved in a scandal that did irreparable damage to his marriage, his reputation and to his political career.

On the night of July 18, 1969, Senator Edward Kennedy attended a party for a group of women who had worked on his brother Bobby's campaign the previous year.  On the way home from the party, his car went off a bridge at Chappaquiddick Island on Maratha's Vineyard, Massachusetts.  His companion in the vehicle, 28-year-old Mary Jo Kopechne, drowned.  Kennedy escaped from the overturned car but failed to contact the police until nine hours had passed.  When  he reported the accident  the next morning, Kopechnie's body had already been found.

Ted pleaded guilty to leaving the scene of an accident and received a sentence of two months in jail, suspended.  Joan stood by her husband throughout this nightmarish ordeal.and even accompanied him to Mary Jo Kopechne's funeral in Pennsylvania.  Joan was pregnant at the time and a month later, she suffered her third miscarriage.

In 1973, when Edward Kennedy, Jr. was 12 years old, he was diagnosed with a form of bone cancer in his right leg.  On November 17, 1973, the leg was amputated.  Fortunately, Ted Jr. survived the cancer and will soon celebrate his 51st birthday.  A father of two, he is a lawyer and an entrepreneur.

Joan and Ted separated in early 1978.  Joan moved into her own apartment in Boston's Back Bay and pursued a master's degree in education.  Her alcoholism and Ted's philandering had put a terrible strain on their marriage.  Nevertheless, Joan campaigned for him during his run for the presidency in 1980, responding to question about her alcoholism and assuring the press that she would live in the White House if her husband were elected..  The following year, Ted and Joan Kennedy announced plans to divorce and their divorce became final in 1982.

Joan had always been reluctant to confront Ted about his reported womanizing.  In her 1985 biography, Living with the Kennedys: The Joan Kennedy Story, author Marcia Chellis quotes Joan as saying, "And so rather than get mad or ask questions concerning the rumours about Ted and his girlfriends, or really stand up for myself at all, it was easier for me to just go and have a few drinks and calm myself down, as if I weren't hurt or angry."

In 1991, Ted began dating Washington lawyer Victoria Anne Reggie, daughter of  longtime Kennedy ally, Louisiana judge Edmund Reggie.  On July 3, 1992, Ted married Victoria, a divorced mother of two, in a civil ceremony at his home in McLean, Virginia.  Joan, meanwhile, has never remarried.  In 2007, she was admitted to hospital for alcoholism after reportedly becoming inebriated at a charity event.

Senator Ted Kennedy died of brain cancer on August 25, 2009 at his home in Hyannis Port, Massachusetts, two weeks after the death of his sister Eunice.  Joan attended the funeral but remained out of the spotlight. In 2011, she suffered yet another tragedy when her only daughter, Kara, died of a heart attack at a Washington, D.C. health club after a workout.  Kara was 51 years old and had been diagnosed with lung cancer in 2002.  She underwent surgery to remove a part of her right lung.  The surgery was successful and she had been able to resume an active life.

Joan Kennedy is a talented pianist.  She has taught classical music and performed with the Boston Symphony Orchestra.  In 1992, she published a book titled The Joy of Classical Music: A Guide for You and Your Family.  I distinctly remember watching Joan's appearance on The Andy Williams Show many years ago.  She played the piano and joked with Williams and Henry Mancini.  (I looked it up.  She appeared on Andy's variety show in 1971.   An Associated Press report by Bob Thomas said "The piano keys stuck and she couldn't read the cue cards, but otherwise Joan Kennedy's debut as a television performer appears to have been a success."

Joan has faced numerous challenges and tragedies in her life.  After the assassinations of her brothers-in-law John and Bobby, Ted's safety became a serious concern for the family.  It wasn't easy being married to the last of the Kennedy brothers. Joan, however, tried to face her problems head on.  She sought psychiatric treatment at a time when it was frowned on in Washington.  She spoke openly about her battle with alcoholism and was not afraid to reveal that she had joined Alcoholics Anonymous.