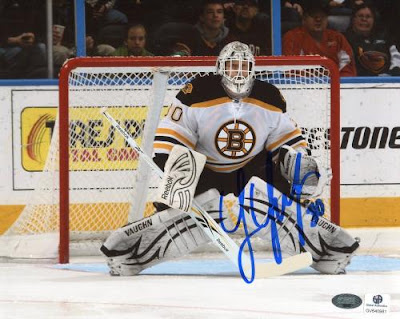 Tim Thomas is the 37-year-old goaltender for the Stanley Cup champion Boston Bruins.  Last season, he won the Conn Smythe Trophy as the NHL's outstanding player in postseason play.  Thomas is also a two-time Vezina Trophy winner for his superior net minding.  He has spent his entire NHLhockey career in Boston and he was a member of the U.S. men's hockey team at the 2010 Winter Olympics in Vancouver.

Born in Flint, Michigan, Thomas is one of two American players on the Bruins.  Recently he found himself embroiled in controversy when he refused to attend a celebration of Boston's Stanley Cup victory at the White House with U.S. President Barack Obama.  The event took place on January 23rd and Thomas was the only member of the team who was not present.

Boston Bruins President Cam Neeley stated that the organization was "disappointed" in its veteran goalie.  Neeley cited Thomas's "own opinions and political beliefs" as the reason for his failure to attend the White House event and General Manager Peter Chiarelli said that Thomas would not face disciplinary actions.  Thomas himself provided an explanation for his behaviour on his official Facebook page where he wrote the following message.

I believe the Federal government has grown out of control, threatening the Rights, Liberties, and Property of the People.

This is being done at the Executive, Legislative, and Judicial level. This is in direct opposition to the Constitution and the Founding Fathers vision for the Federal government.

Because I believe this, today I exercised my right as a Free Citizen, and did not visit the White House. This was not about politics or party, as in my opinion both parties are responsible for the situation we are in as a country. This was about a choice I had to make as an INDIVIDUAL.
"This is the only public statement I will be making on this topic. TT

Tim Thomas, of course, has every right to his political beliefs, although I believe them to be severely misguided.  As an American citizen, he can show his disagreement with Barack Obama by voting against the president on November 6.  He has the freedom to protest and to express his opinions in so many ways.  Why he chose to boycott a good-natured and innocuous celebration of his team's Stanley Cup championship is unfathomable to me.  It was not the time or the place to express political dissent.

As regular readers of Number 16 know, I do not agree with the policies of Prime Minister Stephen Harper.  If, however, I were invited to a charitable or celebratory event in Ottawa hosted by our prime minister, I would not hesitate to attend.

In his Facebook statement, Tim Thomas said his absence at the White House celebration was "not about people or politics or party."  Yet I think he was being disingenuous.  If a conservative Republic had been in the White House, I believe he would have attended the event.  His Facebook remarks reveal Thomas to be a radical right winger, a Tea Party type.  Thomas have different political views than President Obama, but he should respect the office of the presidency.

As a Canadian, I am bewildered why so many Americans are afraid of government per se.  Barack Obama simply believes that government can be a force for good.  That does not make him a revolutionary communist.  In his State of the Union speech, Obama came out swinging.  Remember how he pointed out that if it were not for government, the Hoover Dam and the Golden Gate Bridge would not have been built during the Great Depression.

In his Facebook comments, Tim Thomas capitalized the word individual.  Conservatives certainly have a great fondness for the word "individual."  While it is true that individual liberty and individual responsibility are important to a healthy society, citizens also have to work together for a purpose.  The problem with conservatives is that they tend to forget about the word "community."  The best societies are a combination of both individuality and a sense of community.  A society with only one and not the other is destined to be severely flawed.

I say thumbs down to Tim Thomas on this issue.  His behaviour was not classy at all.  It was petty and small-minded.  That's why Deval Patrick, the Governor of Massachusetts, described Thomas's conduct as an example of America's lack of  "basic courtesy and grace."  Tim may have a good goaltending record, but he needs to learn some manners.