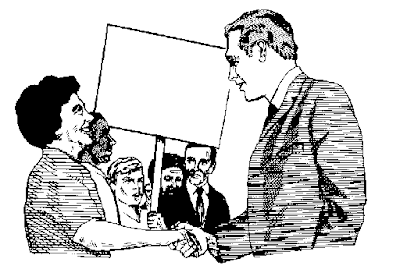 
The idea that you can merchandise candidates for high office like breakfast breakfast cereal - that you can gather votes like box tops - is . . . the ultimate indignity to the democratic process.

Adlai Stevenson was the Democratic presidential nominee in 1952 and 1956 and was defeated both times by Dwight D. Eisenhower.  He uttered those words in 1956 when television was starting to become a factor in U.S. election campaigns.  If he were alive today, he would be disgusted by the commercialization of politics and the proliferation of TV attack ads.  Yet, it's no secret that character assassinations and attack ads have always played  a role in democratic elections.  It's just that television and other mass media have intensified the darker side of politics.

One of the dirtiest presidential elections in American history was the 1884 contest between Republican candidate James G. Blaine and Democrat Grover Cleveland.  It was replete with scandals and mudslinging.  Blaine was dogged with accusations that as a Congressman from Maine, he had been corrupt in his dealings with the Little Rock & Fort Smith Railway and the Northern Pacific Railway.  His political adversaries ridiculed him as "Blaine, Blaine, James G. Blaine, the continental liar from the state of Maine."


﻿
﻿
Blaine's candidacy divided the GOP.  Some Republicans refused to endorse him as they considered him to be corrupt.  These reform minded  Republicans were dubbed "Mugwumps" and they came out in support of New York Governor Grover Cleveland.  Cleveland had a reputation as a corruption fighter and a reformer.  He campaigned under the slogan "Public Office is a Public Trust."

Cleveland and the Democrats, however, faced problems of their own when a paternity scandal surfaced during the heat of the election battle.  On July 21, 1884, an article in the Buffalo Evening Telegraph revealed that Cleveland, a bachelor at the time, had had an affair with a widow from Buffalo.  It alleged that he had fathered a son with the woman and that he had abandoned their child who was now ten years old.

The story broke nationally and Republicans seized on the opportunity to make political hay out of their opponent's indiscretion.  They began bringing children to Cleveland's campaign rallies and chanting, "Ma, Ma, where's my Pa?"  Cleveland admitted that he had relations with the woman but said that he knew of other men who could also have fathered the child.  He decided to take responsibility for the boy and send money.

In 1920, the Democratic candidate for President of the United States was James M. Cox, the Governor of Ohio.  Cox's Republican opponent was Warren G. Harding, another Ohioan.   James Cox was opposed to Prohibition, which had come into effect in the United States in January of 1920.  Harding, who supported Prohibition, attacked Cox's position with the slogan "Cox and Cocktails."  It is interesting to note that Cox's Vice-Presidential running mate in that 1920 election was 38 year-old Franklin D. Roosevelt.

U.S. ELECTION CAMPAIGNS BEFORE AND DURING THE GREAT DEPRESSION

During the 1928 U.S. election campaign, Republican candidate Herbert Hoover faced Alfred E. Smith as his Democratic opponent.  Hoover used the slogan "Hoover and Happiness Or Smith and Soup Houses."  Hoover won the election and became the 31st President of the United States. In October of 1929, the stock market crashed, the economy tanked, and the people were left with Hoover and soup houses.

The 1932 U.S. election was held during depths of the Great Depression.  Hoover ran for another term in office.  When he returned to his home state of Iowa on a campaign trip, he was accosted by an irate group of farmers holding banners that read, "In Hoover we trusted.  Now we're busted."

Optimism has long been a theme that candidates use during elections.  Voters certainly need and want to be hopeful.  If, however, the economy crashes before a candidate takes office, the candidate is expected to clean up the mess once he or she assumes power.  Often, however, there is no quick fix.  It takes time to turn an economy around.and people become impatient.  They take their frustration and disappointment out on their new leader.  "You offered us hope," they say.

For example, President Barack Obama didn't cause the Great Recession but he got blamed for it and was expected to turn things around in the blink of an eye.  During the 2008 election campaign Obama was definitely the candidate of  hope, but many Americans have forgotten that he also tempered hopeful expectations with a note of caution.  He declared that economic recovery wouldn't be easy and that it would require time.

As in the 2008 election, optimision played a integral part in the 1932 presidential contest in which Herbert Hoover sought re-electioni in the midst of the Depression.  Hoover procalaimed that "Prosperity is just around the corner."  Democrat Franklin D. Roosevelt's campaign song was the upbeat "Happy Days are Here Again" from the 1930 musical Chasing Rainbows.  The song reflected Roosevelt's cheerful personality in contrast to Hoover's more austere demeanour.

To listen to "Happy Days are Here Again," click on the link below.

Sometimes, during difficult times, voters are asked to reject change and to remain with the same steady hand at the helm.  In 1932, Herbert Hoover, had campaign buttons that read "Don't Swap Horses, Stand by Hoover."  Yet voters did swap horses.  They were looking for change rather than stability 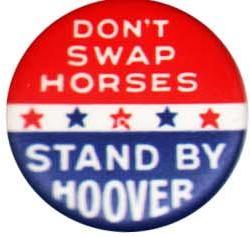 After leading Britain through World War II, Sir Winston Churchill faced the electorate in 1945. He ran on the slogan "Send HIm Back To Finish The Job." Although the war in Europe had ended in May of 1945. Churchill wanted to continue the wartime coalition until victory over Japan was achieved. Labour Leader Clement Atlee, however, advocated a new party-based government in Britain. On July 5, 1945, British voters went to the polls and elected a Labour government led by Atlee.  They rejected Churchill's steady hand and opted for change instead.

During the 1997 British election, the Labour Party used the campain slogan "Things can only get better."  It moved closer to the centre of the political spectrum and and called itself New Labour.  New Labour won in a landslide and its leader, Tony Blair, assumed the office of Prime Minister.  After years of Conservative government, Britain had chosen change.  The 43-year-old Blair became the youngest Prime Minister since Lord Liverpool in 1912.