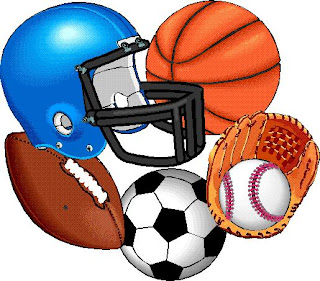 Number 16 has compiled a list of some of the most colourful and interesting sports nicknames. Just click on the "Sports" tab above to view the list. By the way, if you think I have overlooked any really good sports nicknames, please let me know and I will be happy to add them to my list.  Note: The list will be continually updated and additions will be made.  Having a library background, I will endeavour to be as accurate as possible.

Many sports nicknames are derived from the athlete's hometown (Rocky Marciano was known as the Brockton Blockbuster because he was from Brockton, Massachusetts) or ethnicity.  There are also some great stories behind some of those nicknames.  For example, pitcher Jim Palmer acquired the nickname "Cakes" or "Pancake Palmer" due to his fondness for pancakes and his habit of eating a stack of pancakes for breakfast before taking the mound.  During his break-out season of 1966, Palmer's  teammates on the Baltimore Orioles began calling him "Pancake Palmer."  In a span of eight games that season, Palmer recorded only one loss.  It happened, so the story goes, the only time he hadn't eaten pancakes.


Clint Benedict, nicknamed "Praying Bennie," has the distinction of being the first goaltender to wear facial protection in the National Hockey League.  About 30 years before Jacques Plante popularized the goalie mask, Benedict wore a leather nose-piece for five games during the 1929-30 season.  At the time, he was a member of the Montreal Maroons.

Benedict earned his "Praying Bennie" moniker due to his predilection for dropping to his knees in order to make a save.  Dropping to the ice was illegal in the NHL back in those days, but Benedict flouted the rules by pretending to pray on his knees.

So, baseball fans, it's the St. Louis Cardinals and the Texas Rangers in the World Series. I hope that the  Cardinals win it all. To think that my hometown Toronto Blue Jays had Chris Carpenter and then gave up on him. It's too bad they let him slip away.  Texas looks really good, however, and the Cards will have their work cut out for them.  My heart says St. Louis, but my head says Texas.

The Toronto Blue Jays should go after Joey Votto. They should pull out all the stops, do everything they can to entice him to come home to Toronto. Joey attended Richview Collegiate which just happens to be located in the area of the city where I grew up. That's not, however, the only reason I think the Jays should go for him. He's an outstanding player. Just imagine Joey playing first base for the Blue Jays. It would show the fans that the Jays are serious about contending.

What a disappointing season so far for Toronto Argonaut fans.  Yes, the Double Blue did squeak out a 31-29 win against the Calgary Stampeders on Friday, but they have failed to impress this season.  A win is a win and the Argos will happily take it.  Their record, however, is still an abysmal 4-11.

The Argos have to market this team better.  The lack of promotion has been woeful.   It's about time they created some buzz in this city, especially since the 100th edition of the Grey Cup is going to be played here in 2012.

Well, the Maple Leafs are off to a good start but it's far too early in the season to get excited.  They have a lot to prove.  In James Reimer, however, they may have a good goalie at last.  That could make all the difference.