The biggest problem for world economies is unemployment. - not debt.   When employment increases, the debt decreases. Conversely, as employment falls, the debt rises.  If people are laid off, or if they are afraid of losing their jobs, they do not spend money and the economy stagnates.  When the economy stagnates, more workers are laid off.  As workers lose their jobs and their income drops, they do not pay as much in taxes and revenue is lost.  It's a vicious cycle of misery!  The only way to escape that cycle is get people back to work.  Jobs are the first priority. 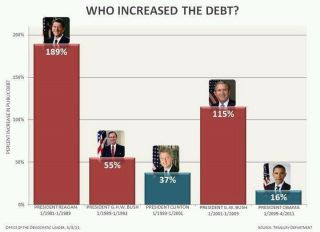 You can see that the debt increased the most under Ronald Reagan and George W. Bush.  It increased a whopping 189% under Ronald Reagan, 55% under George H.W. Bush, 37% under Bill Clinton, a whopping 115% under George W. Bush and 16% under Barack Obama.  The most right-wing conservative presidents preached fiscal restraint and ended up spending the most money on wars, prisons and tax breaks for billionaires.  Voters in the United States should consider these facts as they head toward the presidential election of 2012.

Here in Canada, Stephen Harper, a staunch economic conservative turned the surplus he was left with into a deficit.