Rudolf Hess: Hitler's deputy is in the news again 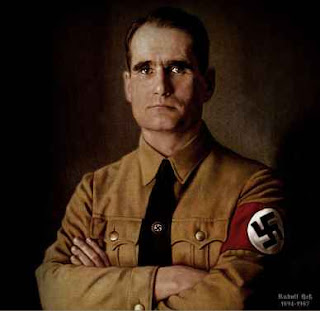 Look at the above photo of Rudolf Hess.  Doesn't he have a villainous appearance - and it's not just the Nazi uniform?  Even if he weren't wearing a swastika armband, I'd take him for a criminal.  His eyes are beady and evil-looking.  Almost 24 years after his death, the former Nazi bigwig is in the news again.

On July 21, 2011, it was announced that the remains of Rudolf Hess. Hitler's one-time deputy, had been exhumed and would be cremated.  It was revealed that Hess' remains had been dug out of its marked grave in a small Bavarian town.  The reason?  Well, the grave, in Wunseidel, Germany, had become a shrine, a place of pilgrimage for neo-Nazis.

Every year since Hess' demise in 1987, latter-day Nazis have held demonstrations on August 17th, the date of his death. They raise their hands in a Nazi-salute and lay wreaths at his gravesite.    Understandably, the town's authorities decided to put an end to that.  A court order was issued in 2005 outlawing such gatherings of right-wing extremists, but the neo-Nazis continued to converge on the town.  The town, therefore, obtained an agreement from the the family and the church to destroy the grave.

At first, Hess' granddaughter opposed the exhumation of her grandfather's bones.  The board of the Wunseidel Evangelical Church, which is responsible for the cemetery, persuaded her to revoke her lawsuit against such an action.  She gave her consent for the grave to be removed after it was explained to her how it had become a neo-Nazo shrine.

Karl-Willi Beck, Wunseidel's mayor, confirmed that cemetery administrators had removed Hess' bones and his gravestone in the early hours of July 20, 2011.  Beck, 56, said "It was the right thing to do."  The mayor also stated that Hess' bones would be cremated and scattered over a lake.

In his will, Hess decreed that he wished to be buried at the churchyard cemetery at Wunseidel, the location of the family burial plot of his parents and the place where the Hess family had a vacation home.  The supervisor of the local Lutheran church at the time did not stand in the way of Hess' request.  Lutheran church authorities in Germany declared that they could not ignore the wishes of deceased, despite his atrocious crimes.  The deputy Nazi leader was therefore buried at the Wussidel cemetery and the words Ich hab's gewagt ("I dared") were inscribed on his gravestone.


Rudolf Hess was born in Alexandria, Egypt in on April 26, 1894, the eldest of four children.  His father, Johann H. "Fritz" Hess, was a wealthy German importer from Bavaria.  His mother, Klara Munch, was of Greek descent and belonged to the Georgiadis family of Alexandria.  At the time of Rudolf Hess' birth, his family lived in affluence on the Egyptian coast near the city of Alexandria.  They visited Germany on a frequent basis and the children became familiar with German language and culture.  In 1908, the family returned to Germany.

During World War I, Hess served as an infantryman in the German armed forces.  He was wounded twice in combat, the first time during the Battle of Verdun on June 12, 1916.  The following year, on July 23, 1917, he was wound for a second time while fighting in Romania.  In 1918, after being promoted to the rank of lieutenant, he then transferred to the German Army Air Service and was trained as pilot.  When the war ended, he studied at the University of Munich and involved himself in nationalist politics.  After listening to a speech by Adolf Hitler. he joined the Nationalist Socialist Party in 1920 as one of its first members.

Hess commanded a group of militants known as the SA during Hitler's Beer Hall Putsch in Munich on November 8 and 9, 1923.  This was a Nazi attempt to overthrow the government of Bavaria and establish a right-wing one in its place.  When the coup failed, both Hitler and Hess were arrested.  Hess was sentenced to seven and a half months at Landsberg Prison.  While the two men were imprisoned, Hess acted as Hitler's personal secretrary.  He assisted Hitler in writing his book Mein Kampf, taking dictation and transcribing the Nazi leader's words.

A dedicated Nazi and a close friend of Adolf Hiltler, Rudolf Hess rose rapidly in the party hierarchy.
In early 1933, after Hitler became Chancellor of Germany and assumed dicatorial powers, Rudolf Hess was named Deputy to the Fuhrer.  He was tthe third most powerful Nazi beind Hitler and Hermann Goering.

Rudolf Hess made international headlines and caused a sensation when he flew a Messerschmitt fighter plane from Bavaria to Scotland on May 10, 1941.  The solo flight was an apparent attempt to negotiate peace with Britain.  Hess, however lost his bearings and ran low on fuel.  He was forced him to bale out of his aircraft.  He made a parachute landing in a field near Eaglesham, south of Glasgow and broke his ankle.  A local ploughman discovered him in the field.

Hess claimed he had an important message for the Duke of Hamilton, a member of the Anglo-German Fellowship, whom he had only met once, at the Berlin Olympic games in 1936.  The British would hear none ot it, vowing there would be no negotiations with Nazis.  Germany remained silent on the matter until a day later when German radio stations issued a statement that Hess had been experiencing "hallucinations."

Rudolf Hess found himself arrested as a POW and spent the rest of the war in captivity. He was stripped of his party membership and rank and Martin Bormann replaced him as Hitler's deputy.  It remains a matter of debate as to whether Hitler gave his approval to Hess' ill-fated flight.  It is interesting that the flight took place on the eve of the German invasion of Russia in June of 1941.  Was Hess trying to prevent Germany from fighting a war on two fronts?

At the Nuremberg trials, Rudolf Hess was found innocent of war crimes and crimes against humanity.  He was, however, convicted of crimes against peace (planning aggressive war) and conspiracy to commit crimes against peace.  He received a life sentence and was incarcerated at Spandau Prison in what was then West Berlin.


For many years, Rudolf Hess refused prison visits from is family. It wasn't until December 24, 1969 that Ilse and Wolf visited with Hess for the first time since his incarceration. Due to illness, Hess had had a change of heart and his wife and son went to see him at the British Military Hospital in Berlin. The visit marked the first time Wolf had been alone with his father since 1941.

Rudolf Hess was found dead in a secure area of the prison on August 17, 1987.  The 93-year-old had an electrical cord wrapped around his neck and his death was recorded as a suicide by asphyxiation.  A coroner's report concluded that Hess had strangled himself with the extension cord, although it has been alleged that his Soviet captors were responsible for his death.  Hess' lawyer claimed that the British had murdered him to prevent him from divulging secrets about his 1941 wartime flight.

Since Hess' death, there have been many conspiracy theories.  Some find it difficult to believe that an elderly and frail nonagenarian could have engineered such a suicide at a closely guarded prison.
Hess was the last prisoner at Spandau Prison.  Soon after his passing, the infamous prison was demolished.